I stumbled across this one looking for caption contest photos: 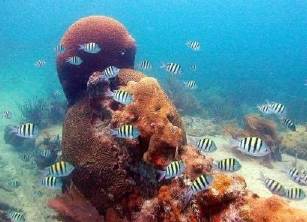 (AP Photo/University of North Carolina at Wilmington, Dr. Steven Miller)
Yahoo! News – Top Stories Photos – AP
The picture is interesting, and certainly quite beautiful, but the caption is bizarre:

“A report by the Pew Oceans Commission called for a new federal agency to manage America’s oceans. “

Now, how exactly is a US agency going to manage the oceans? First of all, while I’m as nationalistic as the next guy, I don’t think the US actually owns any oceans, although we do claim territorial rights to 12 miles off our coasts. Secondarily, how on earth would an agency go about managing the oceans, anyway? They’re rather, well, large.

The Pew Oceans Commission, of which I had never previously heard but of which I am rather amused to learn that Leon Paneta is the chairman, has some info on their website, including the complete report. I don’t have time or inclination to read all 144 pages but the Executive Summary provides some insights. While speaking in platitudes about large goals that most would agree on, the commission calls for sweeping legislation that would seem to virtually eliminate state control over commerce, compartmentalize problems, and cost untold sums of money. I’d be interested in feedback on this from people who study this issue; I just stumbled upon this by accident.

FILED UNDER: Law and the Courts, Legislation, North Carolina