What Happens If All The Bush Tax Cuts Expire?

Here's why nobody in Washington will allow the Bush Tax Cuts to expire. 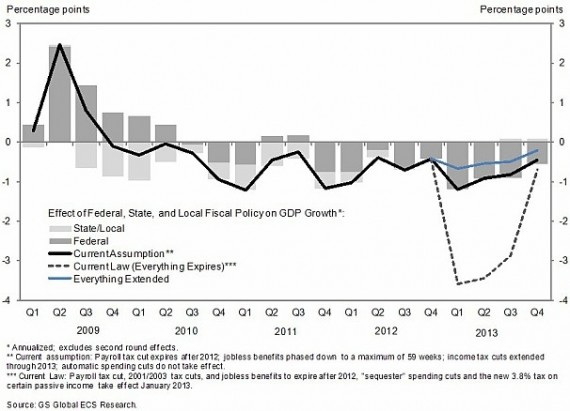 Based on this from Brad Plumer, and the chart he got from Jonathan Bernstein, it wouldn’t be pretty:

What will the economy look like in 2013? A great deal depends on what Congress decides to do at the end of this year. Remember, the Bush tax cuts are expiring, the payroll tax holiday will sunset, and a bunch of new spending cuts under the debt-deal “sequester” are scheduled to kick in. Coming all at once, that’s a potentially big drag on growth.

To put this in perspective, the Federal Reserve expects the economy to grow at a roughly 2.9 percent pace in 2013. If Congress does nothing at the end of this year, much of that growth could be wiped out, and there’s a strong possibility that the United States could lurch back into recession. (Granted, a lot could depend on how the Fed reacts in this situation.)

On the flip side, as Ezra discussed in Thursday’s Wonkbook, letting all of the tax cuts expire and spending cuts kick in would also cut the U.S. deficit considerably: “Public debt falls from 75.8 percent in 2013 to 61.3 percent in 2022.”

Given the fact that we’ve already seen evidence that the 2.5% growth forecast for this year may turn out to be overly optimistic, we probably put to much stock in the 2.9% forecast for 2013. If growth (not factoring in the impact of the changes coming on December 31) is less that 2.9%, then the impact of what Plumer calls “Taxmageddon” will be even worse.

In many ways, this is the same dilemma that the Obama Administration and the lame duck Congress faced in December 2010 when the cuts were scheduled to expire for the first time. The economy was growing then too, and beginning to recover from the Great Recession, but growth was slow and job growth was anemic at best. Allowing tax rates to rise in January 2011 as the law would have allowed would have sucked billions of dollars out of the economy just when the economy was trying to recover. As we saw, the opening months of 2011 were slow-growth to begin with, had the tax cuts not been extended it’s entirely possible that we would have been pushed into another recession. At the very least, we would have seen slow growth and the job market would have taken even longer to recover. Today’s 8.1% unemployment rate very well could have been closer to 9% under those circumstances. The same goes with the decision to extend the payroll tax holiday. It was, in part, because of the fear of what would happen to the economy that President Obama ended up agreeing to extend all the tax cuts, and it was probably the right decision at the time even though it did involve breaking a campaign promise and setting up a pattern of giving in to GOP demands that would go on to make future negotiations more difficult.

When November and December 2012 roll around, the President and Congress will be faced with the same dilemma. Quite honestly, I don’t believe that allowing the tax cuts to expire is going to be considered a serious position on either side of the aisle, not under current economic conditions. As was the case in 2010, the big point of contention will be what happens to the tax rates for those making more than roughly $200,000 per year. My guess is that what happens there will depend greatly on what happens in the November election but that if the GOP really wants to push the point they will be able to once again get the President to agree to a full extension rather than a limited one. In the end, it’s a game of chicken and when both sides already know that neither one wants to allow the tax cuts (or the payroll tax holiday) to expire because of the impact it would have on the economy, that gives the GOP a significant negotiating advantage. So, count on the Bush Tax Cuts staying around for at least another two years absent some kind of comprehensive tax reform in the first year in of office whoever happens to take the oath of office on January 20, 2013. At that point, shouldn’t we start calling them the Obama Tax Cuts, or maybe the Romney Tax Cuts?