WHEN DID THEY GET SO GOOD?

FredÃ‚ Kaplan recounts the history of defense transformation over the last 20 years, noting how much the culture has changed just since Desert Storm:

Operation Desert Storm was really two warsÃ¢€”the air war and the ground warÃ¢€”each fought autonomously and in sequence. Gulf War II was an integrated war, waged simultaneously and in synchronicity, on the ground, at sea, and in the air. The vast majority of airstrikes, from Air Force bombers and attack planes as well as Navy fighters, were delivered on Iraqi Republican Guards, in order to ease the path of U.S. Army soldiers and Marines thrusting north to Baghdad.

Another new thing, which started in Afghanistan and continued in Iraq, was the systematic inclusion of the so-called “shadow soldiers,” the special operations forces. The 1986 Goldwater-Nichols Act, which was best-known for giving new authority to the chairman of the Joint Chiefs of Staff, also made special ops a separate command, with its own budget. (Before then, each branch had its own special-ops division, which tended to get the big boys’ leftovers, in terms of money, equipment and everything else.)

As someone who has been studying and writing about this issue for over a decade, I must say how surprised I am at the extent of this cultural shift. Frankly, as late at the September 2001 Quadrennial Defense Review, most of the talk of “transformation” struck me as mainly just that: talk. Little has happened to change the outward appearance of the force structure and materiel procecurement process. And a desert war in Iraq certainly makes it easier to look good, since our force is still overly weighed, in my judgment, to the ability to fight massive land wars of which this continues to be a rare exception. Nonetheless, the culture has clearly changed. Jointness is more than a buzzward to which senior leaders must pay lip service: it is becoming reality. 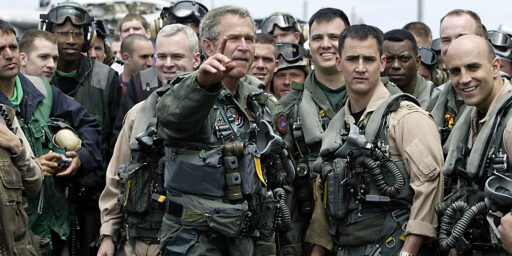