Why Having A Gun For Self Defense Matters

When it comes down to the point where you have to defend yourself and your children:

LOGANVILLE, Ga. —  A woman hiding in her attic with children shot an intruder multiple times before fleeing to safety Friday.

The incident happened at a home on Henderson Ridge Lane in Loganville around 1 p.m. The woman was working in an upstairs office when she spotted a strange man outside a window, according to Walton County Sheriff Joe Chapman. He said she took her 9-year-old twins to a crawlspace before the man broke in using a crowbar.

But the man eventually found the family.

“The perpetrator opens that door. Of course, at that time he’s staring at her, her two children and a .38 revolver,” Chapman told Channel 2’s Kerry Kavanaugh.

The woman then shot him five times, but he survived, Chapman said. He said the woman ran out of bullets but threatened to shoot the intruder if he moved.

“She’s standing over him, and she realizes she’s fired all six rounds. And the guy’s telling her to quit shooting,” Chapman said.

The woman ran to a neighbor’s home with her children. The intruder attempted to flee in his car but crashed into a wooded area and collapsed in a nearby driveway, Chapman said.

Deputies arrested 32-year-old Atlanta resident Paul Slater in connection with the crime. Chapman said they found him on the ground saying, “Help me. I’m close to dying.” Slater was taken to Gwinnett Medical Center for treatment.  Chapman said Slater was shot in the face and neck.

In February, Slater was arrested on simple battery charges, according to the Gwinnett County Sheriff’s Office. He has been arrested six other times in the county since 2008.

At its most fundamental level, this is what the Constitutional right to keep and bear arms is all about. Those of you who would deny that right to your fellow citizens are essentially saying that it’s okay for criminals to victimize the innocent, and that the innocent don’t have the right to fight back.

FILED UNDER: Guns and Gun Control, US Politics, Atlanta, Right To Bear Arms, self defense 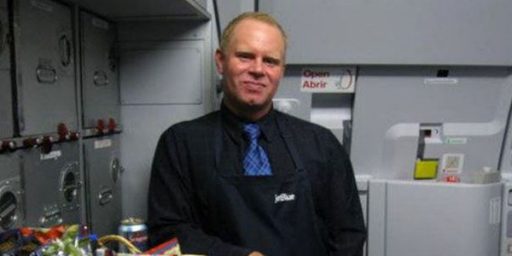