With Congress On Recess, The Fate Of DACA Looks Grim

The prospects for extending legal protections for DACA beneficiaries are getting grimmer by the day. 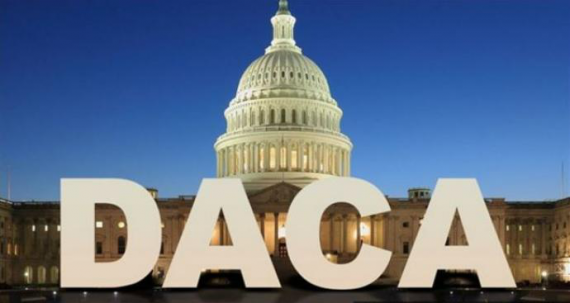 Before leaving on a weeklong recess for President’s Day, the Senate rejected four separate proposals to provide protection to the beneficiaries under former President Obama’s Deferred Action For Childhood Arrivals (DACA) program that was announced in the summer of 2012. As things stand now, the prospects that the outlook for these immigrants, more broadly known as “Dreamers,” will end up receiving some kind of legal protection prior to the anticipated March 5th expiration of the DACA program are not looking good at all:

WASHINGTON — Congressional leaders struggled on Friday to find a path forward on legislation to protect hundreds of thousands of so-called Dreamers after the Senate’s efforts collapsed into a partisan morass. Immigrant rights advocates, losing faith in the legislative process, nervously turned their attention to the courts.

On Capitol Hill, both Democrats and Republicans said the future of the Dreamers — young undocumented immigrants who were brought here as children — may not be settled anytime soon. With Congress gone for a weeklong recess, there is no immediate opportunity for lawmakers to regroup after Thursday’s defeat of three Senate bills, including one backed by President Trump.

In the House, Republican leaders are trying to corral support for legislation that takes an even harder line than a White House-backed bill in the Senate, which got only 39 votes on Thursday. But the House measure does not yet have enough support to pass, and even if it does, it will almost certainly be dead on arrival in the Senate.

In the Senate, some lawmakers — including Senator John Cornyn of Texas, the No. 2 Republican — have raised the possibility of pairing a simple provision protecting the Dreamers from deportation with funding for the president’s proposed wall at the southern border with Mexico, and slipping that package into a large spending bill that must pass in late March.

“The clock is still ticking,” Mr. Cornyn said. “We kind of had test votes here. We kind of know what the tolerance is for different ideas.”

Meanwhile, a March 5 deadline looms. That is the day that the Obama-era Deferred Action for Childhood Arrivals program, or DACA, is set to expire. The program protects about 690,000 Dreamers from deportation and allows them to work, study or join the military. But Mr. Trump rescinded DACA, leaving it to Congress to find a replacement.

“I don’t know what the way forward is,” said Senator Jeff Flake, Republican of Arizona, who has for years advocated an overhaul of the United States’ immigration laws.

The uncertain outlook in Congress is matched by uncertainty in the courts. Two federal courts have blocked the Trump administration from ending DACA, but the Trump administration is seeking to have those court rulings overturned. On Friday, the Supreme Court convened a closed-door conference to consider whether to bypass appellate courts and take up the issue immediately.

If that happens, legal experts say, the administration will almost certainly prevail.

For his part on Friday, Mr. Trump continued to blame Democrats for the morass, although 14 Republicans voted against his plan on Thursday.

Immigration has long been one of the most intractable issues in Washington. The Senate Republican leader, Senator Mitch McConnell of Kentucky, had set aside this week for what was supposed to have been a freewheeling debate that would allow senators to build a bipartisan immigration bill from scratch.

Instead, the debate devolved into the usual partisan bickering. The White House worked aggressively to defeat a measure backed by the Common Sense Coalition, a bipartisan group of centrists. Their measure would have offered the Dreamers a path to citizenship, while committing $25 billion for border security, including the president’s proposed wall, over a 10-year period. It fell six votes short of the 60 needed to advance in the Senate.

“We still have time,” Senator Joe Manchin III, Democrat of West Virginia and a chairman of the coalition. “I think that the people are totally committed to it are going to want to get back together.”

But even if the group does get back together, it will almost certainly run into trouble coming up with an immigration plan that will meet Mr. Trump’s conditions. The president wants to severely limit family-based migration and cancel the diversity visa lottery, which aims to bring in immigrants from underrepresented countries.

Republicans and Democrats agree that there is now a very slim chance that legislation will pass offering citizenship to the Dreamers. With the Senate debate over, the White House is backing the House measure, which proposes a more far-reaching rewrite of immigration laws than even the president considered.

As noted, the March 5th deadline is somewhat muted by the fact that there have been injunctions put in place by Federal District Courts in San Francisco and New York City that bar the Trump Administration from taking any action against DACA beneficiaries. That injunction has a somewhat limited impact in that they offer no protection to people whose protected status under DACA lapses based on the terms established when the program was first established. Under those terms, beneficiaries were required to renew their status every two years, but the Administration has not accepted any applications for renewal since the change in policy was announced in September and neither injunction requires them to do so. The injunctions also don’t require the Administrations to accept new applications prior to the expiration of the program. By some estimate, this means that thousands of DACA beneficiaries have fallen out of status over the past five and a half months and are currently subject to being deported at any time. For these people, only a law passed by Congress, or the unlikely event that Trump may decide to change his mind and either reinstate DACA or extend the program to give Congress time to act and allow past beneficiaries to reapply during that period. Finally, the Federal Government appealed the San Francisco case directly to the Supreme Court under a rule that allows parties to bypass the Circuit Court of Appeals assuming the Justices agree to accept the case. We could learn as early as tomorrow if that has happened, and it’s also possible the Court will issue a ruling on whether the injunction should remain in place. If the Justices lift the injunction, then the March 5th deadline would once again loom for all of the estimated 700,000 people currently protected under the DACA program.

As things stand, it’s difficult to see a viable path forward for any DACA proposal. Even if the Common Sense Coalition, whose original proposal came closest of all the proposed bills to sixty votes last Thursday, comes up with a plan that can get enough vote to pass the Senate, it’s unlikely that any such proposals could make it through the House of Representatives. Even the proposal that the White House put forward last month, which includes not only DACA protections but also funding for the border wall, elimination of the visa lottery, and restrictions on so-called “chain migration,” has received a negative reaction due to the fact that it would permit DACA beneficiaries to eventually apply for citizenship. Alternatively, the proposal that the immigration hardliners in the House are pushing would bar DACA beneficiaries from becoming citizens and, in addition to the other parts of the White House proposal, mandate that all employers participate in the E-Verify program to ensure that only people legally entitled to work are can gain employment. That proposal, of course, would not make it through the Senate and would likely be opposed by many Senate Republicans as well as the entirety of the Senate Democratic Caucus. President Trump, meanwhile, has said he would veto any bill that didn’t include all the provisions contained in the White House proposal, and it’s unlikely that Congress would be able to override that veto.

In theory there should be room for some kind of compromise here that could pass both the House and the Senate and which would be signed into law by the President. Such a proposal would likely combine the elements of the Common Sense Coalition’s proposal, the White House’s proposal, and even the proposal being advanced by House GOP hardliners in a way that everyone would find acceptable. For that to succeed, though, all the parties need to sit down in a room and actually try to hammer out an agreement, and that’s only likely to happen if the President himself takes the lead and brings everyone to the table. Right now, though, it seems apparent that President Trump is not inclined to do that and he doesn’t seem to be especially interested in the fate of the DACA beneficiaries to intervene on their behalf, Instead, he’s more interested in using the issue to bash Democrats for the recent failure of the reform bills in the Senate even though its apparent that it was Trump’s veto threat that largely derailed negotiations and doomed the fate of any of the proposals that the Senate voted on last week. Absent that kind of intervention, I honestly can’t see how Congress can get anything passed before March 5th, which means that DACA will effectively die and would officially die if the Supreme Court decides to life the injunctions mentioned above. 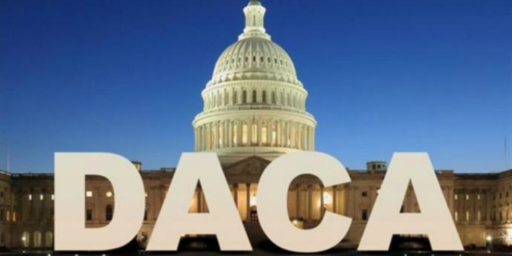