A Booming Jobs Market For February

A better than expected jobs report for February, but wage growth slowed for the month. 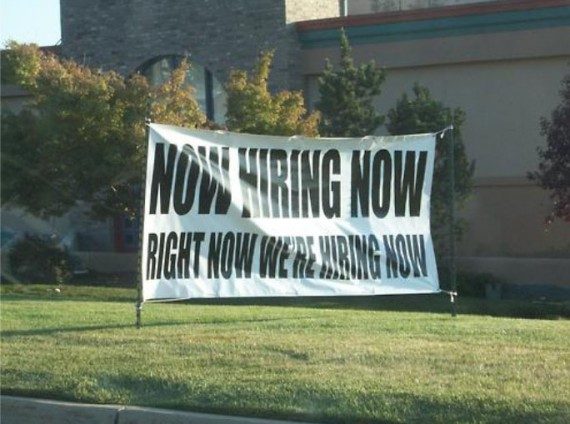 Heading into today’s release of the second Jobs Report of the new year, expectations were for a relatively modest increase of about 200,000 new jobs and a stable topline unemployment rate. In other words, a better report than what we saw for the January figures, but nothing all that spectacular. One reason for the expectations of a slightly better report was the fact that February saw much more moderate weather across the country than the previous month, and that typically causes an uptick in both hirings and in people actively looking for work. Additionally, as I noted in my post about the December report, the jobs market seems to be at the point where expecting massive increases in job creation are probably out of the question. Instead, we’re likely to see modest but healthy jobs growth, but not anything spectacular. As it turned out, though, February saw one of the best months for job gains that we’ve seen in quite some time:

In February, the unemployment rate was 4.1 percent for the fifth consecutive month, and the number of unemployed persons was essentially unchanged at 6.7 million. (See table A-1.)

The civilian labor force rose by 806,000 in February. The labor force participation rate increased by 0.3 percentage point over the month to 63.0 percent but changed little over the year. (See table A-1.)

In February, total employment, as measured by the household survey, rose by 785,000. The employment-population ratio increased by 0.3 percentage point to 60.4 percent in February, following 4 months of little change. (See table A-1.)

Retail trade employment increased by 50,000 over the month. Within the industry, employment rose in general merchandise stores (+18,000) and in clothing and clothing accessories stores (+15,000). However, over the past 4 months, which traditionally
see the bulk of the holiday hiring and layoff, employment in these industries has changed little on net. Elsewhere in retail trade, building material and garden supply stores added jobs over the month (+10,000).

Employment in professional and business services increased by 50,000 in February and has risen by 495,000 over the year. Employment in temporary help services edged up over the month (+27,000).

Employment in other major industries, including wholesale trade, transportation and warehousing, information, leisure and hospitality, and government, showed little change over the month.

In addition to the numbers above, the Bureau of Labor Statistics reported that total nonfarm payroll employment for December was revised upward from +161,000 to +175,000 and that the number for January was revised upward from +200,000 to +239,000. This represents a net upward revision for the two months combined of +54,000 jobs. Combined with this month’s jobs numbers, this puts the average jobs growth for the past three months at +192,000 net jobs created per month, an improvement from where we stood a month ago but still not entirely impressive. For all of 2017, we now have a final total of +1, 919,000 net jobs created for a monthly average of +159,916 (rounded) net jobs created per month. Based on these numbers, we can say that 2017 was a fairly decent year for jobs growth and one that the Administration will no doubt highlight in its comments on today’s numbers. At the same time, it’s worth noting that job growth for the first year of Donald Trump’s Presidency was slower than it was during the final year of Barack Obama’s Presidency and that average jobs growth for 2017 was lower than it has been since 2010 when the economy was still shaking off the impact of the Great Recession. As for 2018, the numbers to date show a net of +552,000 jobs created based on the numbers we have available, which of course will be revised in subsequent reports. This makes for an average jobs growth over the first two months of the year of +276,000

Looking deeper into the numbers, the average workweek across the board was increased by one-tenth of an hour to 34.5  hours while average hourly earnings rose 4 cents to $26.75. Over the year, average hourly earnings have risen by 68 cents or 2.6%. These are positive numbers, but slightly less so than what we saw in January. As I’ve said before, this slow jobs growth is potentially a sign that the jobs market is becoming competitive enough that employers are finding it necessary to increase wages and hours to retain or attract workers. Additionally, the topline U-3 unemployment rate was unchanged from last month, the long-term unemployment/underemployment number, meanwhile, was essentially unchanged and both the labor force participation rate and employment/population ratio remained rose slightly for the month. Perhaps most positively, the number of persons counted as long-term unemployed decreased by 369,000. As has been the case for the better part of the past year, the biggest concern in the numbers isn’t the jobs numbers but wage growth, which remains tepid at best but seems to be showing signs of picking up. In that regard, it’s worth noting that the numbers also indicate that the number of people actively looking for work was up measurably in February from the previous month, although that again could be due to the fact that February was a much milder month weather-wise.

The Washington Post‘s Danielle Paquette notes the better than expected jobs numbers, but also points to the somewhat disappointing growth in wages:

The U.S. economy added 313,000 jobs in February, smashing expectations, according to Friday’s employment report from the Bureau of Labor Statistics.

The unemployment rate held steady for the fifth straight month at 4.1 percent, a 17-year low. Average hourly pay grew by 2.6 percent from this time last year, a drop from January’s year-over-year improvement of 2.9 percent.

February brought the most jobs in a month since July 2016, when the economy grew by 325,000 positions, government data show. Analysts appeared split over what caused the higher-than-projected surge of jobs.

“This is a result of fiscal stimulus — in other words: a $1.3 billion tax cut,” he said. “Businesses are making decisions on a forward-looking basis. Even if the dollars aren’t in the pockets of companies yet, they’re making plans.”

Cathy Barrera, head economist at ZipRecuiter, an employment site, questioned that interpretation, asserting it’s still too early to see an impact from the tax measure.

“Really for businesses, what matters is demand for their products,” she said. “If demand for products hasn’t gone up, there’s not more work for these companies to be doing.”

“President Trump’s tax reform continues to boost economic confidence with more than 400 companies handing out bonuses, raises, or other benefits to more than 4 million Americans,” he said.

Year-over-year wage growth, she said in an email, “needs to exceed 3.5 percent for a substantial amount of time for workers to begin to claw back losses in the labor share of income they’ve felt during and since the Great Recession.”

CNBC, meanwhile, points to the numbers as indicating what some analysts call a “Goldilocks economy”:

The surge in job creation coming without an accompanying rise in wage pressures fits in well with the Wall Street hopes of a “Goldilocks” economy.

Christopher Rugabar at the Associated Press, meanwhile, speculates that there could be a link between these numbers and the business optimism that followed the passage of the Republican tax package in December:

February’s hiring surge points to a U.S. job market that remains robust, and might even be strengthening. Job growth has averaged 242,000 over the past three months, above 2017-s monthly pace of 187,000. The broader economy is also showing unusual resilience: Its expansion since the Great Recession ended nearly nine years ago is the third-longest on record.

In addition, the Trump administration’s tax cuts appear to have lifted optimism among consumers and businesses. U.S. employers have also benefited from a strengthened global economy.

The picture cast by Friday’s jobs report offered a mixed one for the Federal Reserve, which is seeking to raise short-term interest rates at just the right pace: Enough to forestall inflation but not so fast as to slow economic growth.

The Fed is considered certain to raise rates when it next meets in two weeks. The question is whether it will do so a total of three times this year — or, in light of the job market’s strength and the prospect of a pickup inflation ahead, four times.

“The February jobs report was as good as it gets,” Doug Duncan, chief economist at Fannie Mae, said. “For the Federal Reserve, the report should help soothe concerns over an overheating economy.”

The consistently strong pace of hiring has led many more people who had been on the sidelines to start looking for work. Most of those new job seekers found work in February, leaving the number of unemployed little changed. The proportion of adults who either have a job or are looking for one rose to 63 percent from 62.7 percent.

With the unemployment rate low and many businesses struggling to find people to hire, some companies are offering higher pay.

“It’s getting more competitive in this market,” Peters said. “There are more IT jobs and not as many people.”

In the meantime, economists are calculating how the Trump administration’s decision Friday to impose a 25 percent tariff on steel imports and a 10 percent tariff on aluminum might affect the job market. The Trade Partnership, a consulting firm, estimates that the tariffs could eliminate roughly 145,000 jobs. Still, the administration has opened the door to so many possible exemptions from the tariffs that an accurate estimate of the impact on jobs is all but impossible.

Steel and aluminum producers would presumably hire more people. But those gains would be more than offset, Trade Partnership calculates, by sharp job losses among companies that use the metals, such as automakers, packaged food companies and those that make industrial machinery.

Most economists expect growth to pick up in the coming months and to accelerate inflation slightly by year’s end. They have forecast that the economy will expand at just a 2 percent annual rate in the January-March quarter before topping 3 percent in the next two quarters.

For the most part, though, this was a very good jobs report, and the numbers for the first two months of the new year seem to be encouraging to say the very least. Whether it will continue into the future remains to be seen.