Could the GOP go into Tampa next August not knowing who their nominee will be? It's possible, but not probable. 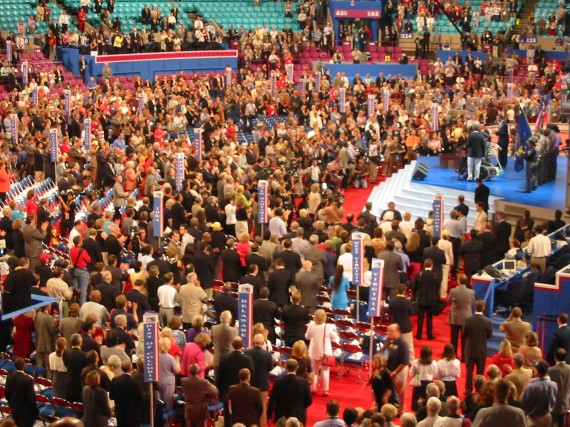 Perhaps the favorite fantasy of political writers in a Presidential election year is the idea of a brokered convention where no candidate ends the primary season with a sufficient numbers of delegates to claim their parties nomination. In 2008,  there was some thought that the close race between Hillary Clinton and Barack Obama, combined with Democratic Party delegate allocation fights in states like Florida, would lead to a brokered convention in Denver. In the end, of course, Barack Obama ended up winning enough, delegates and had support from enough superdelegates, that he was able to win the nomination on a first ballot. That doesn’t mean pundits don’t stop thinking about it, though. A brokered convention played a pivotal role in a late series episode of The West Wing, for example. To some extent, most conventions before 1968 or so were “brokered” in the sense that most of the delegates were awarded outside the primary system, but we haven’t had a multi-ballot convention in the Democratic Party since 1952, and in the Republican Party since 1948. The odds it will happen this year seem infinitesimal.

Nonetheless, that isn’t stopping pundits from speculating. In a piece that came out at Salon just before the Thanksgiving holidays, Howard Megidal argues that new GOP delegate allocation rules make a brokered convention more likely, and that the GOP needs for it to happen:

Thanks to the new GOP rule,  any primary or caucus held before April 1 must allocate delegates proportionally.

So when McCain won nine of 21 states on Super Tuesday (Feb. 5), with more than 50 percent of the vote in just three of them, the winner-take-all system gave him 608 of the 1,081 delegates at stake on the day. That meant total delegate haul — more than 56 percent of those available — was greater than his share of the vote in any single state that day. It also meant he received more than 57 percent of the delegates he’d need to be nominated in a single day. The result? Mitt Romney quickly called it quits, while Mike Huckabee continued on, but without any real attacks on McCain. The GOP race was over on Feb. 5.

Several candidates who aren’t Mitt Romney are likely to be on the ballot in all 50 states. If a majority of the party agrees on nothing more than Not Mitt Romney, the real Mitt Romey cannot enter April with a majority of delegates. If Romney is able to climb to even 30 percent nationally in the pre-April states — something he hasn’t done in a single national poll — and wins a corresponding percentage of the vote, he would still have only 349 delegates. That means he would need to capture 868 of the 1,217 winner-take-all delegates to capture the nomination through the primary process. His only hope is that the other candidates have dropped out.

If this continues all the way to the end of the primary season in June, Megidal argues, the GOP could go into the Tampa Convention with no single candidate having a majority of the delegates needed to win the nomination on the first ballot. At that point, the bargaining would have to begin. Would Gingrich supporters and Cain supporters unite to stop Romney? Would Gingrich pledge his delegates to Romney in exchange for the Vice-Presidential spot? Could the GOP powers-that-be look on all of this chaos and decide to try to convince some other candidate — Jeb Bush, Mitch Daniels, Chris Christie, take your pick — to come into Tampa as the savior of the party. It would make for great television, no doubt, and great political blogging.

There’s only one problem with Megidal’s analysis, it seems to be based on what has become a common misunderstanding of what the new GOP rules actually mean. As Josh Putnam pointed out back in August, many GOP states are not actually pure winner-take-all in their delegate allocation. Instead, they allocate delegates based on Congressional District, with a bonus number of delegates going to the statewide winner, and at-large delegates that are awarded proportionally. These states will not be required to change their allocation rules even if they hold their primaries before April 1st.  This was the allocation system that was in place in many GOP states in 2008 and it’s what allowed John McCain to lock down the nomination so early even though many of his victories were by relatively small margins on the statewide ballot. There’s no reason to believe that the same thing couldn’t happen in 2012, and even less reason to believe that such a system would allow the nomination process to be dragged out all the way to Tampa, as entertaining as that might be.

One final thought comes to mind from Megidal’s article, and that’s this idea of a GOP “savior” coming in at the last minute. Even if we did end up with a brokered convention next year, the idea a candidate who has not spent the last year on the campaign trail, showing up at debates, touring the “rubber chicken” circuit, and, most importantly, being vetted by the media and by the voters, could just walk into the convention hall and claim the nomination is patently silly. That might have been possible in the era before primaries and massive media coverage of Presidential campaigns, when someone that few people had heard of could end up at the top of a major party ticket, but I don’t think it’s true anymore. A candidate who hasn’t been “out there” isn’t going to be a major party nominee in this day and age, and if it did ever happen it would be a near-guaranteed route to electoral disaster for the party that nominates him or her.

Would a brokered convention be fun? You bet it would be, but the odds we’ll ever see one any time soon are pretty low.

Update: If this entire scenario sounds very familiar to you, it should. James Joyner and Steven Taylor both made note of, and criticized, very similar speculation almost exactly four years ago.