A Different Kind Of Presidential Forum 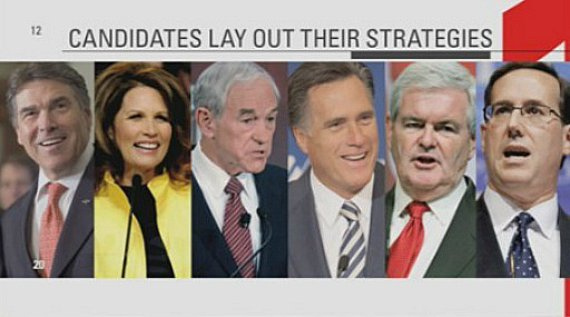 Last night’s Huckabee Presidential Forum on Fox News Channel was different from the debates we’ve seen so far this election cycle. For one thing, for the majority of the broadcast, the candidates did not share the stage for the majority of the debate, instead each candidate (Romney, Paul, Bachmann, Perry, Santorum, and Gingrich were in attendance) spent roughly 10 minutes a piece being questioned by Huckabee along with trio of Republican Attorneys General consisting of Ken Cuccinelli of Virginia, Pam Bondi of Florida, and Scott Pruitt from Oklahoma. The one advantages of the format is that it allowed for more in depth questions and answers than we’ve seen in the eight or nine candidates debate this year where time limits are short and strictly enforced. The other thing that was missing from this debate was any of the back-and-forth attacking that we’ve seen in recent debates, since the candidates didn’t share the stage until the very end of the broadcast there was no opportunity to do so.The final difference is that, this time, the questioning came from a panel of mostly friendly Republican politicians rather than journalists, which definitely changed the tone of the eventing:

The presidential race began Saturday with Herman Cain’s dramatic, theatrical exit from the contest, but it ended with a substantive and subdued discussion of constitutional issues at Mike Huckabee’s presidential forum.

Huckabee hosted the forum on an extended version of his Fox News show, and invited three Republican state attorneys general – Ken Cuccinelli of Virginia, Pam Bondi of Florida and Scott Pruitt of Oklahoma – to question the candidates.

“We heard more about the Constitution more than every other debate combined,” Bondi concluded at the end of the two-hour event.

Gingrich was pressed on some of his more moderate stances – namely, his support for a health care mandate and his appearance in a commercial with House Minority Leader Nancy Pelosi, where the two talked about climate change.

“Sitting on the couch with Nancy Pelosi is the dumbest single thing I’ve done in the last few years — but if you notice, I’ve never favored cap and trade, and in fact I actively testified against it,” Gingrich said. “I was at the U.S. House Energy and Commerce Committee the same day Al Gore was there to testify for it, I testified against it and through American Solutions we fought it in the Senate and played a major role in defeating it.”

Perry, who has turned in a string of embarrassing debate performances, didn’t make any major gaffes, but did stumble slightly when Cuccinelli challenged him on the assertion that an executive order would effectively repeal health care reform.

“The executive order obviously gives you that authority [to repeal the law],” he told Cuccinelli. “But also, as I said earlier, having men and women in those agencies who are going to share your philosophy – I think that’s an important message.”

Cuccinelli shot back: “I just want to be real clear to make sure I understand this: You are taking the position that you can stop the implementation of a law passed by Congress, signed by the president, with an executive order?”

Perry walked his comments back, saying an executive order could stop “parts” of the health care law.

And Romney defended his role in shaping the Massachusetts health care law, saying the final bill was “different” than the one he’d originally proposed but that he was pleased with the imperfect end result.

“Do I like the bill overall? Yes. Am I proud of what we did for our state? Yes,” he said. “But what the president has done is way beyond what we envisioned.”

The New York Times took a slightly different tack, characterizing the forum as a test of the candidates conservatives bona fides:

Six Republican presidential candidates faced tough questioning on their ideological bona fides and the coherence of their proposals during a policy-heavy forum shown on Fox News Channel on Saturday night.

With a gantlet of three conservative state attorneys general peppering the candidates with questions, Newt Gingrich, the former House speaker, was pressed on how conservatives can “trust that a President Gingrich will not advance these sorts of big government approaches” that he had advocated in the past, including his one-time support for a mandate that citizens obtain health insurance. Mr. Gingrich noted that he did so in league with other conservatives and that “every conservative has in fact left that kind of a model.”

Representative Michele Bachmann of Minnesota was asked how she would carry out her call to remove all illegal immigrants living in the United States or pay an estimated cost of $135 billion to do so. “It would be enforcement both at the border but also by the ICE agents,” she said.

And Mitt Romney, the former governor of Massachusetts, was asked pointed questions about his health care overhaul there, and what he would say to President Obama if Mr. Obama were to note during a general election debate its similarities to the federal health care law so hated by Republicans. “Why didn’t you give me a call?” he said, reprising a well-worn line from the campaign trail.

The candidates faced these sharp questions from a roster of attorneys general who have filed legal cases against the 2009 health care law: Pam Bondi of Florida, who brought the original suit the Supreme Court has agreed to hear; Ken Cuccinelli of Virginia, who has been a spokesman for legal action against the law; and Scott Pruitt of Oklahoma. They were gathered by the Fox News host — and 2008 Republican presidential candidate — Mike Huckabee, the former governor of Arkansas.

It was one of the more substantive television events in the Republican contest so far, set up as a forum where candidates faced the panel solo and did not directly interact, leaving the intraparty politics largely out of it, with the exception of Gov. Rick Perry of Texas, who urged the television audience to give him “a second look.” That was a tacit acknowledgment of his drop in polls and, perhaps, a new opportunity after Herman Cain’s decision earlier Saturday to suspend his campaign.

The attorneys general, new to presidential debate-style politics, were hardly cowed by their appearance on national television. Nor did they let their own general ideological agreement with the candidates get in the way of tough questions about how they would carry out their proposals. But the attorneys general seemed to give Mr. Gingrich the hardest time.

The substance of the debate was about what you’d expect, and I’m not sure you can say that anyone “won” this thing, but that’s not really the point. In a lot of ways, this may have been the best debate/forum/whatever you want to call it of the election cycle. Not so much because of what the candidates said, but because of the forum itself. Instead of expecting candidates to come up with 1 or 2 minute answers to questions, 30 second responses, and waiting to see which candidate commits a gaffe and which one gets in the best zinger, the intent was clearly to actually concentrate on substance, and it showed. Initially, for example, I wasn’t optimistic about the idea of three Attorneys General being the people asking questions, but it ended up turning out fairly well. Instead of focusing on questions from journalists guaranteed to grab headlines and “make news,” we got some more substance, which is something that’s sadly lacking in modern politics as a whole.

The one-on-one questioning format is one that I’d hope would be adopted by other debate organizers in the future. It would be difficult early in the process, of course, because a two hour debate consisting of 8 or 9 candidates would mean an average of 13 to 15 minutes per candidate, and that’s not including commercial breaks. Last night, each candidate actually ended up being questioned for about 11 minutes each, not a lot of time, but certainly time enough to have a more intelligent discussion of issues than the traditional Presidential primary debate. Even with the questions being asked by a panel of journalists, I would think that voters would get a lot more out of one of these forums that out of a “debate” where half the questions end up being asked by people on YouTube. Take a look at what Mike Huckabee (yes Mike Huckabee, I know) did last night, media and think about how you can copy it.

Herman Cain was missing last night, for obvious reasons, although Cain had apparently declined the invitation before he made his announcement yesterday, perhaps because he knew what he was going to do. The frequent debate participant that was missing, though, was Jon Huntsman. Apparently, at least according to Mike Huckabee, Huntsman was invited but had declined to attend. I think this was a mistake on his part. Granted, Jon Huntsman is unlikely to find many friends right now on Fox News Channel, but this was exactly the kind of forum where I suspect he would have come across very, very well. Besides, it would have been free television time and when you’re far behind in the polls and the fundraising, you should accept as much of that as you can. Perhaps Huntsman had some kind of conflict last night in New Hampshire, but if that’s the case then I think he made the wrong choice. Huckabee’s show is the highest rated weekend show on cable, and while that’s not a huge audience, it’s larger than any you can gather in someone’s living room in Manchester.

Jazz Shaw has an in depth summary of the substance of the forum that I’d recommend to your attention, or if you’re so inclined, you can watch the entire thing for yourself.