A Traffic Jam At The Top In Iowa

Heading into the last day of campaigning, the race in Iowa is too close to call. 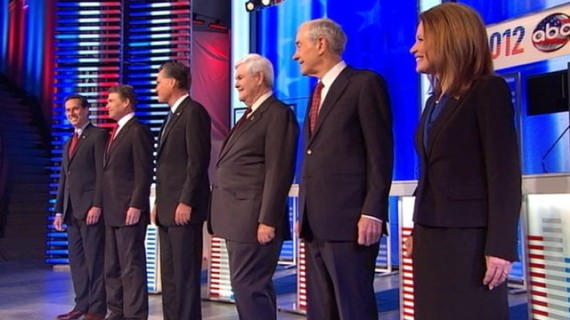 Heading into the final day of campaigning, there’s something of a traffic jam at the top of field in the Iowa Republican Caucuses. If the polling is to believed, then Ron Paul, Mitt Romney, and Rick Santorum each have a shot at if not winning the Caucuses outright, then at least pulling in a respectable enough showing to claim a moral victory. The latest, and last, piece of the puzzle came last night in the form of the final Public Policy Polling survey, which showed Ron Paul maintaining a slight, but statistically insignificant, lead:

The Republican caucus in Iowa is headed for a photo finish, with the three leading contenders all within two points of each other.  Ron Paul is at 20%, Mitt Romney at 19%, and Rick Santorum at 18%. Rounding out the field are Newt Gingrich at 14%, Rick Perry at 10%, Michele Bachmann at 8%, Jon Huntsman at 4%, and Buddy Roemer at 2%.

The momentum in the race is completely on Santorum’s side. He’s moved up 8 points since a PPP poll earlier in the week, while no one else has seen more than a one point gain in their support. Among voters who say they decided who to vote for in the last seven days he leads Romney 29-17 with Paul and Gingrich both at 13.

Santorum’s net favorability of 60/30 makes him easily the most popular candidate in the field. No one else’s favorability exceeds 52%.  He may also have more room to grow in the final 48 hours of the campaign than the other front runners: 14% of voters say he’s their second choice to 11% for Romney and only 8% for Paul. Santorum’s taken the lead with two key groups of Republican voters: with Tea Partiers he’s at 23% to 18% for Gingrich, 16% for Paul, 15% for Bachmann, and only 12% for Romney.  And with Evangelicals he’s at 24% to 16% for Gingrich, and 15% for Paul and Romney.

Here’s what the essential final (as far as I know, there are no more major polls of Iowa left to be released before tomorrow night) RCP polling average looks like:

And here’s the chart:

That light-brown line that’s essentially moving straight up right now is Santorum, and there’s no indication of how high it could possible go. Conventional wisdom, of course, would tell you that this last minute Santorum surge, which started just about a week ago according to the polls,  means that the former Pennsylvania Senator stands to do even better on Tuesday night than he’s polling right now. That may well be true, and if this were a primary rather than a caucus then that’s probably exactly what will happen. With a caucus, and recent polling showing that as many as 40% of likely caucus voters could change their mind before caucus night, that’s not necessarily the case. For one thing, it’s fairly apparent that Santorum doesn’t have the campaign organization that Romney and Paul do. Unlike them, he’s not likely to have phalanx’s of volunteers out tomorrow offering to give people rides to caucus sites. Heck, Santorum is still touring the state in the same pickup truck he was using when he started this campaign. So, there may be a ceiling to Santorum’s support that the polls aren’t detecting.

Moreover, it seems fairly apparent that Santorum is just the latest in a long line of not-Romney’s to rise to the top of the polls. There’s little reason to believe that he is going to last any longer than the others have once the media spotlight is turned on him. There’s plenty out there. Santorum’s record in Congress was far from conservative on fiscal issues, for example, and his claims of electability would seem to crash and burn once people start remembering how badly he lost his re-election bid in 2006. His claims to foreign policy expertise basically boil down to having given a bunch of speeches while a Senator. And his appeal beyond the social conservative/evangelical world seems limited given his extreme rhetoric on issues like abortion and same-sex marriage and the role he played in attempting to defy the rulings of several State and Federal Courts during the whole Terry Schaivo fiasco. Leaving aside his record, there”s no sign that Santorum has much of an organization outside the Hawkeye State so it’s hard to see how he will be able to quickly explot a victory there.

Even in Iowa, where the search for the not-Romney has gone on the longest, the Republican selectorate seems to be recognizing that Romney is the one that’s going to make it all the way through this in the end.

At the Lutheran Church of Hope on a nippy Sunday morning, two days before this state launches the Republican nominating process, worshippers seemed more excited about the hot breakfast being served than the longtime front-runner, Mitt Romney. Have you tried the eggs? The bacon?

When pressed, their first choices ranged from Rick Santorum to Newt Gingrich to Rick Perry, who mingled with them after the service.

But as muted as the enthusiasm was for Romney, there was also a growing sense that he’s the strongest candidate to oppose President Obama in the 2012 general election. The latest Des Moines Register poll shows Romney with a commanding 48 percent on the electability question.

“I think Romney will probably win the nomination because there’s no true leader,” said 64-year-old retiree Kathy Davis, holding a cup of coffee in one hand and her 7-year-old granddaughter’s hand in the other.  “Whoever the nominee is, we will vote for. But he’s going to have to put in a real effort after Iowa.”

Many of the social conservatives who dominate GOP contests here are uncomfortable with the Mormon ex-governor of Massachusetts, who once supported abortion and gay rights. In contrast to the full-court press he lavished on Iowa four years ago, only to come in second, Romney kept his distance for months and didn’t contest the state party’s famed straw poll in August.

But as his more conservative rivals fell flat, one after the other, Romney ratcheted up his number of appearances and his advertising.

“He had the perfect storm in this state, and then he was ready to take advantage of it,” said Steve Grubbs, a former chairman of the Republican Party of Iowa and a caucus veteran. “He put together a professional team and managed it well. He banked his money so he can run 60-second ads now. He chose his battles wisely.”

And this is from voters who you would expect to caucus for Santorum, Perry, or Bachmann. If this reluctant acceptance of Romney’s inevitability is widespread going into tomorrow, then you could see people who are currently telling pollsters that they’re supporting the candidate that their heart tells them to go for end up supporting the guy who their head says has the best chance of winning not only the nomination but the General Election. Of course, that isn’t always a concern you see from Iowa Republicans given the history of the caucuses, but anything is possible at this point.

Update: I guess I was incorrect, two more Iowa polls were released this morning but there’s not much difference from what we’ve already seen:

A new InsiderAdvantage poll in Iowa shows Mitt Romney leading the GOP field with 23%, followed by Ron Paul at 22%, Rick Santorum at 18%, Newt Gingrich at 16%, Rick Perry at 10%, Michele Bachmann at 6% and Jon Huntsman at 2%.

A new American Research Group poll shows Romney leading with 22%, followed by Paul at 17%, Santorum at 16% and Gingrich at 15%.

Same jumble as the other polls, effectively