The eighty year old mystery regarding the fate of famed aviator Amelia Earhart may have taken a step toward being solved if the results of a new forensic study are correct. 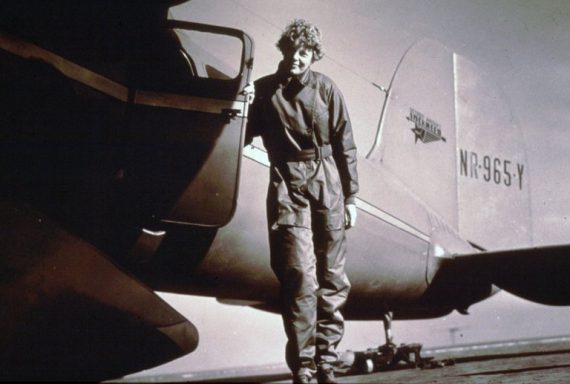 A group of scientists are saying that remains recovered from a remote island in the Pacific Ocean are those of famed aviator Amelia Earhart, who disappeared without explanation during an around the world flight:

Amelia Earhart’s story is revolutionary: She was the first woman to fly alone across the Atlantic Ocean, and might have been the first to fly around the world had her plane not vanished over the Pacific Ocean in 1937.

After decades of mystery surrounding her disappearance, her story might come to a close.

A new scientific study claims that bones found in 1940 on the Pacific Island of Nikumaroro belong to Earhart, despite a forensic analysis of the remains conducted in 1941 that linked the bones to a man. The bones, revisited in the study “Amelia Earhart and the Nikumaroro Bones” by University of Tennessee professor Richard L. Jantz, were discarded. For decades they have remained an enigma, as some have speculated that Earhart died a castaway on the island after her plane crashed.

The bones were uncovered by a British expedition exploring the island for settlement after they came upon a human skull, according to the study. The expedition’s officer ordered a more thorough search of the area, which resulted in the discovery of several other bones and part of what appeared to be a woman’s shoe. Other items found included a box made to hold a Brandis Navy Surveying Sextant that had been manufactured around 1918 and a bottle of Benedictine, an herbal liqueur.

“There was suspicion at the time that the bones could be the remains of Amelia Earhart,” Jantz wrote in the study.4

When the 13 bones were shipped to Fiji and studied by D.W. Hoodless of the Central Medical School the following year, Jantz argues that it is likely that forensic osteology — the study of bones — was still in its early stages, which therefore affected his assessment of which sex the remains belonged to. Jantz, in attempting to compare the lost bones with Earhart’s bones, co-developed a computer program that estimated sex and ancestry using skeletal measurements. The program, Fordisc, is commonly used by forensic anthropologists across the globe.

Jantz compared the lengths of the bones to Earhart’s measurements, using her height, weight, body build, limb lengths and proportions, based on photographs and information found on her pilot’s and driver’s licenses. His findings revealed that Earhart’s bones were “more similar to the Nikumaroro bones than 99 [percent] of individuals in a large reference sample

“In the case of the Nikumaroro bones, the only documented person to whom they may belong is Amelia Earhart,” Jantz wrote in the study.

Earhart’s disappearance has long captivated the public, and theories involving her landing on Nikumaroro have emerged in recent years. Retired journalist Mike Campbell, who wrote “Amelia Earhart: The Truth at Last,” has maintained with others that Earhart and her navigator, Fred Noonan, were captured in the Marshall Islands by the Japanese, who thought they were American spies. He believes they were tortured and died in custody.

But Ric Gillespie, director of the International Group for Historic Aircraft Recovery (TIGHAR) spoke to The Washington Post’s Cleve R. Wootson Jr. in 2016 about how he also believes the bones found on Nikumaroro belong to Earhart.

In 1998, the group took Hoodless’s measurements of the Nikumaroro bones and analyzed them through a robust anthropological database. They determined the bones belonged to a taller-than-average woman of European descent — perhaps Earhart, who at 5-feet-7 to 5-feet-8 was several inches taller than the average woman.

As The New York Times noted in a piece published last summer near the 80th anniversary of her disappearance, the fate of Amelia Earhart has been a mystery that has captivated historians and explorers for decades, and a variety of theories have been put forward for what happened to her during her journey across the Pacific. These have ranged from reports that Earhart and her navigator Fred Noonan were seen alive by natives years after her apparent disappearance to a report in 2016 linked to a History Channel special that claimed that Earhart and Noonan had been captured and taken into custody by the Japanese. There have also been claims over the years that at least part of the reason for Earhart’s route over the Pacific was to serve as something of a spy for the American military in mapping out Japanese positions on remote Pacific islands and atolls, although this has never been officially confirmed.

This isn’t the first time that there have been reports of a breakthrough in finding out what happened to Earhart and Noonan, of course. In 2012. it was reported that a group dedicated to the recovery of historically significant missing aircraft had found evidence linking Earhart and her plane to the same island of Nikumaroro mentioned in this report. However, those reports remained unconfirmed after an expedition to the island failed to find anything of significance connecting the site to Earhart, Noonan, or the plane they were traveling in. A year later the same group reported sonar evidence indicating an “anomaly” that could have been Earhart’s plane in the waters off of Nikumaroro, but those reports again proved to be somewhat premature and inconclusive. This forensic study would appear to bolster the validity of the speculation that Earhart and Noonan went down somewhere near Nikumaroro and that they may have even survived on the island for some time after the plane went down. It’s not conclusive, though, so once again we’re somewhat back at the same stage we’ve been since Earhart disappeared nearly 81 years ago.  At the same time, it’s worth noting that there is other evidence that disputes the arguments linking Earhart to Nikumaroro in any respect. Indeed, the most likely explanation is that Earhart encountered mechanical difficulties somewhere over the Pacific and that the evidence of what happened to her is lies far below the waters of the Pacific at depths that make finding anything conclusive unlikely at best.