The public is growing tired of America's Longest War. 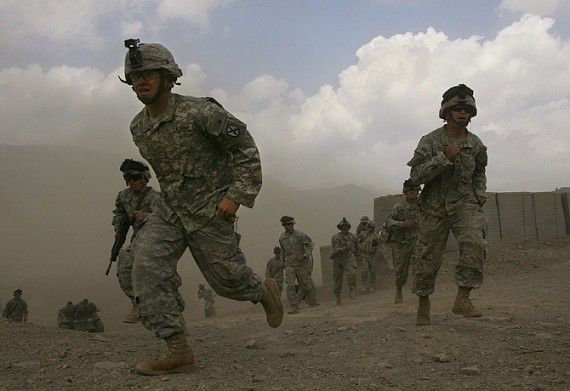 The Christian Science Monitor takes a look at the polls and finds that the American public is growing tired of a war in Afghanistan that has no real end in sight:

Until recently, the nine-year conflict in Afghanistan had become “the forgotten war” for many Americans – a complaint increasingly heard among US troops there.

But this week’s sacking of Gen. Stanley McChrystal as US commander puts Afghanistan – and especially how the fight against the Taliban is going – squarely back into public thought and concern.

Most Americans agree with Obama that McChrystal had to go, polls show. But they’re far less supportive of the conflict itself, weary of what’s become the longest war in US history.

A recent Rasmussen Reports telephone survey of likely voters finds that just 41 percent “now believe it is possible for the United States to win the nearly nine-year-old war in Afghanistan.” More to the point, a plurality of 48 percent now say ending the war in Afghanistan is a more important goal than winning it.

Meanwhile, 53 percent of those polled by Newsweek disapprove of how Obama is managing the war – a sharp reversal since February when 55 percent supported Obama on Afghanistan and just 27 percent did not. (Put another way, the percentage of Americans who disapprove of Obama’s Afghan policy has nearly doubled in four months.)

The same Newsweek poll finds that “46 percent of respondents think America is losing the war in Afghanistan (26 percent say the military is winning). A similar plurality think the US is losing the broader war on terrorism (43 percent vs. 29 percent)…”

Part of this has to do with the nature of a counterinsurgency (COIN) effort – a phrase and acronym which has been around at least since the early days of Vietnam. Even when it works, counterinsurgency can take years. And the two most recent major examples – France in Algeria and the United States in Vietnam – hardly worked. Hearts and minds must be won, not only in the war zone, but at home as well.

Ironically, though, Afghanistan seems to be less a part of the American daily consciousness than Vietnam was even though the media is far more prevalent today than it was in the 1960s. If we were seeing live reports from the battlefield every night to back up those casualty reports we see in the newspaper every couple of days, I would imagine that American opposition to the war would be even stronger, and louder.

None of this should be surprising, of course, if Vietnam taught us anything, it taught us that a military campaign based on counter-insurgency and long-term commitments is difficult, if not impossible, to sell to the American public. Party, this may be because civilians are still used to thinking of wars in terms of set-piece battles, campaigns, and the capturing of enemy soldiers. A war strategy that has as it’s base the winning of the hearts and minds of the population is completely alien compared to something like, say, the Battle of the Bulge, or even the First Persian Gulf War As I noted a few days ago, even the soldiers on the ground aren’t happy with the rules that COIN imposes on them, so it’s not really all that surprising that the general public wouldn’t be supportive either.

Finally, there’s the simple fact that America simply doesn’t have a history of long wars. With the exception of Vietnam, and of course Afghanistan, most of America’s wars have lasted no more than four to five years. The idea of the “permanent campaign” or the endless war is simply not something that American life is either familiar with.