On his trip to Hanoi, President announced the latest sign that the Vietnam War is finally something both nations have manged to put behind them. 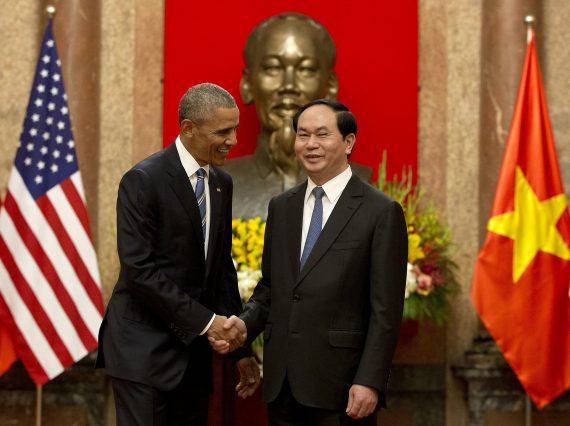 In an historic move that could arose some controversy back home, President Obama announced that he was lifting the decades old arms embargo against Vietnam:

HANOI, Vietnam — The United States is rescinding a decades-old ban on sales of lethal military equipment to Vietnam, President Obama announced at a news conference in Hanoi on Monday, ending one of the last legal vestiges of the Vietnam War.

The United States has long made lifting the embargo contingent on Vietnam’s improving its human rights record, and recently administration officials had hinted that the ban could be removed partly in response to China’s buildup in the South China Sea.

But Mr. Obama portrayed the decision as part of the long process of normalizing relations between the two countries after the Vietnam War.

“The decision to lift the ban was not based on China or any other considerations,” he said, with the Vietnamese president, Tran Dai Quang, standing stiffly by his side. “It was based on our desire to complete what has been a lengthy process of moving toward normalization with Vietnam.”

Mr. Obama insisted that the move should not be interpreted as carte blanche for weapons sales to Vietnam and that the United States would review future arms sales to “examine what’s appropriate and what’s not,” as it does with any country.

“We’re going to continue to engage in the case-by-case evaluation of these sales,” Mr. Obama said. “But what we do not have is a ban that is based on an ideological division between our two sides.”

As for human rights, he said, “this is an area where we still have differences.”

Human rights advocates, who had asked Mr. Obama to hold off on lifting the ban until Vietnam had released some prominent political prisoners and promised to stop the police beatings of protesters, condemned the decision.

“The consistent position and viewpoint of the Vietnamese government is to protect and promote human rights,” he said, adding: “Those achievements have been highly recognized and appreciated by the international community.”

American officials have portrayed lifting the embargo as part of a strategy to help Vietnam defend itself against an increasing threat from China in the South China Sea. Analysts have speculated that in return, Vietnam would grant the United States access to the deepwater port at Cam Ranh Bay.

While there were no statements about such a deal on Monday, Mr. Obama did announce new commercial deals worth more than $16 billion, including one in which Boeing will sell 100 aircraft and Pratt & Whitney will sell 135 advanced aircraft engines to VietJet, a privately owned low-cost airline.

Mr. Obama’s trip to Vietnam is part of an effort by this Southeast Asian nation to recalibrate its relationship with China, its giant neighbor in the north. China remains Vietnam’s largest trading partner and an ideological ally, but the two countries have sparred over Beijing’s claims of waters off Vietnam’s coast in the South China Sea. The United States has sought to challenge those maritime claims, as well as others contested by Japan, the Philippines, South Korea and Taiwan — all American allies.

Since 2014, when China placed an oil rig in waters near the Paracel Islands, which Vietnam claims, Hanoi has repeatedly asked Washington for the freedom to buy American lethal weapons. The United States partly relaxed the ban two years ago, allowing the purchase of nonlethal equipment for maritime defense.

China’s reaction to the decision on Monday was subdued.

“The arms embargo is a product of the Cold War and should never have existed,” Hua Chunying, a spokeswoman for the Foreign Ministry, said during a regular news briefing in Beijing. “We welcome normal relations between Vietnam and the United States.”

But beneath the polite response are deep concerns in Beijing about the intentions of Vietnam. And Vietnam, while seeking to defend itself from China, is unlikely to completely sever itself from China’s orbit.

In a sign of the complexities of the relationship, the Chinese ambassador to Vietnam, Hong Xiaoyong, met last Thursday with Vietnam’s defense minister, Ngo Xuan Lich, in Hanoi. Both sides pledged to strengthen military ties, said Xinhua, the Chinese state-run news agency.

The lifting of the arms embargo comes at a particularly sensitive time for China. The government is running a high-pitched diplomatic campaign criticizing a pending arbitration ruling on the South China Sea. China argues the United Nations tribunal has no right to make a ruling in a case that the Philippines has brought against China.

Vietnam has loudly backed the tribunal and the right of the Philippines to take its case to the panel.

Mr. Obama also announced on Monday that the two sides had formalized an agreement to allow the opening of Fulbright University Vietnam in Ho Chi Minh City, the first independent university in Vietnam in which the government will have no role in creating the curriculum or teaching students.

The university’s chairman, Bob Kerrey, a former senator of Nebraska, said the school may start teaching undergraduates in the fall of 2017.

Mr. Obama also said that for the first time, Peace Corps volunteers will be posted to Vietnam and focus on teaching English here.

For those old enough to remember the end of the Vietnam War and the resentments and bad memories Americans that followed in the years after, this is certainly a tremendous change from the direction things appeared to be going forty years ago. At that point just one year after a war that ended with Americans and Vietnamese clinging to helicopter on the roof of the U.S. Embassy in the city that used to be known as Saigon, the memories of America’s most contentious and painful foreign military intervention until the Iraq War were just beginning to coalesce and it would be decades before those wounds would heel. As late as the Presidential elections of 1992, 2000, and 2004, the question of whether or not a candidate had actively sought to evade the Vietnam Era draft via student deferments or other means became a big issue at some point during a campaign. And, of course, arguably up until the Persian Gulf War in the early 1990s, the nation as a whole and the military in particular was dealing with the so-called “Vietnam War syndrome” and the consequences of a war that the U.S. lost. Internationally, the fall of South Vietnam put the newly united Vietnam firmly in the Soviet orbit but, even then, there were persistent conflicts with Vietnam’s neighbor China, including a brief border conflict in 1979 that has been given by some the rather presumptuous title of the Third Indochina War.

After the collapse of the Soviet Union, things began to change rapidly both for Vietnam and for U.S.-Vietnamese relations. In 1994. the trade embargo between the U.S. and Vietnam was formally lifted, and diplomatic relations were restored in 1995. In 2000, President Clinton became the first President to visit Vietnam since the war, and the George W. Bush Presidency saw the further thawing of relations between the two nations that included the integration of Vietnam into the world’s economic system notwithstanding the fact that it was still formally at least a Communist state. During the Obama years, the story of Vietnam was been one in which the nation has seemingly been pushed toward closer relations with neighbors just as Japan and South Korea as well as its former foe the United States thanks to increased Chinese aggressiveness in the South China Sea centered around territorial claims. The situation has gotten so serious in the minds of some Vietnamese that there actually seems to be some hope that the American military might return to its former base at Cam Ranh Bay. While that seems unlikely, President Obama’s visit, the third by a U.S. President since 2000, and the lifting of the embargo shows that history can change relatively quickly and that former enemies can become, if not allies, at the very least nations that we have more in common than just having fought a war against.

It’s Time To End The U.S. Embargo Of Cuba 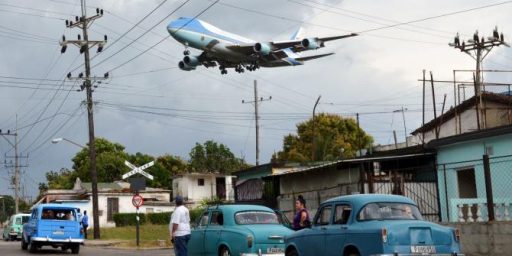 As Obama Arrives In Havana, Poll Finds Most Americans Support His Opening To Cuba