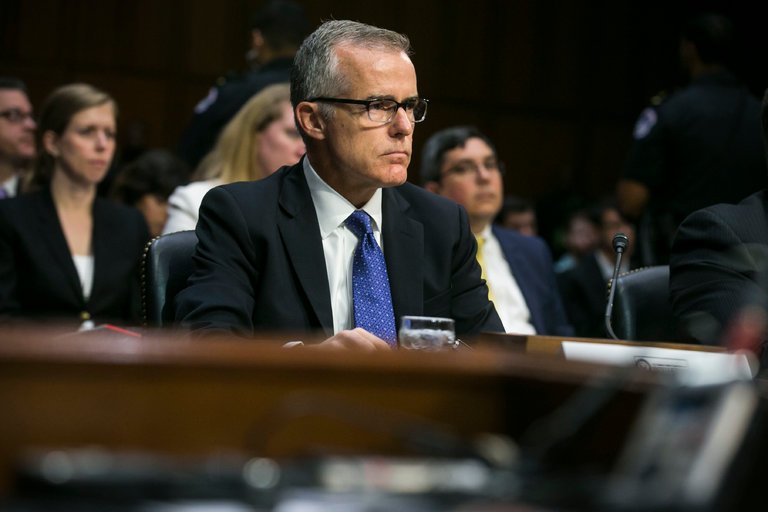 WaPo (“Andrew McCabe, Trump’s foil at the FBI, is fired hours before he could retire“):

Attorney General Jeff Sessions late Friday night fired former FBI deputy director Andrew Mc­Cabe, a little more than 24 hours before McCabe was set to retire — a move that McCabe alleged was an attempt to slander him and undermine the ongoing special counsel investigation into the Trump campaign.

Sessions announced the decision in a statement just before 10 p.m., noting that both the Justice Department inspector general and the FBI office that handles discipline had found “that Mr. McCabe had made an unauthorized disclosure to the news media and lacked candor — including under oath — on multiple occasions.”

He said based on those findings and the recommendation of the department’s senior career official, “I have terminated the employment of Andrew McCabe effective immediately.”

The move will likely cost Mc­Cabe a significant portion of his retirement benefits, though it is possible he could bring a legal challenge.

Trump tweeted early Saturday morning, “Andrew McCabe FIRED, a great day for the hard working men and women of the FBI – A great day for Democracy. Sanctimonious James Comey was his boss and made McCabe look like a choirboy. He knew all about the lies and corruption going on at the highest levels of the FBI!”

An email notifying McCabe of the move was sent to his work account and his lawyers just minutes before Sessions’s statement was made public, though McCabe learned of the firing from press accounts, his spokeswoman said. McCabe has been fighting vigorously to keep his job, and on Thursday, he spent nearly four hours inside the Justice Department pleading his case.

Michael R. Bromwich, Mc­Cabe’s attorney, said that he had “never before seen the type of rush to judgment — and rush to summary punishment — that we have witnessed in this case.” He cited in particular President Trump’s attacks on McCabe on Twitter and the White House press secretary’s comments about him on Thursday — which he said were “quite clearly designed to put inappropriate pressure on the Attorney General to act accordingly.”

“This intervention by the White House in the DOJ disciplinary process is unprecedented, deeply unfair, and dangerous,” Bromwich said.

McCabe has become a lightning rod in the political battles over the FBI’s most high-profile cases, including the Russia investigation and the probe of Hillary Clinton’s email practices. He has been a frequent target of criticism from Trump.

His firing — which was recommended by the FBI office that handles discipline — stems from a Justice Department inspector general investigation that found McCabe authorized the disclosure of sensitive information to the media about a Clinton-related case, then misled investigators about his actions in the matter, people familiar with the matter have said. He stepped down earlier this year from the No. 2 job in the bureau after FBI Director Christopher A. Wray was briefed on the inspector general’s findings, though he technically was still an employee.

Lack of candor is a fireable offense at the F.B.I., but Mr. McCabe’s last-minute dismissal was carried out against a highly politicized backdrop.

Mr. McCabe was among the first at the F.B.I. to scrutinize possible Trump campaign ties to Russia. And he is a potential witness to the question of whether Mr. Trump tried to obstruct justice. Mr. Trump has taunted Mr. McCabe both publicly and privately, and Republican allies have cast him as the center of a “deep state” effort to undermine the Trump presidency.

As a witness, Mr. McCabe would be in a position to corroborate the testimony of the former F.B.I. director, James B. Comey, who kept contemporaneous notes on his conversations with Mr. Trump. Mr. Comey said Mr. Trump prodded him to publicly exonerate the president on the question of Russian collusion and encouraged him to shut down an investigation into his national security adviser.

Mr. McCabe was the F.B.I.’s second in command during one of the most tumultuous periods in the bureau’s history. He oversaw investigations into both the Trump campaign and Hillary Clinton’s use of a private email server — and he dealt with the fallout from both. He became the acting F.B.I. director after the sudden firing of his boss, Mr. Comey, and he publicly contradicted the White House on national television over whether Mr. Comey had lost the support of rank-and-file F.B.I. agents.

Since then, Mr. Trump has repeatedly singled him out for public attack, suggesting that he helped protect Mrs. Clinton from prosecution during the 2016 presidential campaign. As evidence, he pointed to the fact that Mr. McCabe’s wife, Jill, ran as a Democrat for a State Senate seat in Virginia and received hundreds of thousands of dollars from a political committee run by Terry McAuliffe, a longtime ally of the Clintons.

As recently as Thursday, even as the White House said it left Mr. McCabe’s fate in Mr. Sessions’s hands, officials there left little doubt where the president stood. “It is well documented that he has had some very troubling behavior and by most accounts a bad actor,” said the White House press secretary, Sarah Huckabee Sanders.

Mr. McCabe’s lawyer called those comments “vile and defamatory” and said they were intended to put pressure on the Justice Department. “This intervention by the White House in the D.O.J. disciplinary process is unprecedented, deeply unfair and dangerous,” said the lawyer, Michael R. Bromwich.

I have been an FBI Special Agent for over 21 years. I spent half of that time investigating Russian Organized Crime as a street agent and Supervisor in New York City. I have spent the second half of my career focusing on national security issues and protecting this country from terrorism. I served in some of the most challenging, demanding investigative and leadership roles in the FBI. And I was privileged to serve as Deputy Director during a particularly tough time.

For the last year and a half, my family and I have been the targets of an unrelenting assault on our reputation and my service to this country. Articles too numerous to count have leveled every sort of false, defamatory and degrading allegation against us. The President’s tweets have amplified and exacerbated it all. He called for my firing. He called for me to be stripped of my pension after more than 20 years of service. And all along we have said nothing, never wanting to distract from the mission of the FBI by addressing the lies told and repeated about us.

The investigation by the Justice Department’s Office of Inspector General (OIG) has to be understood in the context of the attacks on my credibility. The investigation flows from my attempt to explain the FBI’s involvement and my supervision of investigations involving Hillary Clinton. I was being portrayed in the media over and over as a political partisan, accused of closing down investigations under political pressure. The FBI was portrayed as caving under that pressure, and making decisions for political rather than law enforcement purposes. Nothing was further from the truth. In fact, this entire investigation stems from my efforts, fully authorized under FBI rules, to set the record straight on behalf of the Bureau, and to make clear that we were continuing an investigation that people in DOJ opposed.

The OIG investigation has focused on information I chose to share with a reporter through my public affairs officer and a legal counselor. As Deputy Director, I was one of only a few people who had the authority to do that. It was not a secret, it took place over several days, and others, including the Director, were aware of the interaction with the reporter. It was the type of exchange with the media that the Deputy Director oversees several times per week. In fact, it was the same type of work that I continued to do under Director Wray, at his request. The investigation subsequently focused on who I talked to, when I talked to them, and so forth. During these inquiries, I answered questions truthfully and as accurately as I could amidst the chaos that surrounded me. And when I thought my answers were misunderstood, I contacted investigators to correct them.

But looking at that in isolation completely misses the big picture. The big picture is a tale of what can happen when law enforcement is politicized, public servants are attacked, and people who are supposed to cherish and protect our institutions become instruments for damaging those institutions and people.

Here is the reality: I am being singled out and treated this way because of the role I played, the actions I took, and the events I witnessed in the aftermath of the firing of James Comey. The release of this report was accelerated only after my testimony to the House Intelligence Committee revealed that I would corroborate former Director Comey’s accounts of his discussions with the President. The OIG’s focus on me and this report became a part of an unprecedented effort by the Administration, driven by the President himself, to remove me from my position, destroy my reputation, and possibly strip me of a pension that I worked 21 years to earn. The accelerated release of the report, and the punitive actions taken in response, make sense only when viewed through this lens. Thursday’s comments from the White House are just the latest example of this.

This attack on my credibility is one part of a larger effort not just to slander me personally, but to taint the FBI, law enforcement, and intelligence professionals more generally. It is part of this Administration’s ongoing war on the FBI and the efforts of the Special Counsel investigation, which continue to this day. Their persistence in this campaign only highlights the importance of the Special Counsel’s work.

I have always prided myself on serving my country with distinction and integrity, and I always encouraged those around me to do the same. Just ask them. To have my career end in this way, and to be accused of lacking candor when at worst I was distracted in the midst of chaotic events, is incredibly disappointing and unfair. But it will not erase the important work I was privileged to be a part of, the results of which will in the end be revealed for the country to see.

I have unfailing faith in the men and women of the FBI and I am confident that their efforts to seek justice will not be deterred.

Firing McCabe in this manner, smearing his reputation and depriving him of much of his pension, is shameful. The fact that this all happened after 10pm on a Friday night is a rather clear signal that the decision was clearly rushed to ensure he couldn’t simply retire with dignity. The fact that the President continuously interfered in the matter and was up late at night gloating about the result on Twitter makes it rather obviously a case of abuse of power.