For the fourth time in 30 years, an American President spoke at Normandy to honor a day of sacrifice and triumph. 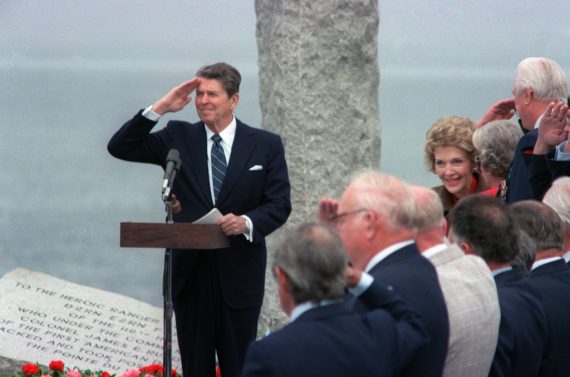 With President Obama speaking today at the 70th Anniversary of the D-Day Invasion, it’s worth noting how the Presidential pilgrimage to Normandy became a tradition:

The drama and impact of June 6, 1944 — immortalized in books and movies such asThe Longest Day and Saving Private Ryan — make the Normandy coast an irresistible lure for U.S. commanders in chief.

“They can wrap themselves in the glory of Normandy and the aura of remembrance,” said historian Rick Atkinson, who wrote about D-Day in The Guns At Last Light, the third volume of his World War II trilogy.

That hasn’t always been the case. For some time after 1944, D-Day did not have the resonance it has had in recent decades, in part because many veterans were reluctant to talk about their brutal experiences.

Even President Dwight Eisenhower, who organized the D-Day invasion eight years before his election to the White House, issued only a short written statement on the 10th anniversary of the battle. (The statement’s last line: “The courage, devotion and faith which brought us through the perils of war will inevitably bring us success in our unremitting search for peace, security and freedom.”)

An American president didn’t visit Normandy until Jimmy Carter made the trip in January 1978. Carter pledged to defend Western Europe during the Cold War: “We are determined, with our noble allies here, that Europe’s freedom will never again be endangered.”

Historian Douglas Brinkley, who wrote a book about Reagan’s speech at Pointe du Hoc, said, “We really hadn’t had that moment of appreciation for the World War II veterans” before that commemoration in 1984.

He noted that Reagan linked the sacrifices of World War II to efforts to win the Cold War. The president said “some liberated countries were lost” at the end of World War II.

Reagan also cited the sacrifices of the Russian people during World War II and provided “a kind of foreshadowing” of his dealings with Soviet leader Mikhail Gorbachev, historian Donald Miller said. (Reagan said the United States was “prepared to reach out again in the spirit of reconciliation.”)

Ten years after Reagan’s Pointe du Hoc speech — a time in which the Soviet Union fell and its satellite nations became free — President Bill Clinton visited Normandy for the 50th anniversary of D-Day. One of his topics: the shape of the post-Cold War world.

Clinton asked, “How will we build upon the sacrifice of D-Day’s heroes?” His answer: “Avoiding today’s problems would be our own generation’s appeasements.”

President George W. Bush’s first visit to Normandy came on Memorial Day of 2002, less than a year after the attacks of 9/11. Bush linked the sacrifices of World War II to those of the then-nascent war on terrorism.

“Words can only go so far in capturing the grief and sense of loss for the families of those who died in all our wars,” Bush said. “For some military families in America and in Europe, the grief is recent, with the losses we have suffered in Afghanistan.”

Bush returned to Normandy for the 60th anniversary of D-Day on June 6, 2004 (the day after Reagan’s death). In that speech, Bush said, “America honors all the liberators who fought here in the noblest of causes.”

Before Reagan, no other President had gone to Normady for the anniversary of the invasion. In 1954, President Eisenhower spent the day at Camp David and merely issued a Presidential Statement about the anniversary. According to reports, Eisenhower felt that to do anything more, especially to travel to Europe, would have been overly boastful on his part. It’s also worth noting that the state of East-West relations at the time were such that ti would have likely been awkward to invite a Soviet representative to the affair, and failure to do so would have been seen by the Soviets as a slight. In 1964, Lyndon Johnson had apparently decided not to take any big international trip during the year after President Kennedy’s assassination, and indeed I can’t find any record of any such trips during that year. The next anniversary of significance would have been in 1969 when Richard Nixon was just starting out in the White House. Given that no previous precedent had been established, though, and the fact that the U.S. was in the middle of the Vietnam War, it’s not surprising that there was no trip. By 1974, President Nixon was mired in Watergate and just over two months away from resigning from office. A trip such as this would have been out of the question.

So, it fell to Ronald Reagan in 1984 to become the first President to mark the anniversary in Normandy itself, and the speech he gave is one that will never be forgotten.

Today, President Obama’s own speech reached back to the sacrifices of a generation that will likely not be with us the next time we mark a significant anniversary of this great achievement:

President Barack Obama paid tribute to American and Allied forces who fought and died in the D-Day landings 70 years ago Friday, describing the shores of Normandy as “democracy’s beachhead.”

The president addressed a crowd of almost 15,000 gathered under calm blue skies at Colleville-sur-Mer, a cemetery close to Omaha beach, where some 2,500 U.S. servicemen died in the invasion.

There are 9,387 U.S. personnel buried at the cemetery, which played host to one of the numerous services across northern France commemorating the 70th anniversary of the bloody amphibious assault that turned the tide of World War II on June 6, 1944.

“They left home barely more than boys and returned home heroes,” Obama said at Omaha where the fighting was so fierce it earned the name “Hell’s Beach.”

“Normandy, this was democracy’s beachhead. And our victory in that war decided not just a century, but shaped the security and well-being of all posterity,” Obama said. “Whenever the world makes you cynical – stop and think of these men.

During Obama’s speech at Omaha on Friday, French and American flags fluttered in a gusty breeze behind the president, who together with French President Francois Hollande addressed an audience seated against a backdrop of rows upon rows of headstones.

After Obama arrived via helicopter from Paris, where he had met Hollande for dinner on Thursday night, a military band played the French and U.S. national anthems.

Later the two world leaders walked to an observation deck at Omaha and looked across the beach for a few moments. Obama then met veterans from World War II and the Iraq and Afghanistan wars, several of whose stories he had mentioned in his speech.

Other services of varying sizes were going on in and around the five landing sites of the invasion to honor the more than 150,000 American, British, Canadian and other Allied D-Day troops who risked and gave their lives to defeat Adolf Hitler’s Third Reich.

Here’s the video (and the text):

The next time everyone is likely to gather, on either the 75th Anniversary of the invasion in 2019 or the 80th in 2024, much will have changed, More of the generation that fought their way onto the beaches and eventually all the way to the Elbe River will have passed way, the United States will have a new President, and Queen Elizabeth II, the only Head of State at today’s ceremonies who actually served in World War II, may well no longer be Queen. By the time the 100th anniversary arrives in 2044, World War II will be as far in the past as World War One is today. As President Obama said in his speech, it will then be up to succeeding generations to remember what those men died for us that day 70 years ago, and all that days that followed until May 8, 1945. Part of me wonders how well we’ll be at doing that,