Ta-Nehisi Coates is insightful and eloquent. He's wrong in this instance. 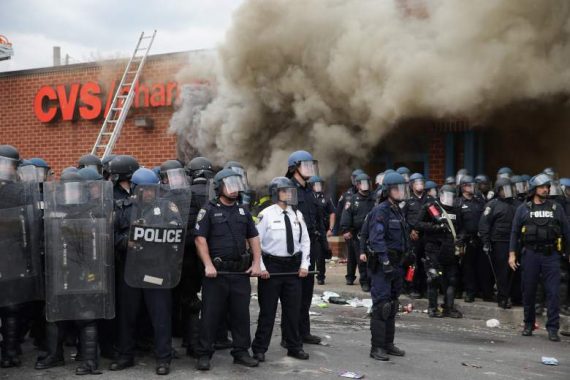 Ta-Nehisi Coates is the most important and eloquent writer on race relations in at least a generation. He has special standing to comment on the horrendous events unfolding in Baltimore:

I grew up across the street from Mondawmin Mall, where today’s riots began. My mother was raised in the same housing project, Gilmor Homes, where Freddie Gray was killed. Everyone I knew who lived in that world regarded the police not with admiration and respect but with fear and caution.

I’m a decade older than Coates and, well, white. My only connection to Baltimore is that my girlfriend lives there. She doesn’t live in a housing project. So, certainly, I view the rioting through a different lens. That said, I disagree strongly with the fundamental argument Coates makes in “Nonviolence as Compliance.”

Rioting broke out on Monday in Baltimore—an angry response to the death of Freddie Gray, a death my native city seems powerless to explain. Gray did not die mysteriously in some back alley but in the custody of the city’s publicly appointed guardians of order. And yet the mayor of that city and the commissioner of that city’s police still have no idea what happened. I suspect this is not because the mayor and police commissioner are bad people, but because the state of Maryland prioritizes the protection of police officers charged with abuse over the citizens who fall under its purview.

Gray’s death is both tragic and outrageous. That it’s part of a much larger trend—long understood by inner city residents, particularly those who are poor and black, but only a subject of national discussion since the events of Ferguson—of police brutality is as of yet unproven but certainly a reasonable starting point given the evidence. As Coates summarizes:

The case against the Baltimore police, and the society that superintends them, is easily made:

Over the past four years, more than 100 people have won court judgments or settlements related to allegations of brutality and civil rights violations. Victims include a 15-year-old boy riding a dirt bike, a 26-year-old pregnant accountant who had witnessed a beating, a 50-year-old woman selling church raffle tickets, a 65-year-old church deacon rolling a cigarette and an 87-year-old grandmother aiding her wounded grandson ….

And in almost every case, prosecutors or judges dismissed the charges against the victims—if charges were filed at all. In an incident that drew headlines recently, charges against a South Baltimore man were dropped after a video showed an officer repeatedly punching him—a beating that led the police commissioner to say he was “shocked.”

There’s no question that the police, under color of authority, hold a privileged position in our legal system. Their actions are presumed correct and those against whom their violence is directed are presumed guilty. Unless the actions take place on video—and sometimes even then—they tend to get away with it. And, of course, there’s a long history of violence against blacks being accorded lower priority.

At the same time,  it’s really difficult to bring charges against police officers for violence because their crimes tend not to have witnesses and they tend to have more credibility than their victims. Even in instances where the brutality is so egregious that the city settles a civil suit, the officer is unlikely to be prosecuted. Partly, that’s because the burden of proof is simply higher in a criminal case than in a civil suit. (And most civil suits are simply settled out of court, either to avoid the negative publicity or because the costs of litigation outweigh the costs of settlement.) But juries are extremely reluctant to convict a police officer because they’re presumed to be doing an incredibly dangerous job for the public good.

Regardless, the anger over the constant stream of outrageous cases such as those highlights is understandable. But from that strong foundation, he makes an unsupportable leap:

Now, tonight, I turn on the news and I see politicians calling for young people in Baltimore to remain peaceful and “nonviolent.” These well-intended pleas strike me as the right answer to the wrong question. To understand the question, it’s worth remembering what, specifically, happened to Freddie Gray. An officer made eye contact with Gray. Gray, for unknown reasons, ran. The officer and his colleagues then detained Gray. They found him in possession of a switchblade. They arrested him while he yelled in pain. And then, within an hour, his spine was mostly severed. A week later, he was dead. What specifically was the crime here? What particular threat did Freddie Gray pose? Why is mere eye contact and then running worthy of detention at the hands of the state? Why is Freddie Gray dead?

We simply don’t know. We have a good basis for conjecture. But the same system that places way too much discretion in the hands of the police in dealing with those suspected of minor crimes places a very high burden of proof in charging those officers with crimes. The only living witnesses, presumably, are the officers who detained Gray.

The people now calling for nonviolence are not prepared to answer these questions. Many of them are charged with enforcing the very policies that led to Gray’s death, and yet they can offer no rational justification for Gray’s death and so they appeal for calm. But there was no official appeal for calm when Gray was being arrested. There was no appeal for calm when Jerriel Lyles was assaulted. (“The blow was so heavy. My eyes swelled up. Blood was dripping down my nose and out my eye.”) There was no claim for nonviolence on behalf of Venus Green. (“Bitch, you ain’t no better than any of the other old black bitches I have locked up.”) There was no plea for peace on behalf of Starr Brown. (“They slammed me down on my face,” Brown added, her voice cracking. “The skin was gone on my face.”)

When nonviolence is preached as an attempt to evade the repercussions of political brutality, it betrays itself. When nonviolence begins halfway through the war with the aggressor calling time out, it exposes itself as a ruse. When nonviolence is preached by the representatives of the state, while the state doles out heaps of violence to its citizens, it reveals itself to be a con. And none of this can mean that rioting or violence is “correct” or “wise,” any more than a forest fire can be “correct” or “wise.” Wisdom isn’t the point tonight. Disrespect is. In this case, disrespect for the hollow law and failed order that so regularly disrespects the rioters themselves.

But “the aggressor” isn’t “calling time out” here. The mayor hasn’t assaulted anyone. Nor has the governor. Nor, for that matter, have the overwhelming majority of Baltimore’s police officers. Further, acknowledging the “disrespect” demonstrated over decades of inadequate response to police violence against the city’s black citizens, what else is the city leadership supposed to do in response to rioting? If they simply ordered the police out to let those feeling disrespected to vent their frustrations, they’d be rightly condemned as failing to protect those same communities.

Beyond that, as is almost invariably the case, most of the rioting here is using the outrageous incident in question—the subject of legitimate protests—as an excuse for mayhem. They’re not looting and burning Freddie Gray’s community to show respect for Freddie Gray.

Nonviolence and compliance with the law is an insufficient response to what’s ailing Baltimore. But it’s a minimum standard.