They’ve just announced on the Fox BCS hype-fest that the Florida Gators have been chosen to play the Ohio State Buckeyes for the (mythical) Division-I college national championship.

This was probably a foregone conclusion, as Florida vaulted past Michigan in the final polls. Adding intrigue and controversy to the situation, OSU’s Jim Tressel declined to participate in the coaches’ poll.

Florida passed Michigan and returned to No. 2 in The Associated Press Top 25 and the USA Today coaches’ polls released Sunday.

While the Gators had a slim lead of three points over Michigan in the AP poll, they were 26 points ahead of the Wolverines in the USA Today poll — a margin that could help get Florida into the national title game. The coaches’ poll is one of three components used in the Bowl Championship Series Standings, along with the Harris poll and a compilation of six computer ratings.

Ohio State’s Jim Tressel did not vote in the USA Today coaches’ poll to avoid the perception of a conflict of interest, a move the newspaper said could jeopardize his future in the selection process. “We are excited to play in the BCS title game against a tremendous opponent,” Tressel said in a statement. “After consultation with my director of athletics, Gene Smith, and based upon our unique position in the BCS standings, I believe it is only fair that we not participate in the final poll.”

Monte Lorell, USA Today’s managing editor for sports, said Sunday in a statement, “We are disappointed with coach Tressel’s decision, but our oversight role does not grant us authority to compel his participation. The agreement with the American Football Coaches Association obligates the panel of coaches to disclose final regular season ballots, without exception. “Coach Tressel’s future involvement in the poll will be part of our annual review with AFCA executive director Grant Teaff.”

Teaff, a former coach, said Tressel’s decision was “not something that we would like to have happen, but it’s kind of an unusual circumstance.” Until last year, the coaches’ ballots were not made public. Now, the final regular-season ballots are released. “It’s just a tough situation,” Teaff said.

You can’t blame him, really. It’s an awkward situation for a coach guaranteed a shot at the title to have the opportunity to help pick his opponents. Indeed, one without integrity could easily pick a lesser opponent by voting the #3 or #4 team #1 and leaving the higher ranked teams off the ballot. 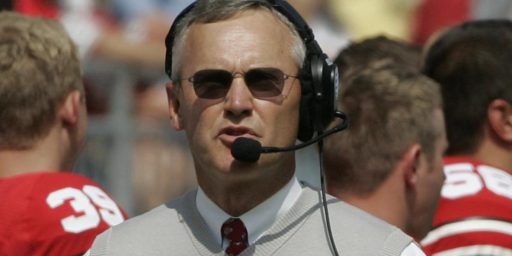 Jim Tressel Out at Ohio State