Benghazi: Incompetence But No Cover-Up

Yesterday's hearings shed more light while also raising yet more questions to which we'll likely never get a satisfactory answer. 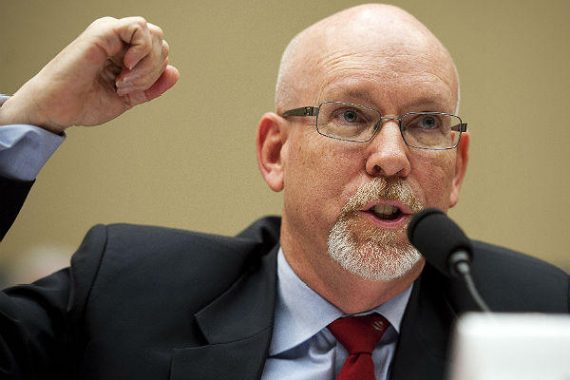 I must confess to having tuned out the investigations into the Benghazi attack that killed Ambassador Chris Stevens and three others long ago. Republicans, including 2012 presidential nominee Mitt Romney, seized on it for partisan political gain too early and it blew up in their face. Yesterday’s hearings before Congress, seemingly the hundredth set, which I absorbed by osmosis via my Twitter feed, seems to have shed more light on the situation while also raising yet more questions to which we’ll likely never get a satisfactory answer.

In a piece titled “Benghazi: Incompetence, But No Cover-up—The hearings deepen the tragedy, but not the scandal,” National Journal‘s Michael Hirsh brilliantly captures my sense of what we know now:

There was tragic incompetence, plainly, in the Obama administration’s handling of the Benghazi attacks, and even possibly some political calculation. It is a record that may well come to haunt Hillary Clinton, the first Secretary of State to lose an ambassador in the field in more than three decades, if she runs for president in 2016.

But the obvious Republican effort to turn this inquiry into the Democratic (Obama) version of the Iraq intelligence scandal that has tarred the GOP since the George W. Bush years — led by that least-credible of champions, the almost-always-wrong Darrell Issa — is just not going to amount to much.

The testimony Wednesday by three highly credible witnesses before the House Oversight and Government Reform Committee added to the serious questions that have been raised for months about Benghazi. Last December, Clinton’s own “Accountability Review Board” — chaired by two major national-security figures, retired Amb. Thomas R. Pickering and Adm. Michael Mullen—detailed a broad failure of U.S. intelligence and policy-making over the deaths of Amb. Christopher Stevens and three other Americans.

Statements and testimony in recent days from the three State Department officials, led by Stevens’ former deputy in Libya, Gregory Hicks, only appeared to underline the administration’s failure to take action, futile though it might have been, to save the lives of its emissaries. Hicks, in prepared testimony, said the U.S. military turned down his request for help during the attack, both special operations troops and F-16 fighters. Another witness, Mark Thompson, the deputy coordinator for operations at the State Department, was expected to say that Hillary Clinton sought to cut her department’s counterterrorism bureau out of the chain of decision-making, suggesting that she was downplaying the rise of terrorism in keeping with the administration’s political line during the 2012 presidential campaign (which Clinton has already denied). The last witness, Eric Nordstrom, the diplomatic outpost’s former chief security officer, has said that the Benghazi compound failed to meet security standards despite serious security threats.

The most moving — if still-not-quite scandalous — testimony came from Hicks, who described how he virtually begged for help as Stevens and his colleagues were being killed that night of Sept. 11, 2012. The help never came. The administration’s response has been that Hicks, a diplomat, is no expert in military capabilities, and his allegations have already been directly rebutted by both Gen. Martin Dempsey, the Joint Chiefs chairman, and former Defense Sec. Leon Panetta. Dempsey testified in February that it would have taken “up to 20 hours or so” to get F-16s to the site, and he called them “the wrong tool for the job.” Panetta testified that “the bottom line” is that “we were not dealing with a prolonged or continuous assault, which could have been brought to an end by a U.S. military response, very simply, although we had forces deployed to the region. Time, distance, the lack of an adequate warning, events that moved very quickly on the ground prevented a more immediate response.”

The closest thing we have at this point to a scandal remains the one that Romney and others tried unsuccessfully to exploit during the closing days of the campaign: Susan Rice’s being trotted out on the Sunday morning news programs to spread the known-to-be-incorrect talking point that the attack stemmed from a protest over a YouTube video.

What there is still no evidence of, however, all these months later, is a deliberate cover-up by Obama, Clinton or other senior officials concerning what they knew about the attack and when. As occurred last fall, in the heat of the presidential campaign, much of the questioning on Wednesday focused on why four days after the attacks, on Sept. 15, intel briefers sent U.N. Ambassador Susan Rice off to tape the Sunday talk shows with talking points that suggested Stevens’ death was the result of “spontaneous” protests at the U.S. Embassy in Cairo against a short film made in California lampooning the Prophet Mohammad.  According to Hicks, in a phone call after Rice’s appearance he specifically asked Beth Jones, the acting assistant secretary of State for the region, “why the ambassador had said there was a demonstration when the embassy had reported only an attack.” Hicks had said previously he thought what happened was “a terrorist attack from the get-go.”

Hicks’ testimony appeared to lend credence to longstanding GOP charges that the administration was deliberately hiding evidence that new al-Qaida-linked terrorist groups were at work killing Americans, since one of the president’s big talking points in the election was that he had decimated al Qaida.

In fact, however, even today it is not clear exactly what happened to precipitate the Benghazi attack, and Libya remains somewhat in a “fog of war” situation just as it was during the Benghazi attacks. It was only a week ago that the FBI posted images of three suspects captured by surveillance cameras the night of the attack, asking the public’s help in identifying them. Just two weeks ago the French embassy in Tripoli was hit by a mysterious car bomb, injuring two guards.

Intelligence officials say it took a week or so after Rice’s TV appearances to clarify, for certain, that there had been no protest before the assault on the compound —and that, as the office of Director of National Intelligence James Clapper said in a statement on Sept. 28, two weeks after Rice spoke, that “it was a deliberate and organized terrorist attack carried out by extremists.”

The intelligence community continues to maintain the same defense: that at the time of Rice’s appearance it simply did not have a good grasp of what had happened, and in some cases could not divulge classified information that was coming in about the attack.

I remain unsold on this explanation. If the administration simply didn’t know what happened at that point, why invent a talking point? And people on the ground surely knew there was no protest.  Even if we totally reject the “fog of war” explanation and discount various “protect sources and methods” arguments and attribute Rice’s statement purely to political calculation—and I don’t think the evidence takes us that far—it’s pretty minor as scandals go.

Otherwise, the tragedy is that a lot of people and institutions—including the Congress—made a series of what hindsight revealed to be bad decisions. But American embassies, much less remote consulates, are not armed fortresses. They’re soft targets because they have to be welcoming in order to perform their mission. Given how many hot spots we have American diplomats stationed, the true wonder is that these attacks are so rare.

UPDATE: The other thing that causes me some concern—and this is new news, at least to me—is Hicks’ claim that he was punished for speaking to a congressional delegation about the administration’s early stance on what happened. He claims Clinton’s chief of staff chewed him out and that he was effectively demoted. While, again, bullying of career officials by political appointees is hardly unprecedented or of Watergate levels, it’s troubling if true.