Bernie Sanders Within One Point Of Hillary Clinton In Nevada

Another state, another Sanders surprise that is likely to raise questions about Hillary Clinton's campaign. 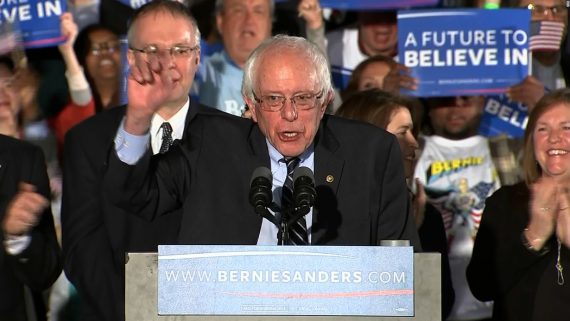 While Republicans are headed toward a primary in South Carolina on Saturday, Democrats will be holding their caucuses out in Nevada and a new CNN/ORC poll shows Hillary Clinton and Bernie Sanders even in a contest that has proven to be notoriously unpredictable:

Likely Democratic caucusgoers in Nevada are split almost evenly between Hillary Clinton and Bernie Sanders ahead of Saturday’s caucuses, according to a new CNN/ORC Poll.

Though Clinton holds an edge over Sanders on handling a range of top issues, the results suggest the extremely close race hinges on divided opinions on the economy.

Overall, 48% of likely caucus attendees say they support Clinton, 47% Sanders. Both candidates carry their demographic strong points from prior states into Nevada, with Clinton holding an edge among women, while Sanders tops the former secretary of state among voters under age 55.

One exception emerges though: Although the pool of potential caucusgoers in Nevada is more racially diverse than those who participated in Iowa or New Hampshire, the racial divide among likely caucusgoers isn’t nearly as stark as among voters in South Carolina, with both white and non-white voters about evenly divided between the two candidates.

The economy is rated the top issue by 42% of likely Democratic caucusgoers, and which candidate would better handle it seems a central division in the race.

When asked who would do more to help the middle class, Sanders narrowly tops Clinton among all likely caucusgoers, 50% to 47%. Likely caucusgoers are also split on which candidate best represents Democratic values, 50% say Clinton does, 49% Sanders.

As was the case in Iowa, Sanders’ support rests partly on those who are not regular participants in the caucus process, and turnout could play a role in whether the results reflect this close a race on Saturday.

One major caveat to keep in mind is that the Nevada caucuses have proven to be very difficult to poll accurately in the past, as veteran Nevada political analysts such as Jack Ralston have observed several times. In part, this has to do with the manner in which the caucuses are conducted, which if anything involve an even more convoluted process than the one that Iowa uses. In any case, it’s worth noting that polling prior to the 2008 Nevada caucuses showed Hillary Clinton leading Barack Obama and she did ultimately end up winning that contest, so these numbers shouldn’t simply be ignored.

Another caveat to keep in mind is that there has been very little polling in Nevada so it’s hard to judge if this poll is consistent with a trend, or some kind of outlier. The limited amount of polling done in the state before the end of 2015 showed Clinton with her typical at the time massive lead over Sanders, but that number obviously became inapplicable long ago. More recently, the only other poll of the Democratic race in the Silver State showed Clinton and Sanders in a tie, but that’s from an unknown polling firm that has ties to Republicans so it’s unclear how reliable it is. Given that limited amount of data, we’re basically headed into this contest somewhat blind.

In any case, if these numbers are accurate then they suggest that Sanders is within striking distance of Clinton in yet another state. Given that, you can expect that this poll will get a lot of attention from the political media today and that the results out of Nevada will be closely watched on Saturday night. Even if one believes, as I do, that Clinton will still ultimately win the Democratic nomination, if Sanders manages to win in Nevada, or even comes close like he did in Iowa, then it will inevitably lead to the typical round of questions about the future of Clinton’s campaign and, likely, more rumors of a staff shakeup for a campaign that obviously isn’t going quite a smoothly as the candidate would like.