Bill Cosby heads back to court for a retrial on the sexual assault allegations against him but it's not going to be the same as the first. 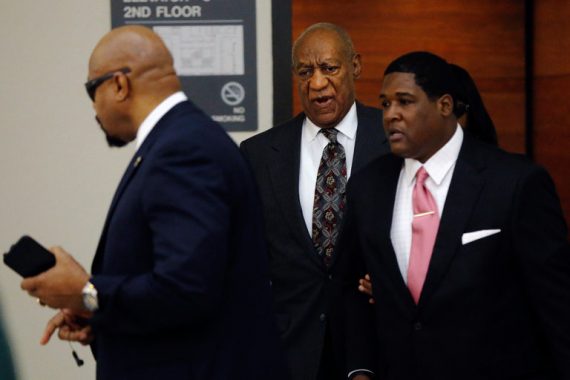 Less than a year after his first trial ended in a mistrial thanks to a hung jury, comedian Bill Cosby heads back to Court in suburban Philadelphia this morning for the beginning of round two of the sexual assault charges that have been pending lodged by a woman named Andrea Constand, who contends that Cosby drugged her and forced her to have sexual relations more than a dozen years ago. For several reasons, this trial promises to be very different for both the prosecution and the defense:

When it begins Monday, Bill Cosby’s retrial on sexual assault charges will appear very similar in some respects to the first trial that ended inconclusively nearly ten months ago with a deadlocked jury. The courthouse in Norristown, Pa., will be the same. Andrea Constand, 44, will take the stand again to give her account of an encounter at Mr. Cosby’s home outside Philadelphia in 2004 that turned, she said, into a drugging and an act of sexual molestation. Mr. Cosby’s defense will still center on the argument that this was a consensual act.

But much else about this second trial will be different, starting with how the prosecution will present its case.

At the first trial, one other woman who said she was also drugged and assaulted by Mr. Cosby, 80, was allowed to testify in addition to Ms. Constand. This time, Judge Steven T. O’Neill of the Montgomery County Court of Common Pleas is allowing prosecutors to present the accounts of five additional women with similar accusations.

One of those accusers is scheduled to be Janice Dickinson, the onetime supermodel, who said Mr. Cosby had drugged and raped her in a Lake Tahoe hotel room in 1982. (She has also sued Mr. Cosby for defamation.) The four other so-called “prior bad acts” witnesses were, at the time, aspiring actresses or models, and in one case a bartender, who say they were assaulted by Mr. Cosby between 1982 and 1989, all incidents he denies occurred.

Judge O’Neill has not said why he has allowed more accusers this time around. But experts say the additional accusations will help bolster Ms. Constand’s credibility as just one of a line of women who say Mr. Cosby abused them. She is the only woman whose complaint has resulted in criminal charges against the entertainer.

The admission of additional testimony by accusers whose claims against Cosby occurred far too long ago to be the subject of viable criminal or civil claims at this point due to the expiration of the applicable statutes of limitation is a controversial one that mirrors an issue that frequently comes up in criminal trials. As a general rule, courts limit the ability of the prosecution to introduce evidence of what are called “prior bad acts” due to the concern that allowing a jury to hear evidence of charges unrelated to the one before them could cause them to unfairly consider the Defendant’s guilt or innocence based on evidence unrelated to the case before them. Broadly speaking, such evidence or testimony is barred unless it falls within some very limited exceptions.

In addition to these differences, there will also be some differences on the defense side. This time, Cosby will be represented a new legal team led by Thomas Mesereau, a high-profile criminal defense attorney who is perhaps best remembered as the man who won an acquittal for Michael Jackson in his 2005 trial on charges of child molestation. It seems apparent that Mesereau will follow a far different strategy from Cosby’s first legal team. At least part of that strategy will include calling three witnesses who did not testify in the first trial, including one woman formerly affiliated with Temple University when Constand worked there who is expected to testify about conversations she had where Constand said she could make money by making false claims that a famous person had sexually assaulted her. Additionally, the jury will be drawn locally rather than brought in from another jurisdiction. Given Cosby’s ties to the Philadelphia area, this could prove to be significant.

Another major difference, of course, is the fact that Cosby’s retrial will be taking place in the shadow of the #MeToo movement, which has impacted every area of American life from entertainment and business to politics:

Perhaps nothing is as different from one trial to the next as the atmosphere in which it is unfolding. The Cosby case will be the first high-profile sex abuse trial to test what effect, if any, the #MeToo movement has on jurors.

Some experts think it may give jurors a greater willingness to believe people who come forward with accusations of sexual assault.

At least one juror in the first trial reported some problems with Ms. Constand’s credibility and had a question about why the many women who accused Mr. Cosby did not come forward sooner.

The entertainer’s lawyers, however, say they are worried that the barrage of publicity surrounding other bad-behaving men will lead jurors to lump Mr. Cosby in with the others, making it tougher for him to receive a fair trial.

For these and several other reasons, this trial is expected to last longer than the first one did. Whether it leads to a similar outcome or something more decisive is something only time will tell.