BLIX ARE FOR KIDS

The delusional Hans Blix says his inspectors could be back in Iraq two weeks from getting the green light. Although he knows Bush and Co. have no interest in his return,

Blix nonetheless predicted Washington would need the U.N. teams back to ensure the credibility of their investigation.

“So far they have not found any weapons of mass destruction,” he said. “I think at some stage they would like to have some credible international verification of what they find.”

Asked if Iraq might have been telling the truth all along in denying it had any weapons of mass destruction, Blix said he was “perhaps a little more inclined to believe” Baghdad now than before the fighting began.

“I think it is too early to draw conclusions. They may have to look more closely at a lot of sites,” he said.

“We have never claimed that Iraq had weapons of mass destruction, although we could not rule it out. Now we will see if London and Washington were right. I am very curious and can only wish them luck with their search,” he told German magazine Der Spiegel in an interview to be published on Friday.

One wonders if he came upon some chemicals and smoked them. 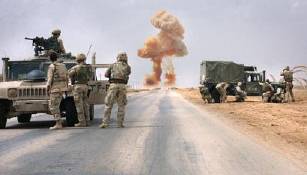