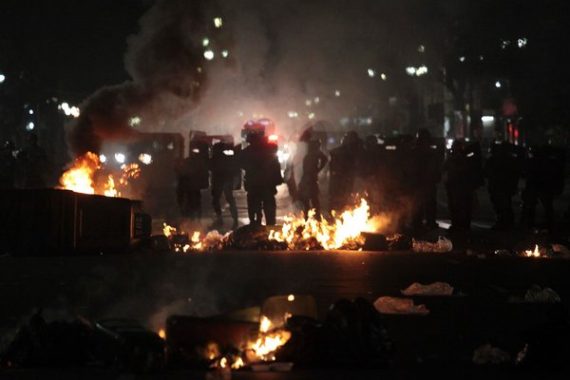 The protests in Brazil widened overnight while simultaneously leading political leaders to take steps to attempt to address the protesters concerns:

SÃO PAULO, Brazil — A wave of new protests swept through areas of São Paulo, the country’s largest city, early on Wednesday as groups of demonstrators shut roads leading into the city, snarling traffic and increasing pressure on political leaders.

Shaken by the biggest challenge to their authority in years, Brazil’s leaders made conciliatory gestures on Tuesday to try to defuse the protests engulfing the nation’s cities. But the demonstrators have remained defiant, pouring into the streets by the thousands and venting their anger over political corruption, the high cost of living, and huge public spending for the World Cup and the Olympics.

“I love soccer, but we need schools,” said Evaldir Cardoso, 48, a firefighter at a protest here with his 7-month-old son.

On Wednesday, the state news agency, Agência Brasil, said that a branch of the federal police deployed in cases of social unrest would be sent to five of the cities hosting the Confederations Cup soccer tournament to help with security.

The demonstrations initially began with a fury over an increase in bus fares, but as with many other protest movements in recent years — in Tunisia, Egypt or, most recently, Turkey — they quickly evolved into a much broader condemnation of the government.

By the time politicians in several cities backed down on Tuesday and announced that they would cut or consider reducing fares, the demonstrations had already become a more sweeping social protest, with marchers waving banners bearing slogans like “The people have awakened.”

“It all seemed so wonderful in the Brazil oasis, and suddenly we are reliving the demonstrations of Tahrir Square in Cairo, so suddenly, without warning, without a crescendo,” said Eliane Cantanhêde, a columnist for the newspaper Folha de São Paulo. “We were all caught by surprise. From paradise, we have slipped at least into limbo. What is happening in Brazil?”

Thousands gathered at São Paulo’s main cathedral and made their way to the mayor’s office, where a small group smashed windows and tried to break in, forcing guards to withdraw.

In Juazeiro do Norte, demonstrators cornered the mayor inside a bank for hours and called for his impeachment, while thousands of others protested teachers’ salaries. In Rio de Janeiro, thousands protested in a gritty area far from the city’s upscale seaside districts. In other cities, demonstrators blocked roads, barged into City Council meetings or interrupted sessions of local lawmakers, clapping loudly and sometimes taking over the microphone.

The protests rank among the largest outpourings of dissent since the nation’s military dictatorship ended in 1985. After a harsh police crackdown last week fueled anger and swelled protests, President Dilma Rousseff, a former guerrilla who was imprisoned under the dictatorship and has now become the target of pointed criticism herself, tried to appease dissenters by embracing their cause on Tuesday.

“These voices, which go beyond traditional mechanisms, political parties and the media itself, need to be heard,” Ms. Rousseff said. “The greatness of yesterday’s demonstrations were proof of the energy of our democracy.”

Her tone stood in sharp contrast to the approach adopted by Turkey, where similar demonstrations over what might also have seemed an isolated issue — the fate of a city park in Istanbul — quickly escalated into a broad rejection of the government’s legitimacy from a vocal section of the population.

But while Turkey’s prime minister has dismissed the protesters as terrorists, vandals and “bums,” Ms. Rousseff seemed acutely aware of the breadth of frustration in Brazil over the gap between the nation’s global aspirations and the reality for many millions of its people.

The protests in Brazil are unfolding just as its long and heralded economic boom may be coming to an end. The economy has slowed to a pale shadow of its growth in recent years; inflation is high, the currency is declining sharply against the dollar — but the expectations of Brazilians have rarely been higher, feeding broad intolerance with corruption, bad schools and other government failings

While I am by no means drawing direct comparisons between the Arab Spring, the protests in Turkey, and these protests in Brazil, it is fascinating that, in all three cases, protest movements that started over relatively minor things — a fruit vendor’s protests against police harassment in Tunisia, a protest over redevelopment of a park in Istanbul, and now bus fare in Brazil — but quickly expanded into something far larger. It suggests that there was conflict and resentment beneath the surface that was just waiting for the right opportunity to express itself, and it makes one wonder what other parts of the world might also be hiding such slowly boiling waters waiting to vent themselves under the right circumstances.