Within an hour last evening, I passed along and retracted two breaking news stories on Twitter.

Within an hour last evening, I passed along two breaking news stories on Twitter. First, that former Florida governor Jeb Bush was set to endorse Mitt Romney ahead of that state’s suddenly very important primary. Second, that legendary but recently disgraced former Penn State football coach Joe Paterno had died. Within the next hour, I passed along news that both of those stories were premature.

While Twitter is at the low end of my diligence hierarchy–I’ll pass along (by re-tweeting) stories from trusted sources without verifying them, sometimes even without reading them–compared to blogging, much less more deliberately researched pieces written for publication elsewhere, that wasn’t my downfall in either case here. Both stories came from very solid support chains.

My re-tweet of the “Jeb Bush to endorse Romney” story re-tweets Stephen Hayes and Patrick Ruffini, well connected Republican analysts, and they were passing along a report from Josh Marshall’s well regarded Talking Points Memo which was passing along a CNN report.

I actually sent out three re-tweets in rapid succession on the Paterno story. First, Alabama sports journalist Izzy Gould‘s recollection that he’d covered Paterno’s last loss as a head coach, to the University of Alabama, last year. Then, NYT NFL writer Judy Battista‘s passing along of a CBS Sports report. Then, NFL business guru Andrew Brand‘s re-tweet of Onward State’s report “Our sources can now confirm: Joseph Vincent Paterno has passed away tonight at the age of 85.”

Both incidents demonstrate the nature of a Twitter stream: well-connected folks are connected to one another and things can go viral very quickly because of it. Bad reporting can spread in a matter of a few minutes. Thankfully, so can good reporting.

Those of us following people who follow these sources–which is to say, pretty much everyone likely to be on Twitter around 9 on a Saturday night–made the story go viral. But, Sonderman notes, “Minutes later though, other news organizations contradicted the reports, citing a family spokesperson. New York Times reporter Mark Viera appeared to be among the first.” Following that, “CBS Sports updated its obituary to include attribution to the Onward State report and a second paragraph noting contradictory claims. Other news organizations scrambled to react.” Soon, “Joe Paterno’s son, Jay, later tweeted his own report.” Finally, “Around 9:29, about 45 minutes after its first report, Onward State apologized to its Twitter followers.”

I never saw the Online State retraction but I did re-tweet several retractions, including the Jay Paterno tweet, in something close to real time. How quick did this all happen? Well, take a look at my tweets from last night: 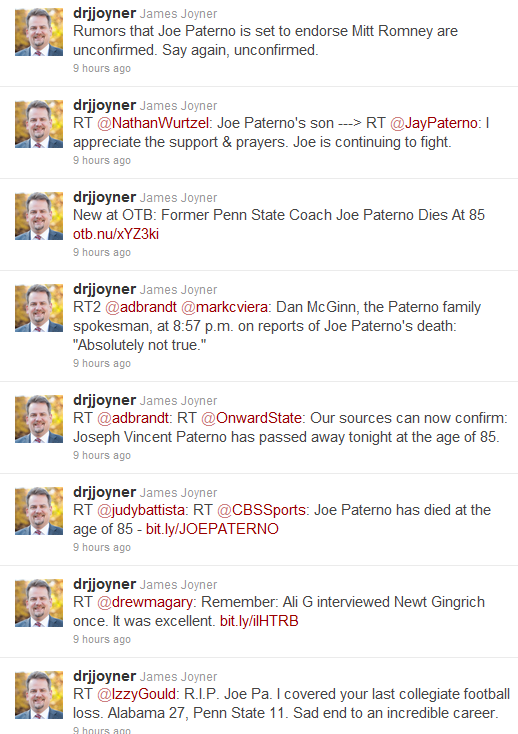 Aside from the Ali G/Newt Gingrich tweet, seven successive tweets took me from the original Izzy Gould report to two others to Doug Mataconis’ OTB post passing along the news (which he unpublished in the space of maybe 5 minutes) to the “family spokesman” and Jay Paterno’s denials.

My last tweet on the subject for the night, “Rumors that Joe Paterno is set to endorse Mitt Romney are unconfirmed. Say again, unconfirmed,” may have been in questionable taste. But it reflects my bemusement over the whole thing.

Update (Doug Mataconis): As noted in the comments, Joe Paterno’s family reports that he passed way early this morning.