Borders Books is closing, because the free market works. 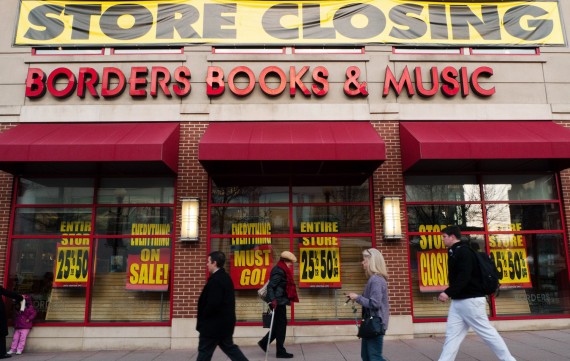 The liquidation and eventual shuttering of the 40-odd year Borders Books chain,  which became official with a Bankruptcy Court filing yesterday and a liquidation sale that started at all Border’s locations today has led to much reflection and commentary across the blogosphere, as well as a some disagreement as to whether the cause of Borders’ destruction can be attributed to the free market, or something else.

Anthony Gregory at The Independent Institute sees the end of Borders as an example of the triumph of the market:

For the consumers, the downfall of Borders is glorious, much as was its climb to success. In the rearrangement of resources to serve customers we see the beautiful actions of the market economy reconfiguring the world to provide the goods and services that are most wanted and needed in the most effective way. To ignore the upside to Borders’ downfall is as fallacious as to focus only on the downside of its upswing, as did most of the anti-corporate left in the last decade. But today we see that it was not government, nor socialist agitation, that brought the axe down on this big company. It was the matrix of demand provided by customers. It was the consumer base, acting in a manner much more democratic in the good sense of the word, and much more peaceful and socially productive, than anything we see in the political process. Thank goodness there is no doctrine of “too big to fail” in the book store industries. If the government bailed out Borders as it has so many financial institutions, surely the customers would suffer.

The failure of Borders is a beautiful thing, coming as it does from the market process. If voluntary competition should one day bring Amazon.com down, in the midst of a competing commercial success today unimaginable but even more friendly to consumers than that wonderful online store,  we will again have reason to celebrate.

Daniel Larison objects, claiming that one of the reasons for Amazon’s success was related to the quirks in the law that allow it to conduct business without collecting sales taxes:

Amazon has flourished as much as it has thanks to the unfairness of being able to compete with physical bookstores without the burden of paying taxes to state authorities. It has gained at the expense of other firms by evading taxation that its competitors could not evade, and it has vigorously opposed attempts to subject it to the same rules. One man’s successful business model is another man’s example of gaming the system. Meanwhile, ten thousand Borders employees will have to find other work in a miserable labor market, and the book industry as a whole will suffer significantly from the loss of sales that will follow. If this is a “beautiful thing,” I’d hate to see what a disaster looks like.

First of all,  I don’t think that Gregory was saying that it’s a good thing that those 11,000 people are going to lose their jobs, certainly it isn’t. However, there is something to be said for an economic system that rewards good and bad choices so starkly because, as I’ll discuss below, it’s fairly clear that the demise of Borders had little to do with sales taxes and everything to do with its own bad business decisions. Does the sales tax exemption give Amazon some advantage over its competitors? Probably it does, but that strikes me as being, at best, a minor part of the reason that Amazon has succeeded while Borders has failed.

Second, as Gregory already notes there’s plenty of evidence for the argument that government policies also contributed to Borders rise in the 90s:

There were ways in which government may have initially exaggerated the success of these stores. First there are the indirect subsidies that come with government planning, eminent domain, the quasi-socialized nature of strip-mall production, and so forth. More important, such establishments seemed to thrive in the real-estate and dotcom-related booms of the late 1990s and Bush era. The underlying cause of these booms, in my opinion, was credit expansion, directed by the Federal Reserve in large part with the deliberate goal of bringing about heightened economic activity, in the second case especially in real estate.

Yet whether or not the government had a role in pumping up Borders, it was the market that began signaling to the world that the company’s days were probably numbered. It is the force of the market that is bringing the business to its knees.

If Larison were correct that Amazon’s luxury of not having to collect sales taxes on book (and music) transactions were the main reason that it was able to out compete Borders, then that brings a number of questions to mind.  How does the rise of Amazon explain the downfall of smaller and mid-size chains like B. Dalton, Crown, and Brendtano’s ? It doesn’t, of course, because for the most part, those chains, along with many independent bookstores were themselves the victims of the rise of the Borders and Barnes & Noble mega-stores in the 90s. And, speaksng of Barnes and Noble, why has this company managed to succeed where Borders has failed despite being tied down by the same bricks-and-mortar disadvantages, not to mention that evil sales tax? The answer, of course, is that the main reason that Borders failed is because they made a series of bad decisions that pretty much doomed them to their fate:

1. It made a fatal deal with Amazon
In 2001, Borders cut a deal with Jeff Bezos & Co. to have Amazon.com run its website, which may have been the beginning of the end, says Matt Townsend at Bloomberg. “I remember thinking this is the weirdest thing… and [that] it was the last thing we wanted to do,” says Manish Vyas, then a manager of Borders’ online unit. “It ended up being a customer-harvesting vehicle for Amazon.” Divorced from its online component, Borders continued to expand its brick-and-mortar locations until, finally in 2008, the bookseller debuted its own website. Too late: Amazon had already gobbled up a massive chunk of online market share and released the first Kindle.

2. Borders made a losing bet on CDs and DVDs
Borders “went heavy into CD music sales and DVDs, just as the industry was going digital,” and “Barnes & Noble was pulling back,” says investment researcher Peter Wahlstrom, as quoted by NPR. Borders’ “big bet in merchandising” turned out to be a losing one. In 2006, CD and DVD sales generated $600 million in sales for Borders, 17 percent of its revenue, notes Townsend. By 2009, iTunes had taken over, and sales of CDs and DVDs at Borders had fallen by 28 percent.

3. It jumped on the e-book train too late
Amazon released the first Kindle in 2007, while Barnes & Noble followed up the next year with its Nook e-reader. By the time Borders finally decided to get into the e-book biz, it was too far in the red to spend much money on devising a digital strategy. Instead, it outsourced the problem to Kobo Inc., a Canadian e-reader company, and started selling their wares in 2010. Just last week, Borders shops displayed a “great big table of Kobo readers,” says Harry McCracken at PC World. “But it was clearly far too little, far too late.”

4. Borders built too many stores
Even “if e-books didn’t exist, I’m pretty positive that Borders would have still collapsed in much the same way,” says McCracken . “While Borders was busy giving the web and e-books short shrift, it was also doubling down on the notoriously tricky business of running brick-and-mortar superstores.” Late last year, I counted four Borders stores in San Francisco, and three were no more than a mile and a half apart. “I’m no retailing genius, but I couldn’t figure out how the city could support so many giant bookstores in so little space.” Barners & Noble, by comparison, has only one store in the city.

It wasn’t one wrong decision that doomed Borders really, but the combination of all of them that, put together and then combined with the bad economic of the past several years, made any chance that they’d continue to exist in their present form. The whole sales tax issue may have played a role in the process but, as Barnes & Noble shows us, that factor alone doesn’t have to create a competitive disadvantage if you make the right business decsision.

This is what Anthony Gregory means by the process being glorious. The market is a continuous system of  signals sent to businessmen and consumers upon which they make decisions. When they make the wrong decisions, they suffer the consequnces and, if they make enough wrong decisions, the business will fail. It’s not a happy day when something like that happens, but it’s far better than allowing inefficient businesses to keep operating out of nostalgia or some other misplaced desire that results in resources being utilized ineffiiciently.

One final note about the closing of Borders. In  their  on the subject, David Weigel and Matthew Yglesias notes the social aspects of stores like Borders and the manner in which they encouraged browsing and just kind of haning out drinking coffee. I suppose it’s sad to see such a venue fade away. I used to do that myself back in the day, although it’s been quite a while since I’ve had either the time or the opportunity to spend endless amounts of time hanging out in a bookstore. To some extent, that social role is now fulfilled by Starbucks and similar locations that, mostly, encourage people to hang out during the day as long as you’re not unreasonable about it. But commercial space is expensive, especially in the urban areas where Weigel and Yglesias live, and I’m not sure that providing a place to chill to young single people is really the road to breaking even, never mind profits. In the end, it certainly wasn’t for Borders.