The Festivus For The Rest Of Us Edition OTB Caption ContestTM is now over.

The Festivus For The Rest Of Us Edition OTB Caption ContestTM is now over. 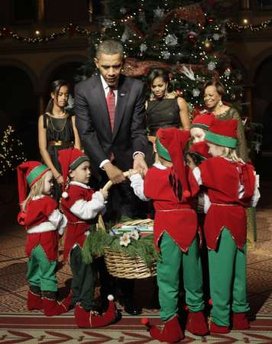 Second: charles austin – I’m Mister Stimulus, I’m Mister Won.
I’m Mister A-Lister, I am the Chosen One.
They call me Hope Miser. Whatever I touch
Turns to dust in my clutch, I’m too much.

Third: Robert W. Armijo – “And the Liberal Spin says: Behold! The Promised One delivered from a mere basket containing a Lame Duck Congress, feeding the masses, which could not be brought forth before when he was in control of 2 out of the 3 branches of government, for it was not the appointed time.”

John Burgess – “Come on, you little buggers, chip in… it’s your health care plan, too!”

mannning – No dammit, it’s my basket! Back off!

Matt – The Gift of the Midgets

Doug Mataconis – Yeeks, you never know what you might find in the waters off Palin’s Alaska.

We took up a collection and got you a clue, Mr. President

(Geico Commercial)
Is it a bad idea for a Tax and Spend Democrat to play Santa Claus?.

Not just another HallmarkEarmark Holiday?

“No, no, don’t pull the basket down, that dang G.A.Phillips will think I’m bowing.”

The Thursday Contest is having a blast.