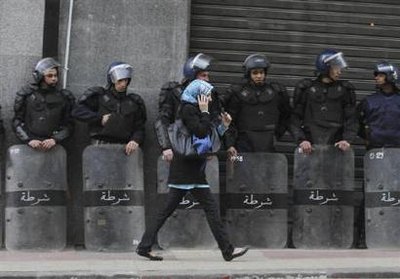 First: JazzShaw – You’ve been watching too much CNN, my friend. One woman with a Blackberry does not qualify as a “riot.”

Second: MstrB – Habib, I know she has nice ankles, but I’ve always been a wrist guy.

Third: Maggie Mama – Katie Couric will go anywhere, do anything, in an attempt to up her ratings.

Michael Hamm – Can you hear me now!

Peterh – Yo….guys…..when this gig is up, I hear there’s work in some place called…..Wisconsin….

So clear you can hear a regime drop.

The Thursday Contest has a new scheme to hatch.