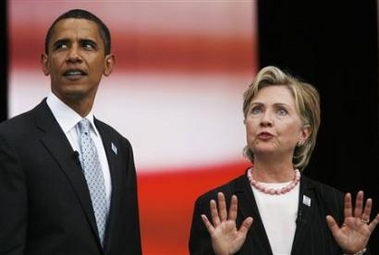 First: Deathlok – In her bid for the Presidency, Hillary Clinton discovers that the Glass Ceiling has walls holding it up.

Second: scully – Now Bill – put down the intern and no one will get hurt.

Bithead – Oh, NO! It’s the ghost of Vince Foster!

elliot – Hillary: If elected? I can do a mime in a glass box.

“First Kuchinich is missing, and now Edwards takes a nose dive off the stage… Hillary did you see what happened?”

Both Hillary and Obama show up to tout Senator Clinton’s new Vince Foster tell all — If I did it!

…stay tuned to hear Daddy More Bucks and Lib’ral Morphin’ Nanny singing The Sun Will Come Out Tommorrow in the remake of the classic musical NANNY (state).

Hillary does the Wayne’s World fade out.

Monday Contest just wants to be your Teddy Bear.