NPR is reporting that Edwards is the guy. I’ve yet to get my e-mail from the Kerry campaign.

After months of speculation and a highly secretive selection process, presumptive Democratic presidential nominee Sen. John Kerry, has chosen his colleague Sen. John Edwards as his running mate for the 2004 presidential election, sources close to the campaign say.

Kerry is expected to make an official announcement at a rally in downtown Pittsburgh, Pennsylvania, at 9 a.m. ET.

One source described Kerry, who has stressed secrecy throughout the vice presidential search process, as “adamant” that he deliver the news, rather than having it break through the media.t.

So much for that, eh?

In anticipation of a VP announcement, the Kerry campaign has distributed a memo to the Democratic National Committee and to Democratic governors and members of Congress outlining “recommended conduct” for the days after Kerry’s revelation, according to Democratic officials.

The memo asks officials and officeholders to decline all interviews on the first day of the announcement so that the only Democratic voices heard will be those of Kerry and his running mate, the officials said.

The memo urges prominent Democrats to go out in force on the second day to rebut expected GOP attacks on his choice, according to the officials.

It was possible that the campaign’s announced schedule would be changed Tuesday if the vice presidential pick is announced.

Throughout the process, aides have stressed that there would be a surprise or unique wrinkle to the announcement. It would be highly unusual for a presidential nominee to announce his choice to join the ticket without that choice at his side.

Kerry campaign officials announced last week he will use another unique tactic to get the word out on his No. 2 pick — sending the news out via e-mail to campaign supporters and contributors.

It would be amusing if Kerry announces someone other than Edwards–or Gephardt–at the 9 a.m. rally in Philadelphia. 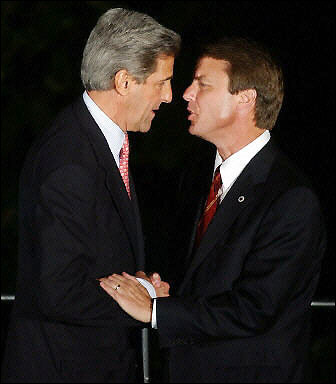 UPDATE: Reaction will be forthcoming in subsequent posts, but Kerry’s own words are rather amusing on the Edwards front. (Again, presuming the reports are true. I’m still hoping they’re not, just for the entertainment value.)

NYT (July 2) – Will It Be a Match Made in a Political Foxhole? A Cradle Robbing? A Twin? [RSS]

“In the Senate four years, and that is the full extent of public life – no international experience, no military experience – you can imagine what the advertising is going to be next year,” Mr. Kerry said of Mr. Edwards just before the Iowa caucuses, adding: “When I came back from Vietnam in 1969, I don’t know if John Edwards was out of diapers then. Well, I’m sure he was out of diapers.”

Mr. Kerry called Mr. Edwards that night to apologize. For his part, Mr. Edwards has at times been critical of Mr. Kerry’s skills as a campaigner in talking to other Democrats, though he has been a full-throated Kerry supporter since dropping out of the presidential race.

This is certainly no more embarrasing than the things George H.W. Bush said about Ronald Reagan in 1980, and he worked out fine as a vice presidential choice, but the quotes are always amusing when a former opponent gets nabbed for the ticket.

UPDATE (8:30): Drudge now has an (incredibly grainy, unreadable) scan of the promised e-mail announcement of Edwards as running mate. For whatever reason, mine hasn’t arrived.

Steve/Feddie “Kerry, wisely, chooses a Southern boy, Edwards, to be his VP”

Blackfive: “He should have begged Hilary to be on the ticket. ”

Michele Catalano: “[S]omeone at the New York Post is going to get fired today.”

Jon Henke: “The Gephardt noise was just a feint, designed to lower expectations.”

Alex Knapp: “[T]here’s going to be some major buyer’s remorse when Kerry is compared to his VP nominee.”

Steven Taylor argues that Gephardt would have been better and provides a roundup of his own.

Jeff Goldstein chronicles those not chosen.

Dan Gillmor: “Edwards’ blatant economic protectionism during the primary campaign is a worry.”

Hugh Hewitt: “John Edwards is no more prepared to run a war than he is to run a small state or a large corporation.”

Sen. John Kerry has chosen his colleague and former presidential rival Sen. John Edwards as his running mate for the 2004 presidential election. Kerry announced the choice at a rally in Pittsburgh, Pennsylvania, telling the cheering crowd that Edwards is “a man who understands and defends the values of America.”

Kerry placed the phone call to Edwards Tuesday morning and he readily accepted, a campaign official told CNN. Edwards was expected to join him later in the day for the first joint appearance of the ticket.

One suspects that the phone call, if it took place at all, was merely a formality. Unless Kerry is a complete idiot, he wasn’t going to ‘pop the question’ shortly before the official announcement and catch the guy off guard.

Edwards, 51, a wealthy former trial lawyer and first-term senator, was the last candidate standing against Kerry in the battle for the Democratic nomination earlier this year after igniting his candidacy with a surprise second-place finish to the Massachusetts senator in the Iowa caucuses. His lone victory in the primaries came in his home state of South Carolina, but he made a lasting impression on many Democrats with his powerful message decrying the “two Americas,” divided between the wealthy and the rest of the population, prompting some in the party to compare his campaign skills with those of former president Bill Clinton.

Democratic strategists said Edwards would add energy and excitement to the Democratic campaign, bring southern regional appeal to a ticket headed by a Bostonian and help Kerry woo suburban and swing voters in battleground states in the Midwest and elsewhere.

Edwards lacks extensive foreign policy experience at a time when national security is one of the central issues in the presidential campaign, and his years as a trial lawyer drew criticism from the White House and other Republicans during the Democratic primaries.

Even before the choice was announced, the Bush-Cheney campaign sought to diminish the choice. Spokeswoman Nicolle Devenish said in an early morning e-mail that Kerry’s selection would be the candidate’s second choice, a reference to the fact that Kerry initially sought to recruit Republican Sen. John McCain of Arizona, who is supporting Bush for reelection. The Bush campaign announced it would begin airing a new television ad featuring McCain’s support of Bush.

“I have chosen a man who understands and defends the values of America,” Mr. Kerry said. “A man who has shown courage and conviction as a champion for middle class Americans and for those struggling to reach the middle class. A man who has shown guts and determination and political skill in his own race for the presidency of the United States.”

Mr. Edwards released a statement later saying that he was thrilled to accept Mr. Kerry’s ofer. “I’ve served with John Kerry,” Mr. Edwards said. “He is a man of strength, character and courage. He has a vision for our country that will make life better for all Americans Ã¢€” those in the middle class who struggle every day to make ends meet, and the millions of Americans fighting to enter the middle class. “I look forward to seeing all of you in the days ahead and talking to the American people about the next president of the United States,” Mr. Edwards said.

President Bush said Vice President Dick Cheney had called Edwards after the announcement was made to say he welcomed him to the race, “as do I.” “And I look forward to a good, spirited contest,” the president said to reporters in the Oval Office.