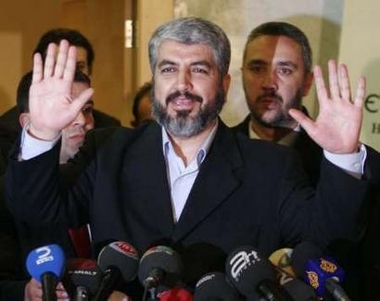 First: charles austin – “In a celebration of ecumenical diversity, Hamas will forego blowing up Jews for Lent.”

Second: The Man – We call for death to all American infidels…unless they want us to run their ports.

Third:(tie) Mark – As you can see, I still have both of my hands so the allegations that I am a crook are false!

Third:(tie) Moe Lane – Why, thank you: my wife thinks I look a little like George Clooney, too. Of course, if I find out that he’s a Jew, I’ll have to have him, her and you killed for the insult.

Ingress – Hamas leader Khaled Meshaal practices assuming the position. May come in handy down the road.

Marv – Watch carefully, now! Nothing up my sleeve. And poof, Israel is gone!

Exek – Uh-Oh These do not look like reporters to me…

In the great tradition of Yassin, and Rantisi

“No I would not like to go hunting with Dick Cheney.”

“I just want to say one thing to the American people, let me be perfectly clear, I did not have sex with that Sheep, Miss Ewe-inski.”

The Thursday contest is already chillin’ out.