The men responsible for the Charlie Hebdo massacre are dead, but the problems for France, and the rest of Europe, may just be at the beginning. 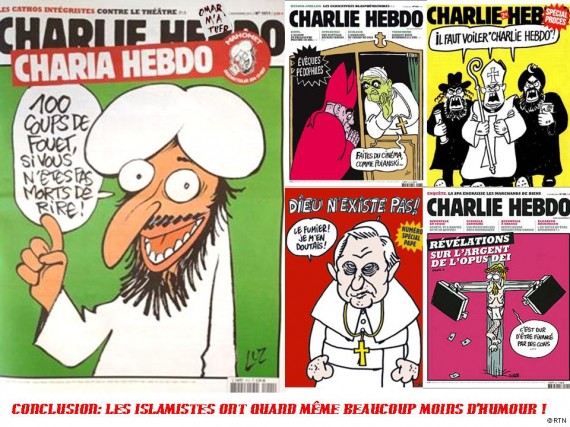 The men believed to be responsible for the massacre of twelve people at the offices of French magazine Charlie Hebdo are dead after a standoff in a town outside Paris, and an apparent confederate has also died in a separate incident at a Kosher supermarket in Paris itself:

PARIS — A tense, dramatic day of spiraling crises that had paralyzed parts of Paris and its suburbs, drawn an army of law enforcement officers and shaken the French government ended in bloodshed on Friday, as the police conducted simultaneous raids in response to two hostage situations that had extended a wave of terror.

The operations against two suspected militants in a printing factory north of Paris, and against a third man who had seized hostages at a kosher market in the eastern part of the city, began with explosions, the sound of gunfire, and then quiet.

The militants in the factory, two brothers, had set off the terror on Wednesday by spraying the offices of a satirical newspaper with gunfire, massacring 12 people. An associate was suspected of assassinating a police officer on Thursday before taking hostages at the kosher market on Friday. All three were killed in the police operations.

A hostage who had been held by the two brothers was freed unharmed, the authorities said.

But four hostages were killed and five injured at the supermarket, although it was not immediately clear how many of those might have been shot in the final assault. Five hostages were reported to have been freed unharmed, a senior French police official said.

Addressing the nation Friday night, President François Hollande saluted the special police forces that had conducted the operations. He called for vigilance and unity against “fanatics.”

“It is our best weapon,” he said. “We can fight against anything that could divide us.”

“Following this ordeal, I can assure you: We will emerge even stronger,” he said

Though the immediate crises had ended, France remained deeply traumatized, and a period of mourning began for the 17 victims who had been swept up in the violence. The attack on the satirical newspaper, Charlie Hebdo, has already been called “France’s September 11” by Le Monde.

The Kouachi brothers had been on the run since the attack on Charlie Hebdo but were tracked to the printing plant in Dammartin-en-Goële, 25 miles north of Paris, early Friday. They were armed and holding a single hostage.

After hours of unsuccessful negotiations, during which the brothers told the authorities that they were ready to die as martyrs, the police began the simultaneous raids at about 5 p.m.

Rocco Contento, a spokesman for the Unité S.G.P. police union in Paris, who confirmed that the brothers were dead, said the raids had unfolded rapidly.

“The operation in Dammartin is finished,” Mr. Contento said. “The two suspects have been killed, and the hostage has been freed. The special counterterrorism forces located where the terrorists are and broke down the door. They took them by surprise. It lasted a matter of minutes.”\

While the brothers were holding the printing plant, a man said to be an associate, Amedy Coulibaly, seized hostages at Hyper Cacher, a kosher supermarket in Porte de Vincennes.\

Mr. Coulibaly, who the police said had gunned down a female police officer in Montrouge, a suburb south of Paris, on Thursday, threatened to kill his hostages if the police attacked the Kouachi brothers.

In a measure of the jitters pervading the city during the daylong siege, the police ordered shopkeepers on Rue des Rosiers, a street with many Jewish-owned businesses, to close as a precaution.

Earlier in the day, the police said that Mr. Coulibaly was believed to be part of the same jihadist network as the Kouachi brothers, and that a terrorism investigation had been opened. While Mr. Coulibaly held the hostages, they issued a photograph of him and appealed for witnesses to come forward.

French authorities are apparently now looking for a 26 year old woman named Hayat Boumeddiene who was connected to Coulibaly and the Kouachi brothers and may indeed have been part of the network that the three men were apparently involved in. It was believed that she may have been part of the standoff at the supermarket but was able to slip away in the confusion after the siege ended. In any case, the big question going forward is just how big this network may actually have been. The connections between the Kouchi’s and al Qaeda’s affiliate in Yemen appear to be largely confirmed at this point, especially with reports this afternoon that the group has officially claimed responsibility for the attack, and  they raise several questions that the French and many other nations are going to have to deal with in coming weeks an months. For example, were these four people part of a formal al Qaeda cell in France and, if so, are they the only people involved in that cell? Were they being formally directed from Yemen or was this more of a free lance effort, a question that is all the more important given the fact that it appears that it has been at least three years since any of the parties involved have actually been in Yemen? If this was some kind of directed attack, then how were they communicating with their contact(s) in Yemen? Where did they get their weapons, and how did they get the seemingly inside information that would have been needed to know that nearly the entire staff of Charlie Hebdo would be in the office on Wednesday? Are there other attacks in the works, and are their other cells in other parts of Europe, or even the United States? Given the brazen and seemingly professional nature of the initial attack in this case, it would seem that these are questions that need to be answered as soon as possible.

In addition to those questions, though, the incident has also raised issued about France itself and its immigrant culture:

The attack on Wednesday set off soul-searching about the integration of Muslims in France’s impoverished immigrant suburbs, the radicalization of disenfranchised young people on society’s margins, and the failure of the French security apparatus to fend off the assault by the suspects, who had been known to the police for years and had been closely monitored by the intelligence services.

One of the two brothers, Saïd Kouachi, 34, had traveled to Yemen in 2011 and received terrorist training from Al Qaeda’s affiliate there before returning to France, according to American officials. His younger brother Chérif Kouachi, a sometime pizza delivery man and fishmonger, had been arrested in France in 2005 as he prepared to leave for Syria, the first leg of a trip he had hoped would take him to Iraq, and convicted three years later.

During the attack on the newspaper, the assailants identified themselves as being part of Al Qaeda and shouted, “Allahu Akbar,” or “God is great.” Their blatant embrace of Islam during an act of violence has been seized on by those who have been warning about a gulf between Islam and the values of the West.

The events are already resonating in French politics and could embolden the ascendant far-right National Front, which has railed against the failure of immigrants, and Muslims in particular, to integrate into French society.

They could further damage the standing of Mr. Hollande, one of the most unpopular presidents in recent French history, who was already confronting a struggling economy and questions about his leadership.

The attacks have also spawned fears among Muslims. In the hours after the newspaper was targeted, two Muslim places of worship were shot at, and there was an explosion at a kebab shop in eastern France. No one was hurt in those assaults.

France has long had conflict regarding its Muslim immigrant population and the nation’s long tradition of secularism, ranging from efforts to ban even traditional headscarves to what some suggest has been the general inability of French culture to fully assimilate immigrants to the extent that it makes younger members of these communities more susceptible to radicalization. That’s not to justify what happened this week, of course, but it seems undeniable that if people are meant to feel like outcasts even after living in a place for a generation or more, then it’s perhaps not surprising that they would end up being seduced by a jihadist ideology. In any case, it seems clear that this is going to be an issue that France, and other nations in Europe are going to have to deal with on their home fronts going forward. I don’t know what the solution is, but it seems imperative that some solution be found.