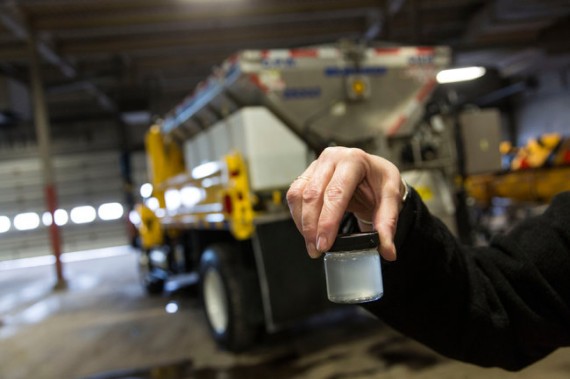 Wisconsin, which already considers cheese to be a big part of its economy, is now using the stuff to help deal with winter snow and ice:

MILWAUKEE — In a state whose license plates advertise it as America’s Dairyland, where lawmakers once honored the bacterium in Monterey Jack as the state’s official microbe and where otherwise sober citizens wear foam cheesehead hats, road crews are trying to thaw freezing Wisconsin streets with a material that smells a little like mozzarella.

This month, Milwaukee began a pilot program to repurpose cheese brine for use in keeping city roads from freezing, mixing the dairy waste with traditional rock salt as a way to trim costs and ease pollution.

“You want to use provolone or mozzarella,” said Jeffrey A. Tews, the fleet operations manager for the public works department, which has thrice spread the cheesy substance in Bay View, a neighborhood on Milwaukee’s south side. “Those have the best salt content. You have to do practically nothing to it.”

Local governments across the country have been experimenting with cheaper and environmentally friendly ways of thawing icy thoroughfares, trying everything from sugar beet juice to discarded brewery grain in an attempt to limit the use of road salt, which can spread too thin, wash away and pollute waterways.

Snow science experts say an attempt to recycle the salty brine that flavors cheese was only a matter of time, particularly in a state like Wisconsin.

“We’re just trying to make every possible use of cheese,” said Tony Zielinski, an alderman who represents the Bay View district, adding that local governments in other states have called him to learn more about the program. “If this takes off, if this proves to be a success here, I’m sure that it will be used in cities all over the country.”

But in this dense urban setting, Milwaukee officials are reviewing a list of potential problems that come with cheese-coated streets: Would a faint odor of cheese bother residents? Would it attract rodents? Would the benefits of cheese brine, said to freeze at a lower temperature than regular salt brine, be enough to justify the additional hauling and storing requirements?

If at first it sounded like a joke, the reality of tapping the wellspring of dairy byproduct has become a serious budget-slimming conversation. The state produced 2.7 billion pounds of cheese in 2012, the most of any in the nation. With it comes a surplus of brine that is shipped to local waste treatment plants. (Cheese brine is permitted on roads if limited to eight gallons per ton of rock salt used.)

Chuck Engdahl, the wastewater manager at F & A Dairy Products in northwestern Wisconsin, said his company now donates most of the excess liquid to a handful of municipalities willing to cart it away, including Milwaukee, saving about $20,000 a year in hauling costs.

And Polk County, also near the Minnesota border, estimates that it saved $40,000 in rock salt expenses in 2009, the year it started using cheese brine on its highways.

“If you put dry salt on a roadway, you typically lose 30 percent to bounce and traffic,” said Emil Norby, who works for Polk County and was the first in Wisconsin to come up with the cheese brine idea to help the salt stick. The county has expanded its use of the material every year since, spreading more than 40,000 gallons on its highways last year. Chehalis, in Washington State, also uses an anti-icing mixture that includes cheese brine.

Looking for rock salt alternatives, Milwaukee, a city that averages about 50 inches of snow each winter, tested a “molasses-type product” more than a decade ago, but scrapped the idea after residents complained that it left shoe prints in their homes. In 2009, the city sprayed its rock salt with sugar beet juice to make it last longer, but the mixture clogged trucks and was eventually dropped.

The Atlantic’s Stephanie Gordon has more, including some of the drawbacks:

It turns out that the cheese brine may work better than some traditional de-icing agents. It has a lower freezing point of 21 below zero, while regular salt brine freezes at 6 below. When added to normal rock salt, cheese brine also worked wonders as a “pre-wetting” agent, helping make sure the salt doesn’t bounce off the road and go to waste. It was so effective that Polk County officials said they used 30 percent less road salt than usual during that first year.

Intrigued by the success of these smaller counties, Milwaukee’s Department of Public Works has signed off on a pilot program to use cheese brine this winter. After failed attempts to use molasses (too smelly and messy) and beet juice (it looked like oatmeal), officials are launching a $6,500 cheese pilot.

One unanswered question is the environmental impact of dumping untreated cheese brine — stuff that, normally, undergoes an extensive disposal processing — right onto the roadways.

Rock salt, far and away the most effective de-icer, has been fingered as a major pollutant of urban waterways. Cheese brine itself is fairly salty — more than 25 percent for “fully saturated” brine — so it’s bound to have some of the same effects. And the impact of some of the other components on the water supply are still unclear. The brine is strained before it’s spread on the road, but fine organic components are left behind. The breakdown of these compounds can disrupt local waterways by rapidly altering their bacteria levels and, as a result, vastly lowering the oxygen levels available for other organisms.

Even independent of this uncertain environmental impact, there’s already one very obvious downside to what most are hailing as a total win-win: the stench. What Wisconsin has really done is spread huge amounts of tiny pieces of organic matter, and the scent of rotting cheese will soon be wafting up from the winter roadways. Imagine your dirty winter car covered in the stuff. Pleasant.

Well, there could be worse alternative odors I suppose.

FILED UNDER: Economics and Business, Minnesota, The Atlantic, Wisconsin

The Most Unessential Man in America