The world oil markets aren't too far away from being hit by the shock of massively increased demand from China. Somehow, we'll have to adapt. 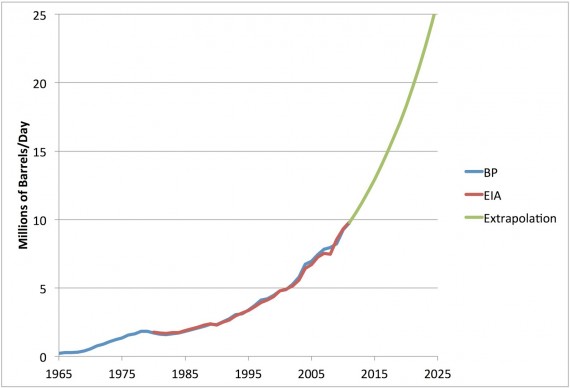 One of the major factors that has been driving the price of oil in recent years, outside of political issues in the Middle East, has been China’s increasing demand for oil, something which has been an important by product of the nation’s increased industrialization and the acquisition of wealth by average citizens. The chart above was developed by a blogger named Stuart Staniford and projects Chinese demand for oil through 2025 with the assumption that demand will continue to grow at the same 7% rate it’s been averaging in the past. His commentary follows:

That’s another 15mbd in the next thirteen years or so.  Just for China.  If you compare this to things like the extra 4mbd you might hope for from tar sands in this time frame, or the 2mbd that global crude supply has increased since 2005, you can see that this is going to stress the global oil system a lot.  Either the global crude supply is going to grow a lot faster than it has been, or OECD oil consumers are going to have to consume a great deal less than they are now, or China (and other rapidly growing consumers) are going to have to slow down a lot.

Whichever is the case, it’s hard to see how any combination of the above happens on the necessary scale without prices a lot higher than the $100-$120 we’ve been paying in the last few years.  The comparative truce in the oil markets during 2009-2013 seems like it cannot last forever.

Shale oil and tar sands are simply nowhere near big enough to keep up with this. From a climate change perspective, that’s a good thing. From a global economic perspective, it’s not so good. It means that demand for oil is now permanently pushing up against supply, and will be moderated in the future primarily by oil price spikes produced when economic expansions drive oil demand above supply constraints, thus producing global recessions.

There are several cavaeats here, of course. The first being that it may not be true that Chinese demand for oil will continue increasing in the future at the same rate that it has in the past. Though unlikely, the Chinese could decide to embark on a clean energy strategy in response to the appalling environmental conditions that rapid industrialization has created in many of China’s major cities, most especially Beijing. Given the fact that the government has been pursuing the same economic strategy for some 30 years now, and that it really doesn’t have to worry about being responsive to public opinion, though, it seems unlikely that we’ll see a major change in Chinese energy policy anytime soon. If demand for energy does decline in China, then, it’s likely to be a result of a slowdown in the Chinese economy in much the same way that worldwide oil prices plummeted precipitously in the wake of the 2008 financial crisis. If that happens, then we’re likely to avoid the worst impacts of massive Chinese demand for at least some period of time.

The impact of demand from China following the trajectory of the chart above, though, is pretty clear. Increased demand without an increase in supply will mean increased prices, wildly far beyond the worst that we’ve seen in recent years. It may also lead to increased international tensions as nations take it upon themselves to secure routes of supply, as well as creating an opportunity for terrorists and rogue nations to create chaos by disrupting supply at key chokepoints, which would likely send prices soaring even higher. That’s why things like the Tar Sands revolution in North Dakota and Canada, and the increased use of natural gas as an alternative to oil are so important. It’s also why you’re likely to start hearing a lot more about something called methane hydrate may end up being a solution to many of our energy problems:

In the 1970s, geologists discovered crystalline natural gas—methane hydrate, in the jargon—beneath the seafloor. Stored mostly in broad, shallow layers on continental margins, methane hydrate exists in immense quantities; by some estimates, it is twice as abundant as all other fossil fuels combined. Despite its plenitude, gas hydrate was long subject to petroleum-industry skepticism. These deposits—water molecules laced into frigid cages that trap “guest molecules” of natural gas—are strikingly unlike conventional energy reserves. Ice you can set on fire! Who could take it seriously? But as petroleum prices soared, undersea-drilling technology improved, and geological surveys accumulated, interest rose around the world. The U.S. Department of Energy has been funding a methane-hydrate research program since 1982.

If methane hydrate allows much of the world to switch from oil to gas, the conversion would undermine governments that depend on oil revenues, especially petro-autocracies like Russia, Iran, Venezuela, Iraq, Kuwait, and Saudi Arabia. Unless oil states are exceptionally well run, a gush of petroleum revenues can actually weaken their economies by crowding out other business. Worse, most oil nations are so corrupt that social scientists argue over whether there is an inherent bond—a “resource curse”—between big petroleum deposits and political malfeasance. It seems safe to say that few Americans would be upset if a plunge in demand eliminated these countries’ hold over the U.S. economy. But those same people might not relish the global instability—a belt of financial and political turmoil from Venezuela to Turkmenistan—that their collapse could well unleash.

On a broader level still, cheap, plentiful natural gas throws a wrench into efforts to combat climate change. Avoiding the worst effects of climate change, scientists increasingly believe, will require “a complete phase-out of carbon emissions … over 50 years,” in the words of one widely touted scientific estimate that appeared in January. A big, necessary step toward that goal is moving away from coal, still the second-most-important energy source worldwide. Natural gas burns so much cleaner than coal that converting power plants from coal to gas—a switch promoted by the deluge of gas from fracking—has already reduced U.S. greenhouse-gas emissions to their lowest levels since Newt Gingrich’s heyday

I’d recommend reading the entire article at the link above, because it is quite fascinating, and the potential for methane hydrate to remake the world’s energy markets, and in some sense its political makeup, is quite high. If nothing else, increasing demand from China, and at some point it’s equally heavily populated neighbor India, is going to require that the energy market adapt somehow. Extracting methane hydrate from the ocean floor may be the way to do it.