On his return to Washington after concluding a week-long visit to several Asian countries although, notably, not China, President Obama summed up the diplomatic tour with a sports metaphor:

The Asia trip didn’t produce a blockbuster trade deal, or bring an end to North Korea’s nuclear threat. The U.S. won a smaller-scale agreement to station military forces in the Philippines. And it polished its newfound ties with Malaysia. This is the kind of workaday diplomacy that President Obama says is not sexy but pays off in the long run.

“That may not always attract a lot of attention, and it doesn’t make for good argument on Sunday morning shows. But it avoids errors. You hit singles; you hit doubles. Every once in a while we may be able to hit a home run. But we steadily advance the interests of the American people and our partnership with folks around the world.”

The punditry has reacted to the president’s formulation with a certain amount of dismay. Maureen Dowd whinges:

Mr. President, I am just trying to get my paragraph right. You need to think bigger.

An American president should never say, as you did Monday in Manila when you got frustrated in a press conference with the Philippine president: “You hit singles; you hit doubles. Every once in a while, we may be able to hit a home run.”

Especially now that we have this scary World War III vibe with the Russians, we expect the president, especially one who ran as Babe Ruth, to hit home runs.

The concept that should inform American foreign policy is one that the Obama administration proposed in its first term: the pivot or rebalancing toward Asia, with decreasing emphasis on the Middle East. What has been missing is the commitment and discipline to implement this change in policy. President Obama’s four-country Asian tour in recent days was a start, but it hardly made up for years of paying little heed to his own professed foreign-policy goals.

I think the president has selected the wrong sports metaphor. Batting is the epitome of individual performance within the context of a team sport. You can bat .400 only batting singles. That might be enough to get you into the Hall of Fame but it won’t necessarily win ballgames because baseball is a team sport. Winning baseball games requires more than hitting singles and avoiding errors. It takes pitching, fundamentals, and, as Earl Weaver noted, hitting an occasional three-run homer.

A better metaphor for gradual progress towards victory might be from football: “Three yards and a cloud of dust.” The question then becomes, as Mr. Haass points out, to what end? Running out the clock?

Most presidents don’t select foreign policy. It happens to them and, frequently, overwhelms their other objectives including those they ran on. That is the nature of the job.

Launching into my own avalanche of sports metaphors, it’s the president’s football. If he believes that the best way for the U. S. to make its way in the world is by his hitting singles, that’s his choice. That, too, is the nature of the job. Having inherited most of his foreign policy problems from his predecessor who inherited most of his from his predecessor and so on, in two years he will turn most of the problems he inherited over to his successor whoever he or she might be who will ultimately turn them over to his or her successor, etc.

In the memorable words of Yogi Berra, the game ain’t over ’til it’s over and, unlike baseball, the game of foreign policy is never over. 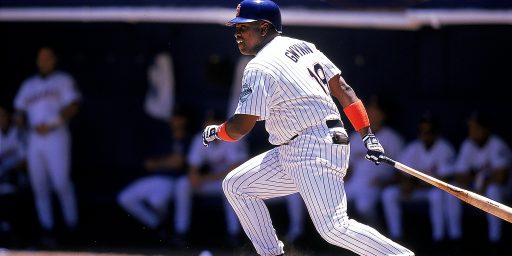