Coburn, McCaskill Introduce “Let Me Google That For You” Bill 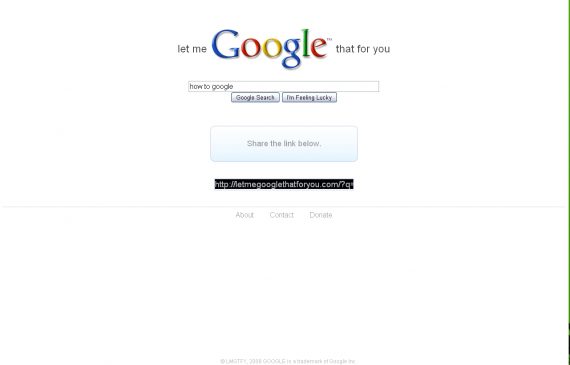 Senators Tom Coburn and Claire McCaskill have taken inspiration from a popular snarky web search tool for their newest piece of bipartisan legislation:

Sen. Tom Coburn (R-OK) and Sen. Claire McCaskill (D-MO) introduced a new bill this week called the Let Me Google That For You Act of 2014 (seriously).

The bill is meant to cut down on “the collection and distribution of government information” by prioritizing using Google over spending money to obtain information from the National Technical Information Service (NTIS).

NTIS, run by the Department of Commerce, is a repository of 3 million scientific, technical, engineering, and business texts.

The bill would abolish the NTIS and move essential functions of the agency to other agencies like the National Archives. The bill’s name is a play on a snarky website that links to Google’s search engine.

“No Federal agency should use taxpayer dollars to purchase a report from the National Technical Information Service that is available through the Internet for free,” the bill reads.

It’s likely a small amount of money involved here, but it is exceedingly stupid for anyone to pay for something you can get on the Internet for free.