While most of America slept, the government was shutdown thanks to some faux theatrics by a single Senator. 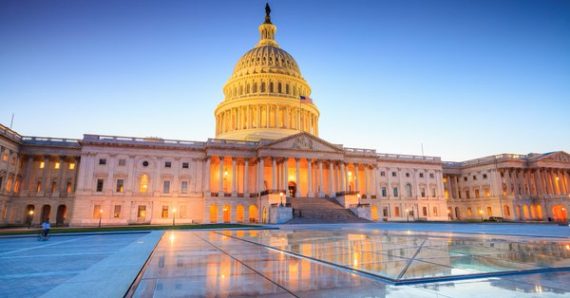 As James Joyner notes, early this morning, while most of America was either asleep or, for you West Coast people and people in Hawaii, just going to bed, Congress approved the budget deal that had been put forward yesterday. What they were unable to do, though, is avoid a government shutdown. Rather than passing the spending bill sometime yesterday afternoon so that it could get to the House in time to avert a shutdown, the Senate was forced to wait until nearly 2;00 am this morning to hold a vote because Kentucky Senator Rand Paul refused to give consent to proceed to a vote rather than using the full amount of debate time called for under Senate rules. Because of that, the clock ticked past midnight and the government was technically shut down for roughly five and a half hours while Senators, Members of Congress, their clerks and staff, reporters, and insomniacs waited for the inevitable of the faux drama that Paul’s stunt caused:

WASHINGTON — The House gave final approval early Friday to a far-reaching budget deal that will reopen the federal government and boost spending by hundreds of billions of dollars, hours after a one-man blockade by Senator Rand Paul of Kentucky delayed the votes and forced the government to close.

House Democrats, after threatening to bring the bill down because it did nothing to protect young undocumented immigrants, gave Speaker Paul D. Ryan of Wisconsin the votes he did not have in his own party and ensured passage. In the end, 73 House Democrats voted yes to more than offset the 67 Republicans who voted no.

Just before the vote, Mr. Ryan voiced support for bringing a debate on immigration to the House floor — though he did not make a concrete promise, as Democratic leaders had wanted.

With the House’s approval, before dawn and the start of Friday’s workday, and President Trump’s expected signature, the government will reopen before many Americans knew it had closed, with a deal that includes about $300 billion in additional funds over two years for military and nonmilitary programs, almost $90 billion in disaster relief in response to last year’s hurricanes and wildfires, and a higher statutory debt ceiling.

It should pave the way for a measure of stability through September 2019 after months of lurching from fiscal crisis to fiscal crisis. Mr. Trump will get to boast of a huge increase in military spending, long promised, but his desire to more broadly reorder the government with deep cuts to programs like environmental protection, health research and foreign aid are dead for now — as is any semblance of fiscal austerity.

Mr. Paul, a Republican, made that final point. Angered at the huge spending increases at the center of the accord, he delayed passage for hours with a demand to vote on an amendment that would have kept in place the strict caps on spending that the deal raises.

“The reason I’m here tonight is to put people on the spot,” Mr. Paul said Thursday night. “I want people to feel uncomfortable. I want them to have to answer people at home who said, ‘How come you were against President Obama’s deficits and then how come you’re for Republican deficits?'”

The shutdown came on the heels of a three-day closure brought about by Senate Democrats last month. As midnight approached, Mr. Paul did not relent, bemoaning from the Senate floor what he saw as out-of-control government spending and repeatedly rebuffing attempts by his fellow senators to move ahead with a vote.

“I think the country’s worth a debate until 3 in the morning, frankly,” he said.

“I think it’s irresponsible,” said Senator John Cornyn of Texas, the No. 2 Senate Republican, lamenting what he described as “the act of a single senator who just is trying to make a point but doesn’t really care too much about who he inconveniences.”

Mr. Paul’s ideological opponents were not buying his fiscal rectitude either. Senator Brian Schatz, Democrat of Hawaii, posted on Twitter: “Rand Paul voted for a tax bill that blew a $1.5 trillion hole in the budget. Now he is shutting the government down for three hours because of the debt. The chance to demonstrate fiscal discipline was on the tax vote. Delaying a vote isn’t a profile in courage, it’s a cleanup.”

Technically, the bill that was passed this morning is not the two-year budget deal that was announced yesterday. Instead what we got was a Continuing Resolution that keeps the government funded for the next month and a half, through March 22nd. During that time, the House and Senate will work through the details of the bill that will basically serve as the blueprint for funding the government through the end of Fiscal Year 2019, which ends on September 20th, 2019. Given the outcome of the votes this morning, though, it seems apparent that the final bill, along with whatever additional measures will be necessary later in the year, will pass easily. In the meantime, in addition to funding the government through late March, though, the Continuing Resolution appears to also include fully fund the defense budget through the end of the current Fiscal Year, as well as further extending funding for the CHIP program and a number of other smaller items. The CR is necessary mostly because there wasn’t sufficient time to put the entire two-year deal in the appropriate legislative language. As I said, though, the passage of that much larger bill will likely end up being a mere formality as the deal has been made and the votes will be there to pass it when the time comes.

As I noted in yesterday’s post about the deal itself, I largely agree with Senator Paul’s criticisms of the budget deal. By massively increasing spending on defense, social programs, and a whole host of other programs that seem designed primarily to please constituencies on both sides of the political aisle, this deal is nothing more than an exercise in exactly the kind of profligacy that Republicans claimed to be against during the eight-years of the Obama Presidency. In that respect, Paul is absolutely correct to call out the hypocrisy of his own party and perhaps even deserves some credit for bringing it public attention during a speech on the Senate floor that ran during prime time viewing hours and was covered for a significant amount of time by all three cable news cameras. At the same time, though, there was something utterly pointless about Paul’s stunt that was apparent even as it was unfolding.

For one thing, Paul’s refusal to grant consent to proceed to the vote was never going to put passage of the bill in the Senate in doubt, all it did was delay the inevitable. Paul was able to get himself in the news, though, simply because he refused to grant consent to proceed to a vote on the spending bill, which as I said above meant that the Senate had to use up all of the time for debate on the bill called for under Senate rules. He knew this going in, of course, but proceeded forward anyway. Even taking him at his word that he truly is concerned about fiscal responsibility, his actions really didn’t accomplish anything other than making everyone on Capitol Building stay up through the wee small hours of the morning to get a job done that could have been done before midnight last night. I’m sure Paul thought there was a point to all that, but I can’t see what it really was.

Additionally, as several people pointed out as the “drama” unfolded overnight and into the morning, Paul’s words about fiscal responsibility in connection with this bill ring somewhat hollow given his own recent votes. Specifically, of course, I’m referring to Paul’s support for the Republican tax cut bill that passed in December. As I’ve noted before, the Congressional Budget Office and other independent analysts have projected that, even under the most optimistic of economic scenarios, this tax cut will add some $1.5 trillion to deficits over the next ten years. If the economy falters or performs worse than expected during that period, then the amount of additional debt will likely be much larger. If Paul were truly concerned about fiscal responsibility then one wonders why he didn’t insist on spending cuts to offset the deficit increases that the tax bill would create. When he was asked about this during the standoff last night, Paul gave what amounts to a nonsensical answer that basically boils down to the fact that he likes tax cuts regardless of whether or not they add to the deficit and that he only seems to care about fiscal responsibility when there’s a spending bill on the table. While he was correct last night to point out the hypocrisy of many members of his own party, Paul has some hypocrisy of his own that he should have to answer for.

In any case, with the spending bill passed on its way to the President for signature, this would seem to be the end of the second Federal Government shutdown of 2018, which ended up being one of the shortest, if not the shortest, in American history. What was the point of it all? Nothing, absolutely nothing.

Update: President Trump signed the bill shortly after 8:30 am this morning.