Congress, The President, And War Powers Under The Constitution

Operation Odyssey Dawn has resurrected the eternal battle over what limits there are, and should be, on the President's ability to use military force without Congressional authorization. 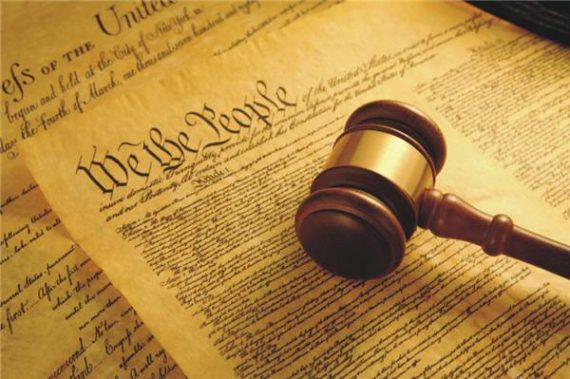 Over the past 48 hours, there’s been much commentary about President Obama’s failure to obtain Congressional approval for American involvement in the actions against Libya to enforce UNSCR 1973 on both sides of the political aisle. Some Democrats in Congress were quick to speak out against the President’s decision, which they said he lacked legal authority to make:

A hard-core group of liberal House Democrats is questioning the constitutionality of U.S. missile strikes against Libya, with one lawmaker raising the prospect of impeachment during a Democratic Caucus conference call on Saturday.

Kucinich, who wanted to bring impeachment articles against both former President George W. Bush and Vice President Dick Cheney over Iraq — only to be blocked by his own leadership — asked why the U.S. missile strikes aren’t impeachable offenses….

Saturday’s conference call was organized by Rep. John Larson (Conn.), chairman of the Democratic Caucus and the fourth-highest ranking party leader. Larson has called for Obama to seek congressional approval before committing the United States to any anti-Qadhafi military operation.

These liberal Democrats have been joined in their position by Republicans ranging from Richard Lugar to National Review’s Andrew McCarthy who wrote yesterday:

The Security Council is powerless to “authorize” the U.S. military to do a damned thing. The validity of American combat operations is a matter of American law, and that means Congress must authorize them.

Our Constitution vests Congress with the power to declare war. That authority cannot be delegated to an international tribunal that lacks political accountability to the American people. The decision to go to war is the most significant one a body politic can make. Thus the Framers designed our system to make certain that the responsible officials are answerable to the people whose lives are at stake and who are expected to foot the bills.

As McCarthy goes on to note, of course, that there are exceptions for departing from this requirement, but they have been clear, well-defined, and well within the President’s duties as Commander in Chief:

Article I of the Constitution clearly gives Congress, not the president, the “power… to declare War.” The Founding Fathers sought to avoid a situation where one man had the power to commit the nation to war on his own initiative.

It’s arguable that some small-scale uses of force don’t rise to the level of a war and therefore can be undertaken by the president acting alone under his authority as commander-in-chief of the armed forces. President Reagan’s 1986 airstrike on Libya might be an example, as were Bill Clinton’s 1998 missile strikes against Al Qaeda base camps in Afghanistan. If all the Obama administration intends is to launch a few Tomahawk missiles, perhaps this action would fall in the same category. However, it seems highly likely that the president plans to go well beyond this. Military operations are likely to continue for some time, perhaps until Gaddafi has either been overthrown or at least compelled to leave the rebel-controlled parts of Libya unmolested. If so, it seems quite clear that congressional authorization for military action on that scale is required.

Congressional authorization also might not be needed if all the president is responding to an ongoing or imminent attack. However, Gaddafi has not attacked the US in recent years (though he did sponsor numerous anti-American terrorist attacks in the 1980s and early 90s) and there doesn’t seem to be any evidence that he had any immediate intention of doing so.

Neither McCarthy nor Somin mention, however, the War Powers Act, which was passed in the wake of the Vietnam War in an effort to reign in Presidential war power, but which actually enhances that power greatly and gives the President the ability to commit U.S. military forces without seeking Congressional approval under a wide variety of circumstances. As summarized by Wikipedia, the Act “requires the president to notify Congress within 48 hours of committing armed forces to military action and forbids armed forces from remaining for more than 60 days, with a further 30 day withdrawal period, without an authorization of the use of military force or a declaration of war.” The advantages to the President here seem obvious. As long as he notifies Congress, the President has the legal authority to engage in virtually any military action he desires. If that action is still ongoing 90 days later, then Congress is left with the option of cutting off funding to troops in the field after they’ve already been committed — and if a President refused to withdraw troops does anyone really believe that any Court anywhere would require him to do it? President’s since Richard Nixon have argued that the WPA is unconstitutional because it unduly restricts the President’s powers as Commander In Chief, In reality, it seems that there is a strong argument that the act is unconstitutional because it delegates too much of Congressional war power to the Executive Branch.

It’s easy to see why Presidents would like the present state of affairs. After all, foreign policy, and especially the use of military force, is the one area where they have the most authority to begin with, and accumulating more power in that area allows them to act unilaterally and be, well, “Presidential,” if by Presidential you mean someone who orders the military to go in and blow things up without waiting around for Congress.

As Matthew Yglesias notes, however, Congress has simply stood by and let Presidents take this power because they don’t want to exercise it:

The one observation I would make about this, is that while the trend toward undeclared military incursions is often described as a kind of presidential “power grab” it’s much more accurately described as a congressional abdication of responsibility. Even if you completely leave the declaration of war business aside, congress’ control over the purse strings still gives a determined congressional majority ample latitude to restrain presidential foreign policy. The main reason congress tends, in practice, not to use this authority is that congress rarely wants to. Congressional Democrats didn’t block the “surge” in Iraq, congressional Republicans didn’t block the air war in Kosovo, etc. And for congress, it’s quite convenient to be able to duck these issues. Handling Libya this way means that those members of congress who want to go on cable and complain about the president’s conduct are free to do so, but those who don’t want to talk about Libya can say nothing or stay vague. Nobody’s forced to take a vote that may look bad in retrospect, and nobody in congress needs to take responsibility for the success or failure of the mission. If things work out well in Libya, John McCain will say he presciently urged the White House to act. If things work out poorly in Libya, McCain will say he consistently criticized the White House’s fecklessness. Nobody needs to face a binary “I endorse what Obama’s doing / I oppose what Obama’s doing” choice.

The other important point, of course, is that what the Constitution says about war powers at this point is largely irrelevant, what matters is nearly 200 years of tradition and history, during which Presidential authority to engage in military action without getting direct Congressional approval has gradually, but incessantly, expanded. It started in 1801 when Thomas Jefferson essentially declared war on the Barbary States (located, ironically enough, in what we now call Libya) for their piracy against American military and merchant vessels. In that instance, Jefferson did inform Congress of his actions, and they did issue what some might call an authorization for the use of force against the pirates. Later, in the 20th Century, Presidents sent forces of various sizes of Latin American nations such as Nicaragua to put down rebellions or maintain control. Then, once the Cold War started, the instances of unilateral action by the President increased exponentially, starting with the Korean War, a three-year long engagement that was never directly authorized by the United States Congress. And, of course, its worth noting that the bloodiest conflict in American history was an undeclared war.

There are plenty of reasons to be concerned about the fact that we’ve strayed so far from the intended separation of powers when it comes to the power to make war. However, we are not just talking about a situation where President’s have grabbed power. This has been a willful abdication by a Congress that doesn’t want to get its hands dirty in the foreign policy arena, and doesn’t want to take responsibility for the decisions that they should be making in that area. They ought to be ashamed of themselves.