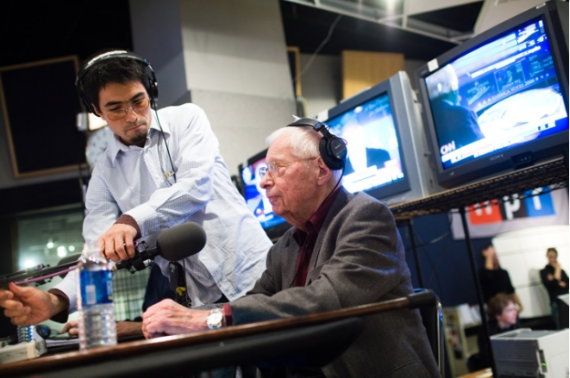 Veteran journalist Daniel Schorr died this morning at the age of 93.

Daniel Schorr, a longtime senior news analyst for NPR and a veteran Washington journalist who broke major stories at home and abroad during the Cold War and Watergate, has died. He was 93.

Schorr, who once described himself as a “living history book,” passed away Friday morning at a Washington hospital. His family did not provide a cause of death.

As a journalist, Schorr was able to bring to contemporary news commentary a deep sense of how governmental institutions and players operate, as well as the perspective gained from decades of watching history upfront.

“He could compare presidents from Eisenhower on through, and that gave him historical context for things,” said Donald A. Ritchie, Senate historian and author of a book about the Washington press corps. “He had lived it, he had worked it and he had absorbed it. That added a layer to his broadcasting that was hard for somebody his junior to match.”

Schorr’s 20-year career as a foreign correspondent began in 1946. After serving in U.S. Army intelligence during World War II, he began writing from Western Europe for the Christian Science Monitor and later The New York Times, witnessing postwar reconstruction, the Marshall Plan and the creation of the NATO alliance.

Schorr joined CBS News in 1953 as one of “Murrow’s boys,” the celebrated news team put together by Edward R. Murrow. He reopened the network’s Moscow bureau, which had been shuttered by Joseph Stalin in 1947. Ten years later, Schorr scored an exclusive broadcast interview with Nikita Khrushchev, the U.S.S.R. Communist Party chief — the first-ever with a Soviet leader. Schorr was barred from the U.S.S.R. later that year after repeatedly defying Soviet censors.

He covered the building of the Berlin Wall as CBS bureau chief for Germany and Western Europe. In 1962, he aired a celebrated portrait of citizens living under Communist rule in East Germany.

He was reassigned to Washington in 1966. Other reporters in the bureau were already covering major institutions such as Congress or the State Department, so Schorr assigned himself to cover the implementation of President Johnson’s Great Society programs.

“No one had such a beat,” recalled his bureau colleague Roger Mudd. “He was everywhere. He had almost carte blanche to cover Washington.”

Schorr was surprised to find himself on the so-called Enemies List that had been drawn up by Richard Nixon’s White House when he read it on the air. The list — naming hundreds of political opponents, entertainers and publications considered hostile to the administration — became the basis for one of the charges of impeachment against Nixon.

Schorr, along with some other members of the list, counted his inclusion on it as his greatest achievement.

Schorr won Emmys in each of the Watergate years of 1972, 1973 and 1974. Over the course of his long career, he was honored with numerous other decorations and awards, including a Peabody for “a lifetime of uncompromising reporting of the highest integrity.” Schorr was inducted into the Hall of Fame of the Society of Professional Journalists.

“He was sophisticated about the government and how it works,” Mudd said. “He was a damned vacuum cleaner, is what he was.”

Mr. Schorr, a protégé of Edward R. Murrow at CBS News, initially made his mark at CBS as a foreign correspondent, most notably in the Soviet Union. He opened the network’s Moscow bureau in 1955 and became well enough acquainted with the Soviet leader Nikita S. Khrushchev — whom he called “the most fascinating person I ever met” — to secure for “Face the Nation” the first television interview for which Khrushchev ever sat. (He had never even done one for Soviet television.) At the end of 1957 Mr. Schorr went home for the holidays and was denied readmission to the Soviet Union.

His 23-year career at CBS was cut short in 1976 when, in what Mr. Schorr later called “the most tumultuous experience of my career,” he obtained a copy of a suppressed House of Representatives committee report on highly dubious activities by the Central Intelligence Agency.

He showed a draft on television and discussed its contents, but when neither of CBS’s book subsidiaries was willing to publish the document, produced by the House Select Committee on Intelligence under Otis G. Pike, a New York Democrat, Mr. Schorr provided it — anonymously, he vainly hoped — to The Village Voice.

This led to threats requiring police protection, to investigations by the Federal Bureau of Investigation and Congress, and to Mr. Schorr’s being relieved of reporting duty. Although editorial and public opinion subsequently swung in his favor and Mr. Schorr, who came to be seen as a beleaguered reporter defending a principle, became a popular speaker on the lecture circuit, what he called his “love-hate affair” with CBS News was ended.

A quarter-century later he mused: “Washed away by one controversial leak too many? Undone by a reporting style that proved indigestible to a network worried about affiliates and regulations? Unable to adapt myself to corporate tugs on the reins? Unwilling to exempt my own network from my investigative reporting?” His conclusion: “All of that, I guess.”

At 60, with no thought of retirement, Mr. Schorr endured a brief and disappointing stint as a journalism professor at the University of California, Berkeley — he found the students most interested in his celebrity — and became a freelance lecturer and writer. The Des Moines Register and Tribune engaged him to write a column, but it was apparently not provocative enough, and after two years the paper’s syndicate did not renew his contract.

Then, after he narrated some public television specials and offered twice-a-week commentaries for the Independent Television News Association, an executive of the association introduced him in 1979 to Ted Turner, the swashbuckling Southerner who was in the process of creating CNN, the first cable news network.

Eventually, however, Mr. Schorr and Mr. Turner fell out over a CNN plan to team John Connally, the former Texas governor and Nixon Treasury secretary, with Mr. Schorr as commentators at the 1984 Republican National Convention in Dallas.

It was improper, Mr. Schorr said, to mix a politician with a journalist, and he invoked for the first time the 1979 agreement allowing him to veto assignments. The network asked him to drop that right in early 1985, and when he refused, he was told to take leave until his contract expired that May. Shortly thereafter he joined NPR as a commentator, a position he held until his death.

His Wikipedia entry has him entering journalism at the tender age of 12, when he reported the death of a woman who’d either jumped or fallen to her death from the top of his apartment building.  He never really left it, aside from a stint as an Army intelligence officer during WWII.  Unlike Helen Thomas, who stayed in the game long enough to ruin a once sterling reputation, Schorr remained a valuable contributor right up until the end.

It’s beyond cliche to say that we’ll never see another of his kind again but he’s simply cut from a different cloth than modern journalists who have, since at least the days of Watergate, very much wanted to be part of the story.    Schorr, by contrast, became part of the story — indeed, of the Watergate story — and very much shied away from it.