A victory for the GOP Establishment in Georgia. 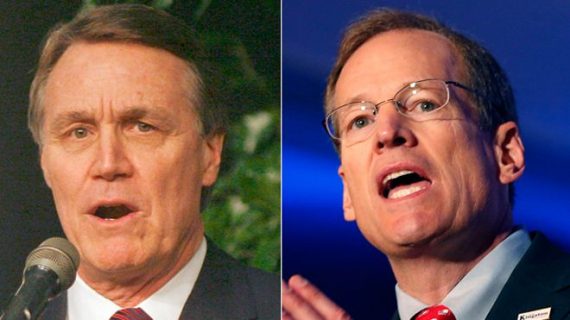 With five significant candidates in the race, it was inevitable that the race for the Republican nomination to replace Saxby Chambliss in the Senate would head to a runoff, the only question was who the top two candidates would be when the dust settled. As I noted when I wrote about this race earlier, polling had mostly shown businessman David Perdue and Congressman Jack Kingston as the top two candidates, but recent polling had shown former Secretary of State Karen Handel seemed to start to surge, suggesting she could knock Kingston out of second place. Since Handel had won statewide before and had at least some support from Tea Party groups, along with endorsements from conservatives such as Sarah Palin, In the end, though, the polls turned out to be correct and Perdue and Kingston came out on top:

The two Republicans finished atop a seven-way Republican primary field that also included Karen Handel and Reps. Paul Broun and Phil Gingrey. The Associated Press called the race for Mr. Perdue, who received 30% of the vote, and Mr. Kingston, who received 26%, with 87% of precincts reporting results.

Karen Handel, a former Georgia secretary of state who was endorsed by Sarah Palin, placed third with 22% of the vote.

The winner of the July 22 runoff will face Michelle Nunn, who sailed to the Democratic nomination on Tuesday with nominal opposition. Democrats hope that they can boost minority turnout in Georgia in order to pick up the Senate seat and to counteract potential losses in other conservative states. Democrats currently hold a majority of seats in the Senate.

Republican Party leaders and their business allies were pleased by the outcome of the Republican primary. They had feared—and Democrats had hoped—that two other candidates, Reps. Broun and Gingrey, would advance to the runoff. Both had tried to appeal to the most conservative voters.

Mr. Broun, for example, once called evolution “lies from the pit of hell.” Democrats believed that he and Mr. Gingrey would be less successful general-election candidates than Messrs. Perdue and Kingston.

The U.S. Chamber of Commerce backed Mr. Kingston, and Mr. Perdue, who served as a senior executive at Reebok International Ltd. and chief executive of Dollar General Corp., successfully cast himself as a political outsider who would shake up Washington.

I’m not going to hazard a guess as to who the frontrunner in a Perdue-Kingston matchup might be. Kingston’s support from groups like the Chamber of Commerce will be very helpful to him over the next two months, and he’s also more likely than Perdue to pick up support from conservatives who were backing candidates like Handel, Broun, and Gingrey up until now. Perdue, on the other hand has access to a personal fortune and a campaign message as an outsider that has quite obviously served him well. In the long run, either one of these candidates strikes me as a good candidate for the Georgia GOP against a political neophyte like Michelle Nunn, especially in a midterm election year that it is likely to favor Republicans. Handel would have been a good candidate as well. In the end, the best hope for Democrats here would have been if Broun or Gingrey had somehow caught fire and made it into the runoff. With opponents like Perdue or Kingston, it’s going to be a lot harder to turn that Senate seat blue this year and, for now at least, I’d keep it in the GOP camp unless we start seeing poll results that suggest otherwise.

To the extent that there’s a story here, it is as yet another chapter in the “establishment” v. Tea Party battle that has defined much of the 2014 primary season. Perdue and Kingston were both candidates supported largely be mainline conservatives, business interests, and other groups typically identified with the so-called “Republican establishment.” Handel, Broun, and Gingrey, meanwhile, were the candidates of the Tea Party and the conservative wing of the Republican Party. While the “battle” meme was not quite as pronounced in Georgia as it has been in Republican primaries in other parts of the country, the fact remains that this was yet another battle in which the candidates vetted by the “establishment” have come out victorious. What that means for the future of the GOP I’ll leave for others to ponder, but it strikes me that 2014 may well see the end of the Tea Party, at least to the extent of its grassroots using the primary process to push candidates that the GOP’s professional political class would prefer not to see at the top of the ticket. Going forward, that fact alone could have a significant impact on the race for the GOP nomination in 2016.