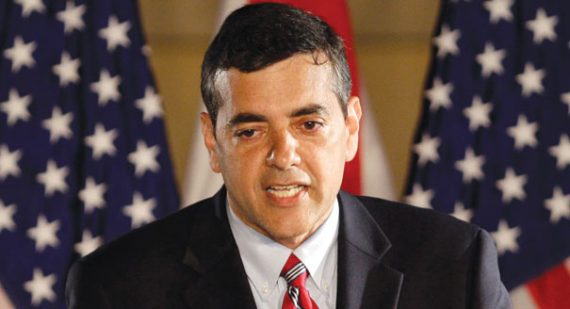 Rivera faces allegations that he failed to disclose loans from a company owned by his mother. | AP Photo

Just three weeks into his congressional career, Rep. David Rivera (R-Fla.) has earned the dubious distinction of being the first member of the historic class of House GOP freshmen to find himself at the center of an ethics scandal.

Well, that’s pretty impressive.  What rules of the House did Rivera manage to violate so quickly?

The 45-year-old Rivera, who was elected to the House in November after eight years in the Florida Legislature, has been under investigation by the Florida Department of Law Enforcement since last fall over allegations that he failed to disclose more than $130,000 in loans from a company owned by his mother. Rivera has since repaid the loans by selling off some real estate, but there are least two parallel probes into his finances and campaign records going on now, and Democrats have seized on the controversy to embarrass the House GOP leadership.

Cantor aides counter that the majority leader is aware of the allegations swirling around the Florida freshman, but they note that the state probe is ongoing, and Rivera has not been charged with any wrongdoing at this point. So at this point, Cantor will not take any stance on what should happen in the Rivera case.

Aside from refusing to seat him to begin with, it’s not clear what else the Republican leadership is supposed to do here. He’s not accused of violating House rules or Federal law or, indeed, any malfeasance of any sort as a Member. Rather, he was under investigation for violating Florida rules and somehow managed to get elected, anyway.

At this point, Rivera is almost surely entitled to perform his duties unless and until charges are filed in Florida.

While awkward, it’s hardly evidence of hypocrisy or a violation even of the spirit of the “zero tolerance” policy.  Rangel and Waters were found to have committed actual misconduct as Members. That’s simply a different kettle of fish.

via John Cole, who I gather disagrees.

Update (Doug Mataconis): Legally there is nothing the House of Representatives could have done here. In Powell v. McCormack the Supreme Court held that Congress cannot refuse to seat an elected member who meets the qualifications set forth in Article I, Section 5, Clause 1.