Does it matter if the controversial McChrystal comments were "off the record" ? No, it doesn't. 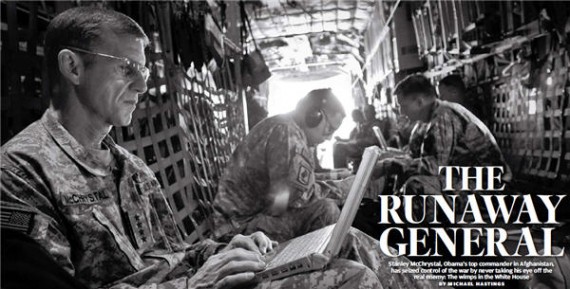 The Stanley McChrystal story has taken a new, and very interesting turn, with members of the military now saying that much of the material in the article that led to McChrystal’s removal from command occurred in conversations that were clearly “off the record”:

A member of McChrystal’s team who was present for a celebration of McChrystal’s 33rd wedding anniversary at a Paris bar said it was “clearly off the record.” Aides “made it very clear to Michael: ‘This is private time. These are guys who don’t get to see their wives a lot. This is us together. If you stay, you have to understand this is off the record,’ ” according to this source. In the story, the team members are portrayed as drinking heavily.

Bates said the contention that the night at the bar and other instances in which derisive comments were made about administration officials were off the record was “absolutely untrue.” Hastings was traveling Friday, and an automated response from his e-mail account referred queries to Rolling Stone.

Neither McChrystal nor members of his staff have denied making any of the remarks quoted in the story, including a description of Obama as “uncomfortable and intimidated” in his first meeting with the general and a reference to national security adviser James L. Jones as a “clown.”

Adm. Mike Mullen, chairman of the Joint Chiefs of Staff, told reporters Thursday that the atmosphere of disrespect for civilian leaders that McChrystal apparently tolerated and participated in was grounds for dismissal regardless of the context in which the offensive comments were made or who made them.

A U.S. military spokesman in Kabul, Air Force Lt. Col. Edward T. Sholtis, acknowledged that Hastings, like other reporters who have interviewed McChrystal over the past year, was not required to sign written ground rules. “We typically manage ground rules on a verbal basis,” Sholtis said. “We trust in the professionalism of the people we’re working with.”

And, at least in the fact-checking process, it seems like they may have a legitimate complaint:

Officials also questioned Rolling Stone’s fact-checking process, as described by Bates in an interview this week with Politico. “We ran everything by them in a fact-checking process as we always do,” Bates said. “They had a sense of what was coming, and it was all on the record, and they spent a lot of time with our reporter, so I think they knew that they had said it.”

In an interview Friday, the managing editor, Will Dana, said the reporter’s notes and factual matters were exhaustively reviewed.

But 30 questions that a Rolling Stone fact-checker posed in a memo e-mailed last week to then-McChrystal media adviser Duncan Boothby contained no hint of what became the controversial portions of the story. Boothby resigned Tuesday.

In the e-mail, a copy of which was provided to The Washington Post by a military official sympathetic to McChrystal, Boothby is asked to confirm the makeup of McChrystal’s traveling staff on the Paris trip and the communications equipment they brought with them on an earlier visit to London. “They don’t come close to revealing what ended up in the final article,” the official said.

“Does McChrystal’s staff joking refer to themselves as Team America?” the fact-checker asked. “Not really,” Boothby replied. “We joke that we are sometimes perceived that way by many of the NATO forces” under McChrystal’s command.

In the article, Hastings wrote that McChrystal and his aides “jokingly refer to themselves as Team America, taking the name from the South Park-esque sendup of military cluelessness, and they pride themselves on their can-do attitude and their disdain for authority.” In other passages, Hastings took what appear to be similar minor liberties with the facts as Boothby described them.

In the last question, the fact-checker asked: “Did Gen. McChrystal vote for President Obama? (The reporter tells me that this info originates from McChrystal himself.)”

Boothby replied in all capitals. “IMPORTANT — PLEASE DO NOT INCLUDE THIS — THIS IS PERSONAL AND PRIVATE INFORMATION AND UNRELATED TO HIS JOB. IT WOULD BE INAPPROPRIATE TO SHARE.” He went on to describe the “strict rules” under which military personnel keep their political views to themselves.

In the article, Hastings reported that the general “had voted for Obama.

Of course, even if all of this is true, McChrystal and his staff is still at fault for allowing a reporter access to conversations that never should take place in public to begin with. Regardless of what the understanding regarding what is “off the record,” if a reporter suddenly starts hearing the top Commander in Afghanistan and his staff talking derisively and contemptuously about senior civilian officials he’s going to write about it.

As this story and the Dave Weigel incident both point out, there really isn’t such as thing as “off the record” when you’re talking to a reporter.