It is impossible to read Dirty, Sexy Politics and come away with the impression that you have read anything other than the completely unedited ramblings of an idiot.

“It is impossible to read Dirty, Sexy Politics and come away with the impression that you have read anything other than the completely unedited ramblings of an idiot.”

That’s the thesis statement of Leon Wolf‘s critique of Meghan McCain’s new book for The New Ledger.   Some snippets:

[I]t is clear to everyone who has read Meghan McCain’s twitter feed, her “articles” on The Daily Beast, or her ill-fated campaign blog that Meghan is not a not a paragon of clear reasoning, exemplar of familiarity with facts, nor a model of English language expertise.  And after subjecting myself to 194 continuous pages of her “writing,” it became clear that none of the above-described works truly plumbed the depths of mental vacuity in which Ms. McCain aimlessly and cluelessly drifts.

In the final analysis, however, I determined that most of Meghan’s flaws – such as her unbearable narcissism, delusions of persecution, anti-religious bigotry, and mendacity – couldn’t be chalked up to her manifestly below-average intelligence.  These are blameworthy traits born of a malfunctioning moral compass, and they are laid bare in spades on every page of Dirty, Sexy Politics.  Furthermore, it is important to address them because Meghan McCain’s book is an active attempt to split the Republican Party in two and thereby destroy its ability to win elections.  And even though she is an idiot, she is a useful idiot in the hands of the media and other assorted Democrats, who also want to achieve this goal.

The most obvious problem with Dirty, Sexy Politics is that grammatically, the book appears to be the work of a high school sophomore.  To be more accurate, it appears to be the first draft of an essay written for a high school English class; the one turned in before the teacher makes all the pretty red marks in the margin that helpfully keep students from turning in final papers riddled with comma abuse, sentence fragments, and incorrect punctuation.  Each subsequent page of this book contains one grisly crime against the English language after another.

When I finished reading Dirty, Sexy Politics, I flipped to the acknowledgements section to find the name of the person who edited this travesty, so as to warn incompetent authors of the future away from utilizing this person’s services, but no such person was identified therein. Either this book had no editor, or the editor assigned to the original manuscript threw up his or her hands three pages in and decided to let the original stand as some sort of bizarre performance art, like Joaquin Phoenix’s appearance on Late Night with David Letterman.

Meghan’s primary goal in writing Dirty, Sexy Politics appears to have been to show off her encyclopedic knowledge of who was wearing what clothes on what occasion. From all appearances, it is physically impossible for Meghan McCain to describe a given scene or occurrence without describing in detail what everyone in the room was wearing (and how their hair was done), most especially including herself.

On the whole, I am simply not a talented enough writer to express how truly horrible this book was. The last line of the book implores readers not to let Meghan “pick up this torch alone.” I can honestly say that I was encouraged throughout to pick up a torch in order to burn my copy of Dirty, Sexy Politics, even though I was reading it on a Kindle.

There’s an excellent chance I won’t be reading this book. 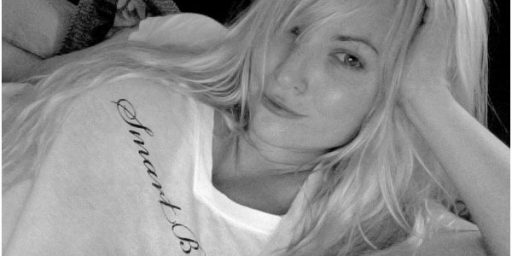