Dodge is facing controversy this morning for using the words of Martin Luther King Jr. in a Super Bowl commercial, but they're not the only party who may have some questions to answer. 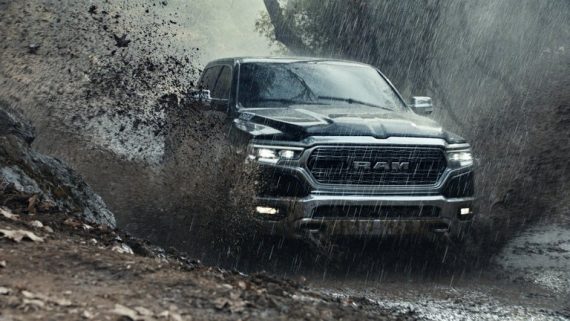 A Dodge Truck advertisement that aired during last night’s Super Bowl is causing controversy for both the car company and the family of Martin Luther King, Jr.:

The online blowback was swift for Ram on Sunday after the carmaker used a sermon given by the Rev. Dr. Martin Luther King Jr. as the voice-over for a Super Bowl ad.

The general sentiment: Did the company really just use Dr. King’s words about the value of service to sell trucks?

The commercial showed scenes of people helping others while Dr. King extolled the virtues of service. At the end, the phrase “Built to Serve” was shown on the screen, along with the Ram logo.

“MLK wanted equal rights and for me to buy a Dodge Ram,” one Twitter user wrote. Another wrote: “Black people cant kneel and play football but MLK should be used to sell trucks during the super bowl. Unbelievable.”

The response put Ram in a position that advertisers dread — misfiring with a commercial in the Super Bowl, which sells 30 seconds of airtime for upward of $5 million and is watched by more than 100 million people.

“It’s the wrong mistake to make given everything that’s going on in the U.S. right now,” said Tim Calkins, a marketing professor at Northwestern University’s Kellogg School of Management. “There’s so much emotion right now around race in this country that this was a high-risk move, and clearly it’s not going over very well.”

The ad came after a tumultuous year for the N.F.L., which had a national spotlight placed on football players who sat or kneeled during the national anthem, a controversial gesture meant to draw attention to racial oppression and police brutality against black Americans. President Trump sharply criticized the players, which heightened some of the rhetoric surrounding the protests.

And while many advertisers release their ads before the game, Ram did not, which added to the social media maelstrom.

“I think it was well intentioned, but they’re going to have a lot of explaining to do,” Mr. Calkins said. “They did not release this ahead of time, so they went for the surprise. They got that, but at the same time, they now have a big problem with feedback and people being upset.”

Adding to the disconnect, the sermon in question, delivered exactly 50 years ago, touched on the danger of overspending on items like cars and discussed why people “are so often taken by advertisers.” That was not lost on the ad’s detractors.

The King Center said on Twitter that neither the organization nor the Rev. Bernice King, one of Dr. King’s daughters, is responsible for approving his “words or imagery for use in merchandise, entertainment (movies, music, artwork, etc) or advertisement.” It said that included the Super Bowl commercial.

Ram approached Dr. King’s estate about using his voice in the commercial, said Eric D. Tidwell, the managing director of Intellectual Properties Management, the licenser of the estate.

“Once the final creative was presented for approval, it was reviewed to ensure it met our standard integrity clearances,” Mr. Tidwell said in a statement. “We found that the overall message of the ad embodied Dr. King’s philosophy that true greatness is achieved by serving others.”

Fiat Chrysler Automobiles U.S., which owns Ram, said in a statement that it was honored to work with the group to celebrate Dr. King’s words about the value of service.

“We worked closely with the representatives of the Martin Luther King Jr. estate to receive the necessary approvals, and estate representatives were a very important part of the creative process every step of the way,” the company said.

As noted, much of the reaction on Twitter soon after the commercial aired was negative:

Not sure MLK’s dream was to drive a Dodge Ram.

OMG someone overlayed that ridiculous Dodge/MLK ad with what King actually said about capitalism and car commercials pic.twitter.com/9IB528mCyt

I’ve driven a Dodge RAM with the best towing capacity in its class, to the mountaintop!

If you don’t like MLK in a car commercial you are going to hate the new Doritos flavor Gandhi is pushing.

And here’s the commercial:

Part of the controversy is being aroused by the fact that the speech from which the quote used came from is taken by some to be something of a criticism of commercialized capitalism. The sermon, which was delivered on February 4th, 1968, fifty years to the day before the commercial ran and two months to the day before King was assassinated in Memphis, is what has come to be called the “Drum Major Sermon” in which King famously downplayed the role he personally he had played in the Civil Rights Movement and even spoke of his own funeral. Much of the sermon speaks of the value of service to others and urged those listening to engage in such service to their community and fellow human beings. In another part of the sermon, though, King ironically cautions against spending money on things such as cars:

[T]he drum major instinct is real. (Yes) And you know what else it causes to happen? It often causes us to live above our means. (Make it plain) It’s nothing but the drum major instinct. Do you ever see people buy cars that they can’t even begin to buy in terms of their income? (Amen) [laughter] You’ve seen people riding around in Cadillacs and Chryslers who don’t earn enough to have a good T-Model Ford. (Make it plain) But it feeds a repressed ego.

You know, economists tell us that your automobile should not cost more than half of your annual income. So if you make an income of five thousand dollars, your car shouldn’t cost more than about twenty-five hundred. That’s just good economics. And if it’s a family of two, and both members of the family make ten thousand dollars, they would have to make out with one car. That would be good economics, although it’s often inconvenient. But so often, haven’t you seen people making five thousand dollars a year and driving a car that costs six thousand? And they wonder why their ends never meet. [laughter] That’s a fact.

Now the economists also say that your house shouldn’t cost—if you’re buying a house, it shouldn’t cost more than twice your income. That’s based on the economy and how you would make ends meet. So, if you have an income of five thousand dollars, it’s kind of difficult in this society. But say it’s a family with an income of ten thousand dollars, the house shouldn’t cost much more than twenty thousand. Well, I’ve seen folk making ten thousand dollars, living in a forty- and fifty-thousand-dollar house. And you know they just barely make it. They get a check every month somewhere, and they owe all of that out before it comes in. Never have anything to put away for rainy days.

But now the problem is, it is the drum major instinct.

As noted above, Dodge is responding to the backlash by saying that point of the advertisement wasn’t to sell trucks but to serve as one of those corporate “goodwill” types of ads that you often see during the Super Bowl, or even just at random times of the year. This explanation rings somewhat hollow, though. While it is true that the commercial doesn’t urge people to go out and buy a Dodge Ram, it’s rather obvious that Dodge, like other companies that create such ads, is trying to raise public esteem for the brand which it in turn hopes to increase the likelihood that someone considering buying a pickup truck or other vehicle would think positively about Dodge rather than, for example, Ford, Toyota, or Chevrolet. It’s similar, for example, to a McDonald’s commercial that has been running for the better part of the year which touts the company’s programs designed to help employees prepare and pay for college, an obvious effort to push back against bad press in recent years over the wages its franchisees pay to employees and the broader fight for a higher minimum wage. That commercial doesn’t mention Big Macs or French Fries, but it’s obviously an attempt to burnish the corporate brand, and the Dodge campaign is of the same genre. To that extent, then, the Dodge ad was as much about “selling trucks” by increasing public perception of the company as it was about praising community service, or whatever the heck the message Dodge was trying to convey might have been.

Given the sensitivity of racial issues in the country, especially as they have been aggravated and intensified during the first year of the Trump Administration as well as the way many conservatives reacted to the Presidency of Barack Obama, one would think that Dodge and its advertising company would have been more careful about using the words of Dr. King in a commercial like this. Even if one takes Dodge at its word and assumes they really did have good intentions in creating and running the ad, the potential controversy it could cause should have seemed obvious to them. As the New York Times article quoted above notes thanks to President Trump and his efforts to fan the flames of racial politics with his attacks earlier this year on player protests during the National Anthem and his remarks in the wake of the tragedy in Charlottesville, race issues related to the National Football League have been particularly sensitive this year. Additionally, the idea of the commercial use of the words of a figure such as Dr. King would arouse controversy. Perhaps that could have been avoided to some extent if Dodge had leaked the commercial before the game as many advertisers do and offered a more lengthy explanation of the ad’s intent, but the manner in which it was done was clearly a surprise to many people and that is undoubtedly part of the reason for the vehemence of some of the negative reaction.

In addition to Dodge, though, one does have to wonder about the motivations and intentions of the representatives of Dr. King’s estate, which largely consists of his surviving children and other family members. As is well-known at this point, the King estate has jealously and strenuously guarded the extent to which images and recordings and even the very words, of Dr. King can be used even for educational purposes and have largely done so because they long ago took the somewhat controversial step of copyrighting the vast majority of his sermons and speeches, including his most well-known address, the “I Have A Dream” speech delivered during the March on Washington in 1963.  In order to use even the small snippet of Dr. King’s words in the commercial, Dodge needed the permission of King’s heirs and the others responsible for managing the King estate copyrights. That agreement apparently came after negotiations that apparently included some form of approval of the advertisement by the estate, although it’s not clear if there was any money paid to the estate in exchange for the use of King’s voice and words. Even if there wasn’t money exchanged, though, one does have to wonder why the estate would approve a commercial use like this given their otherwise aggressive defense of their copyrights even when someone uses Dr. King’s words for educational or other non-commercial purposes.