Another big night for Donald Trump puts him another step closer to being the presumptive GOP nominee. 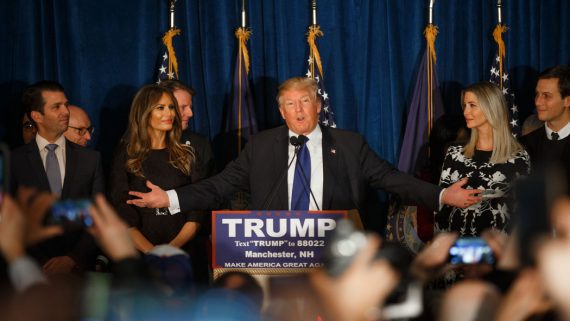 After a weekend of doubts thanks to wins racked up by Ted Cruz, Donald Trump once again dispelled the doubts about his campaign with wins in three out of four states headed into what may be the biggest week of the campaign:

Donald Trump won convincing victories Tuesday in the Michigan and Mississippi primaries, as well as the caucuses in Hawaii, suggesting that the intensified GOP establishment assault on Trump’s character and record had not yet wounded the front-runner for the Republican presidential nomination.

Sen. Ted Cruz (R-Tex.) came in second in the Hawaii caucuses. But he won Idaho decisively, followed by Trump in second and trailed by Sen. Marco Rubio (Fla.) and Ohio Gov. John Kasich.

But the night’s marquee event was in Michigan, where late returns showed Kasich and Cruz still competing for second place behind Trump. In Mississippi, Cruz ran a distant second. Finishing far behind in both states was Rubio, who was on track to record some of his poorest results of the season and was in danger of not qualifying for a single delegate in either state, nor in Idaho.

Tuesday’s contests come at a critical juncture for the Republican Party. The runaway front-runner only a couple of weeks ago, Trump was forced onto the defensive over the past week by his own missteps and by a barrage of savage attacks from his rivals and opposing super PACs.

But Trump prevailed — and sought to seize the mantle of the party’s presumptive nominee as he claimed victory Tuesday night.

Speaking from his golf club in Jupiter, Fla., Trump delivered an impassioned and colorful defense of his business credentials, his candidacy and his personal brand itself. He vowed to work to reelect fellow Republicans up and down the ballot this fall and argued that his campaign was the only one truly expanding the GOP coalition.

“The turnout has been just massive for every week,” Trump said. “We will take many, many people away from the Democrats.”

With a starkly different fate on Tuesday night was Rubio, who registered embarrassingly low vote totals in Michigan and Mississippi. Late returns showed him running in last place in both states, although he was hopeful of doing better in Idaho and Hawaii, both states where his campaign had made investments.

Rubio, who spent Tuesday campaigning in Florida, where he is under intense pressure to win, sought to brush aside Tuesday night’s results as the returns began rolling in.

“I believe with all my heart that the winner of the Florida primary next Tuesday will be the nominee of the Republican Party,” Rubio told a crowd in Ponte Vedra Beach. He then directly confronted Trump: “It’s not enough to stand up here and say you’re going to make America great again. You deserve to know how.”

Rubio has struggled to recover from a string of poor finishes in recent contests and has been an uneven performer in the two weeks since he went on the offensive against Trump.

In his victory remarks, Trump mocked Rubio for the attacks.

“He became hostile a couple of weeks ago, and it didn’t work,” Trump said. “Hostility works for some people but not for everybody. He would’ve been better off had he kept the original pitter-patter going.”

The scene at Trump’s victory party was surreal, with members of the Trump National Golf Club Jupiter dressed in cocktail attire sipping wine and nibbling from charcuterie boards and fresh fruit.

“What happened to Marco Rubio!? Aww, poor little Marco!” one attendee said after Michigan was called, borrowing one of Trump’s campaign-trail taunts.

Displayed near the candidate’s podium were bottles of Trump-branded wine and Trump-branded water, as well as piles of raw, unpackaged steaks he said were “Trump Steaks,” to push back against detractors who criticized him over those products.

In Michigan, the night’s marquee contest, Kasich was poised to register a relative surprise. The Midwesterner has been largely counted out of the national race, but Kasich campaigned harder across Michigan than any other candidate, holding upbeat town hall meetings throughout the state.

Late returns showed Kasich locked in a close race for second with Cruz, with each receiving about a quarter of the vote. The Ohioan was banking on a strong finish in Michigan to give him a needed jolt heading into his must-win home-state primary next Tuesday.

Addressing supporters Tuesday night in Columbus, Kasich projected victory there in a week.

“Think about where we started,” Kasich said. “In the contest going forward, the three of us that remain — we are in a virtual dead heat.” He was referring to Trump, Cruz and himself — writing off Rubio, whom Kasich’s campaign now sees as a spoiler.

At stake Tuesday were 150 convention delegates, which were to be awarded proportionally based on candidates’ performances by congressional district in each of the four states. Each state has thresholds for receiving delegates; in Michigan, for example, candidates must finish with 15 percent of the vote or better to qualify for delegates.

For Trump, Michigan represented the first test of his electoral strength in the Rust Belt. His populist pitches on trade, economic development and immigration resonated deeply with the working-class voters who flocked to the polls in huge numbers.

Michigan is the kind of Democratic-leaning state — Pennsylvania is another — that Trump and his advisers have argued he could make competitive in a general election.

Trump faced another test in Mississippi, a heavily Republican Bible Belt state where he had long been favored because of his anti-immigration, nativist rhetoric. He held a massive, raucous rally on Monday evening in Madison, Miss.

In both states, early network exit polling reported by CNN showed vast majorities of Republican primary voters were angry or dissatisfied with the federal government.

That data showed that Mississippi primary voters divided sharply along ideological lines between Trump and Cruz, with 46 percent identifying as “very conservative,” the most of any contest this year. Strong conservatives have been Cruz’s best constituency this year, and he led Trump by roughly 10 percentage points in the preliminary data. But Trump led by at least 20 points among Republicans who identify as somewhat conservative or moderate.

Late returns showed Trump winning roughly half of the vote in Mississippi, similar to the landslides he won in Alabama, Georgia and Tennessee last Tuesday. The fact that Trump’s Mississippi margin mirrored his double-digit wins in those states — as opposed to his much narrower, four-point win over Cruz in Louisiana on Saturday — suggested that Trump’s popularity had not slipped among conservatives despite the heavy attacks on him.

Some recent polls nationally and in key states have contained warning signs for Trump, indicating that his refusal to immediately disavow former Ku Klux Klan leader David Duke, his debate-stage quip about his manhood, and fresh attacks on his business dealings and character — or a combination of all three — were taking their toll.

Last weekend’s losses in two out of four contests, along with what seemed like signs that his poll numbers were indeed slipping, seemingly put pressure on Trump to prove that his campaign was not losing momentum at the same time that it seemed as though candidates such a Ted Cruz seemed to pick up momentum, especially in the delegate count. Exit polling out of Louisiana, for example, showed people who had decided on who to vote for were breaking for Ted Cruz, while polling out of Michigan seemed to show Ohio Governor John Kaisch. As it turned out, that polling seemed to be an entirely temporary phenomenon as Trump pretty much performed up to expectations in both Michigan and Mississippi, while Governor Kasich and Ted Cruz proved unable to capitalize  on whatever it was in the states that voted over the weekend that caused them to break against Trump. Instead, Trump has returned to his winning ways, and placed himself closer to becoming impossible to catch in the delegate count.

Ted Cruz scored a success of his own last night, of course, in winning the Idaho Caucuses quite convincingly and coming in a strong second to Trump in both Mississippi and Michigan. The Idaho win is tempered, though, by the fact that, once again, Cruz seems to be proving that the appeal of his campaign is limited given the fact that the only states he has one outside of this home state of Texas and neighboring Oklahoma are caucus states where the electorate is, arguable far less representative than it is in ordinary primary states. While it is true that a win is a win and that even the second place finishes have added to Cruz’s delegate total and helped to prove his assertion that he is the only candidate who can really challenge Trump, limited appeal such as this suggests that Cruz’s appeal is far too limited to truly stop Trump in the weeks ahead.

Last night was likely a disappointment to Ohio Governor John Kasich, who had been hoping for strong second place performance in Michigan to lead into next week’s all important Ohio primary. Instead, Kasich finished third behind Ted Cruz, although it was a close third so perhaps Kasich shouldn’t be so disappointed, especially since he scored his highest percentage of the vote of the 2016 campaign so far. Whether that will be enough to help him in his home state remains to be seen, but it seems clear that we’re headed into a do-or-die campaign week for Kasich and his campaign. A loss in Ohio would likely mean the end of his campaign, and perhaps the end of his political career entirely.

Speaking of candidates teetering on the political edge, nobody is in that position more than Florida Senator Marco Rubio. The Florida Senator finished in fourth place in three of the four contests last night, and failed to win a high enough percentage in any state to pick up a single delegate, thus blunting whatever momentum Rubio may have had after winning the Puerto Rico primary on Sunday. None of this bodes well for Rubio headed into Florida, of course, and this is likely to increase the speculation that Rubio may end up dropping out before Florida ever even votes.

Turning to the delegate count, last night’s win erased the gains that Ted Cruz had made prior to voting yesterday. According to the RealClearPolitics projections, Trump now has 458 delegates, compared to 359 for Cruz, 151 for Rubio, 54 for Kasich, and 8 for other candidates who have since withdrawn. What this means is that Donald Trump has won 44.46% of the delegates awarded to date, and now stands 779 delegates short of winning the majority, which means he has to win 54.02% of the remaining 1,442 delegates yet to be awarded to get a majority. Ted Cruz, meanwhile, has won 34.84% of the delegates awarded and would need to win 60.89% of the remaining delegates to get a majority on the first ballot. Marco Rubio, has won 14.66% of the delegates awarded, and seem to already be mathematically eliminated from winning the delegate needed to win on the first ballot at the convention. The same would be true of John Kasich. Given that, it’s obvious that both Rubio and Kasich find themselves in a must-win situation since winning their home states would, at least theoretically put them back in the delegate hunt, albeit barely. For the foreseeable future, the real Republican contest is between Donald Trump and Ted Cruz, and that seems unlikely to change.