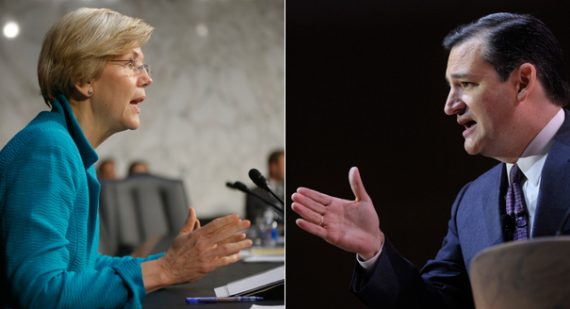 While they are both getting a lot of attention inside their own parties, it appears that endorsements from Massachusetts Senator Elizabeth Warren and Texas Senator Ted Cruz don’t have very much influence on the general public:

The survey asked likely voters in states and districts with the most competitive House and Senate contests this fall to rate how much an endorsement from 10 high-profile political figures split evenly among parties would matter in whether they vote for a candidate.

Obama and the Clintons were essentially tied, with 7 in 10 Democratic respondents saying a nod from any of them would make them more inclined to back the endorsed hopeful. The figure dropped to 52 percent for Vice President Joe Biden and only 27 percent for Warren. (Sixteen percent said Warren’s support would make them less likely to support a candidate.)

The findings are at least in part a function of name ID: Despite the crush of media attention the Massachusetts senator has received, 1 in 5 Democrats likely to vote in a competitive House or Senate election this fall — and 22 percent of voters overall — said they had “never heard of” Warren.

Among Republican voters, 53 percent said Romney’s support would make them more likely to vote for a candidate. Behind him was Bush at 47 percent, and nearly tied was Paul, whom 46 percent of Republicans said would affect them positively. The latter figure is striking as the Kentucky senator tries to demonstrate he can win his party’s nomination despite views on foreign policy that make some donors and centrists uneasy.

In the case of Sen. Ted Cruz (R-Texas), who advocated a government shutdown last year over changes to Obamacare, 30 percent of Republicans said he would have a positive influence on their decision, while 15 percent said he would be a negative. Fourteen percent of likely Republican voters said they’d never heard of Cruz.

As noted, a great deal of this is due to name recognition no doubt, but these poll results do tend to pour some cold water on the arguments advanced by pundits about how people like Warren and Cruz are increasing their relevance with all of these endorsements. Both of them likely do a very good job at bringing out the base of their respective parties, and there is assuredly something important about that, but that is far different from what impact they are having in the middle of the electorate where these elections are decided.