Heather Havrilesky asks, "Why Are Americans So Fascinated With Extreme Fitness? 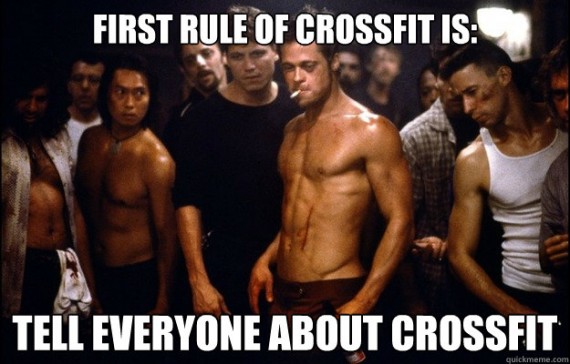 Heather Havrilesky asks, “Why Are Americans So Fascinated With Extreme Fitness?” She actually provides zero macro-level evidence that they are and, indeed, a trip to the local mall would provide a pretty strong indicator that they’re not. Regardless, there’s no doubt that there’s a niche industry out there that’s generated some enthusiasm.

Fitness culture couldn’t have changed more significantly since the late ’60s. Back then, residents of my small Southern hometown would spot my father, an early jogger, and yell out of their car windows, “Keep running, hippie!” These days there aren’t that many joggers in my Los Angeles neighborhood, but every other block there’s another fitness center offering boot-camp classes or Brazilian jiujitsu, with people inside punching, kicking and yelling at one another like drill sergeants. Jim Fixx’s freewheeling running disciples have been replaced by packs of would-be Navy SEALs, sprinting up sandy hillsides with backpacks full of rocks strapped to their shoulders.

Jane Fonda and Richard Simmons once painted exercise as something fun and faintly sexy — a lighthearted trip to a sweaty nightclub in your own living room — but fitness today isn’t supposed to be easy. The “Abdomenizer” and “8-Minute Abs” videos, which practically suggested that exercise could be squeezed in between bites of your hamburger, are now quaint punch lines. By the ’90s, when the soft curves of Ursula Andress had been replaced by the hard bodies of Cindy Crawford and Elle Macpherson, you still worked out to prepare for the beach or the bedroom. These days, though, you aren’t preparing for fun or romance. You’re preparing for an unforeseen natural disaster, or a burning building, or Armageddon.

We have sought to build a program that will best prepare trainees for any physical contingency — not only for the unknown, but for the unknowable.” This dark talk passes for welcoming language on the website of CrossFit, the intense, ultracompetitive conditioning program whose motto, “Forging Elite Fitness,” reflects our current fascination with both elite athletes and elite military forces. In spite of (or because of) the fact that CrossFit is now nearly synonymous with overexertion, there are more than 6,000 affiliates in the United States.

Again, I’m not sure 6000 affiliates, most of which are doubtless niche operations, in a continental sized country with 310 million people is evidence of a craze. Still, even in my own circles—which, granted, are a bit skewed since I teach at a Marine Corps institution—there are quite a few devotees of CrossFit, PX90, and other “extreme” or “boot camp” style programs.

Joshua Foust thinks nihilism is at least part of the answer. And maybe so. But I think the explanation is more simple: the cultural ideals for both sexes have become radically more unrealistic while the population has gotten ever more sedentary and out-of-shape.

Now, I don’t recall Richard Simmons ever being considered sexy. As I recall, his origin story was as a former fatty who got himself in shape and wanted to inspire others to do the same. His appeal was enthusiasm and kitsch, not sexiness.  He wasn’t trying to form an army of lean, mean fighting machines but to rid the world of disgusting fatbodies. Mostly to make them feel better about themselves.

Not too long after Simmons became a household name, though, the male ideal changed significantly, seemingly overnight. Simmons never represented it, of course, but the difference between Paul Newman, John Wayne, and Burt Reynolds on the one hand and Arnold Schwarzenegger, Sylvester Stallone, and Jean-Claude Van Damme on the other is palpable. Even actors playing non-action roles were suddenly decidedly more muscular and lean than their counterparts from decades past.  And the older cohort were mostly star athletes in their own right.

While I think the Ursula Andress to Cindy Crawford and Elle Macpherson example a poor one—the Andress who came to fame in that bikini in the first James Bond flick had a body every bit as fit as Crawford and Macpherson in their heydays—it’s true that the female ideal has changed as well. Extreme muscle is still a niche appeal but women now are supposed to look like they spend hours at the gym.

Given a more sedentary, less fit population, that’s a problem in its own right. Additionally, for males, especially, there’s a not-so-subtle pressure that we’re not really manly unless we’re Navy SEALs, MMA fighters, or football players. As we’ve more and more moved into jobs sitting on our butts behind a computer—often with a woman in the next cubicle doing the same job—there’s a sense that we’ve lost some essential manly quality. So, for men at least, the quasi-military or quasi-two-a-days mentality of the extreme workout programs offer a way of regaining that. It’s essentially the “Fight Club” fantasy without the bruises.