Debunking urban legends and Internet rumors is harder than it used to be.

Clicking on a sidebar link from another story on Medium, I came across Colin Dickey‘s piece from a couple weeks ago “Snopes Debunked the World. Then the World Changed.” While much of it is familiar, it’s nonetheless depressing for those of us in the ideas industry.

Over the past 25 years, the internet has gone from a place of possibility and promise to a dreary slog. Nowhere is this more evident than in the evolution of Snopes.com, a website that once brought a great deal of joy to the internet explorer. Since its founding in 1995 by husband and wife David and Barbara Mikkelson, Snopes’ mission of “debunking” has changed in ways both subtle and inexorable, from targeting urban legends like Bigfoot to unpacking QAnon conspiracy theories. The distinction may seem slight — both are false stories whose appeal lies in their capacity to spread and multiply — but a wide gulf separates their respective impacts. Understanding why the tools that work on urban legends fail to work on conspiracy theories is one way of understanding how our relationship to facts has changed, and it may offer some insight on how to rebuild a world of consensus instead of fear.

While I don’t know that the Internet is any more of a “dreary slog” now than it was in the days of Usenet, BBSes and AOL message boards—not to mention 2400 baud modems—Dickey’s central argument is nonetheless compelling. And, yes, I remember all of these:

Snopes came on the scene at a time when a large portion of the internet consisted of email forwards. One I remember clearly from that era was Bill Gates’ “Beta Test,” an email chain letter that circulated endlessly in the late 1990s and early 2000s. It was a simple email, supposedly from Gates, regarding an “e-mail tracing program.” “I am experimenting with this and I need your help,” the email read. “Forward this to everyone you know and if it reaches 1,000 people everyone on the list will receive $1,000 at my expense.” This email and its subsequent variations were forwarded endlessly, often with the caveat “This is probably fake, but what do I have to lose?”

Reading Snopes’ early archives offers a nostalgic trip to our earlier ignorance, a simpler time when people thought that Axl Rose had just died — or was it Steven Seagal, or Britney Spears? It debunked the original Bill Gates email chain story, along with the HIV needle story multiple times.

This sort of nonsense still abides, of course. But, as Dickey explains, it’s relatively easy to debunk.

The power of an urban legend depends in part on its vagueness, but also its specificity. Folklorist Jan Harold Brunvald, whose 1981 book The Vanishing Hitchhikerwas one of the first sustained examinations of urban legends, notes that a folk legend “acquires a good deal of its credibility and effect from the localized details inserted by individual tellers” — highway names, local landmarks, etc.

It’s this essential ingredient of urban legends that makes them susceptible to fact-checkers. Friend-of-a-friend stories lose their believability once you can Google the friend of a friend’s actual name, and they lose much of their power once you can trace how they’ve mutated and spread, placing each story alongside all of its various variants. Snopes was able to build its reputation and its following on this pretense — that diligent research could discredit even the most virulent of stories.

Reading Snopes in the era of urban legends reassured us that the world wasn’t as scary as we thought, but it did more than that. Urban legends also have the capacity to generate shame. Believing them is seductive, but as soon as one is debunked, you might feel dumb and sheepish for thinking you could ever believe it in the first place. Snopes allowed us to feel superior to those who’d been duped while covering up our own gullibility. It was the lights in the theater coming on after the horror movie—reassuring, but in a way where no one ever had to know how scared you were in the dark.

Learning not to fall for urban legends was a kind of rite of passage in the early internet. Not only was discovering the truth pleasurable, it created a community of truth-seekers. Readers of Snopes were the smart, savvy consumers of the internet, equipped to navigate it without falling for nonsense.

These days, most of the Top 50 stories on Snopes (as of this writing) are explicitly political: rumors, lies, and fabricated screenshots concerning Joe Biden, Alexandria Ocasio-Cortez, Kamala Harris, and Nancy Pelosi. Others are attempts to unravel the still-unfolding story of what happened on January 6, when a conspiracy theory-addled mob launched a treasonous assault on the Capitol. The site still does the work of debunking, but surfing it now is an exercise in exhaustion and dismay.

The slow evolution of Snopes’ focus began with the September 11 attacks, as the Mikkelsons found themselves increasingly responding to conspiratorial (and often anti-Semitic) rumors about who brought down the towers. By the time Barack Obama was elected, the partisan nature of such rumors was increasingly evident: Despite attempts to maintain neutrality (David Mikkelson told Wired‘s Michelle Dean that he was “essentially apolitical“), Fox News and other right-wing sources targeted Snopes as a stalking-horse for liberal bias. And as conspiracy theories surrounding Snopes continued to swirl, the site itself slowly moved from deep-fried rodents to the Deep State.

Indeed, while all of Dickey’s examples are of right-leaning hoaxes there are plenty of left-leaning ones in the top 50 list. Regardless, it’s easy enough to fact-check lies about politicians, right?

[T]he old tactic of sunlight as disinfectant fails to work on these stories. Because they reinforce one’s preexisting political beliefs, they’re resistant — if not immune — to fact-checking. As researchers have demonstrated for decades, once we’ve made up our minds about something, we rarely change it, even (in the words of psychologists Craig A. Anderson, Mark R. Lepper, and Lee Ross) “after the initial evidential basis for their beliefs has been totally refuted, people fail to make appropriate revisions in those beliefs.”

In The Enigma of Reason, Hugo Mercier and Dan Sperber point out that argumentative reasoning works not by looking for evidence of one’s preexisting beliefs, but that one looks for evidence that opposing beliefs are wrong: “Reasoning does not blindly confirm any belief it bears on. Instead, reasoning systematically works to find reasons for our ideas and against ideas we oppose. It always takes our side.”

People can clearly change their minds on political matters. My friend and co-blogger Steven Taylor and I have known each other for well over two decades and we’ve both changed our minds on more issues than we can count over that time. Indeed, we’ve both been blogging since early 2003 and have changed a ton during that time. And we’re both hard-core political junkies who had a lot invested in our priors. (Conversely, we’ve both failed to turn away from our Dallas Cowboys fandom despite futility that stretches back to before our friendship.)

Still, there’s no doubt that it’s harder to change one’s mind about political beliefs—many of which are more attitudes and cultural biases than analytical conclusions—than about whether Abe Vigoda is still alive. (He was falsely declared dead way back in 1982 but was still with us in 2009. Alas, we lost him in 2016.)

And, Dickey argues, the incentives are flipped:

Conspiracy theories also invert those feelings of gullibility when one has fallen for an urban legend. With conspiracy theories, it’s the sheeple willing to take the word of public health experts and politicians who are the naive ones. Given their perpetual ironic distance from accepted fact, conspiracy theorists resist being shamed no matter how much debunking you subject them to.

As such, Snopes’ long-held formula of wry, patient debunking has increasingly fallen on deaf ears. And as authority, expertise, and facts themselves have all been called into question, the whole mechanism of debunking has lost its power. Responding to your racist cousin’s Facebook post with a Snopes.com link may be satisfying, but it’s unlikely to accomplish anything. If the act of fact-checking once helped foster a community of savvy email consumers who bonded via their superior understanding of urban legends, conspiracy theorists have instead built their own affinity groups — and those social bonds are much harder to disrupt via simple fact-checking.

Now, I have in fact managed to persuade Facebook friends that they were wrong on a particular factual claim by pointing to a Snopes link or a major media factcheck. But the real problem is that debunking a particular assertion does very little to change the worldview that made the lie seem plausible to begin with.

Whether a given celebrity is dead is pretty easy to demonstrate and, since people have little reason to hold on to the false belief, it’s easy for evidence to change minds. But if you believe the Federal government hates Blacks or gay people, it’s next to impossible to convince them that crack cocaine or the AIDS epidemic weren’t government conspiracies. The false trail just shows how clever they are! And, if you believe Nancy Pelosi, Kamala Harris, or AOC are out to destroy America, there’s no amount of individual lies that can be disproven to undermine the underling assumption. 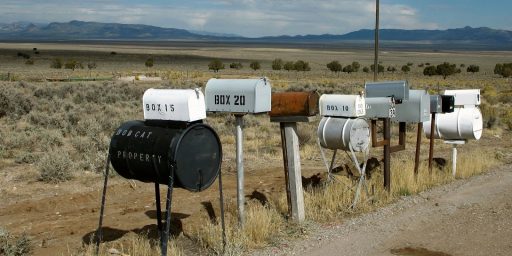