The architect of President Obama's re-election campaign is going to work for the Tories. 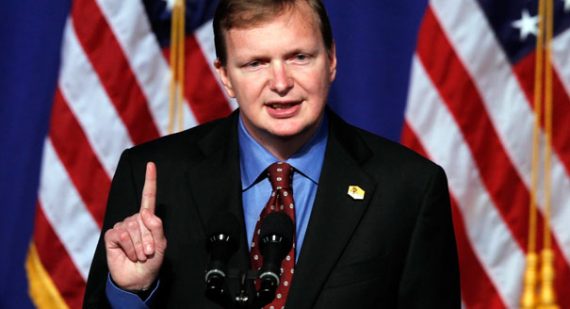 The architect behind President Barack Obama’s successful 2012 campaign is broadening his reach across the pond: Jim Messina has been hired by Britain’s Conservative party for the upcoming general election.

Messina will stay stateside and work in a support capacity.

“I have long admired Prime Minister Cameron. While I will not be moving to London, nor will I be managing any type of day to day political operations, I will be offering strategic campaign advice leading up to 2015,” Messina said in a statement to POLITICO.

The Tories hired Messina in hopes to emulate the strategy of Obama’s campaign for reelection, the BBC reported Friday, especially the way it used political organizing and social media strategies.

Messina is not alone among the Obama team in working overseas.

The BBC notes that Messina is likely to stay based in the United States and that his work will be concentrated in specific areas:

Mr Messina will not lead the campaign as he did in the US, sources said, but instead will be “reporting in to the Conservatives’ senior management team”, and remain based in the US.

He will report directly to Mr Crosby and Conservative Party co-chairs Grant Shapps and Lord Feldman. Conservative sources stressed he would have no involvement in party policy.

“I have long admired Prime Minister Cameron. While I will not be moving to London, nor will I be managing any type of day to day political operations, I will be offering strategic campaign advice leading up to 2015.”

The phenomenon of American campaign advisers going overseas to work for foreign politicians is not unprecedented, although it is a relatively recent phenomenon that didn’t seem to develop until the Clinton Era. Back then, James Carville and several of his people were doing work for candidates in the United Kingdom and Israel, and as the linked article notes there are presently others affiliated with the Obama campaign working in Australia and the U.K. What’s slightly unusual about this move, I suppose, is that Messina is seemingly crossing ideological lines in going to work for the Tories. In the past, Democratic consultants have typically worked with foreign political parties on the left while Republican consultants have worked with those on the right.

Of course, as The Atlantic Wire’s Philip Bump, points out, the Tories are actually closer to the Democratic Party than they are the Republican Party. They support a right to abortion, within limits, while the official Republican position is to do everything possible to restrict abortion rights. They oppose the death penalty, which is actually different from the official position of both the GOP and Democrats, although in reality likely closer to the feelings of most Democratic activists on the issue. They support Britain’s National Health Service, the idea of increased investment of renewable energy, and carbon taxes. And a Tory led government just guided a law legalizing same-sex marriage through Parliament, while the Republican Party continues to oppose even the limited equality of civil unions. Among the only issues where Tories and Republicans agree are government spending, stricter border security, and the general approach to foreign policy (although even here there isn’t much difference between the Conservatives and Labour anymore.) So, Messina isn’t really betraying any ideological loyalties by signing on to the Tories 2015 campaign.

What Can Republicans Learn From The Tory Victory In Great Britain?