Thursday’s General Election in the United Kingdom also involved a face-off between two men behind President Obama’s victories in 2008 and 2012:

“Congratulations to my friend @Messina2012 on his role in the resounding Conservative victory in Britain,” Axelrod wrote on Twitter.

The surprisingly decisive victory for Prime Minister David Cameron and his Tories also delivered a big win to Jim Messina, President Barack Obama’s 2012 campaign manager, who advised the Conservative Party and triumphed over his fellow Obama aide, Axelrod, who advised the Labour Party.

Both were gracious, downplaying any talk of rivalry.

There was “no bet, but he’s my brother,” Messina said of Axelrod during an interview Friday on MSNBC’s “Morning Joe.”

Despite the drastic differences between British and American elections — U.K. elections have no television advertising, the dominant medium in U.S. campaigns, along with an openly partisan press and far less fundraising — Americans have long worked on both sides of the British aisle. A slew of advisers to President Bill Clinton worked for Prime Minister Tony Blair, often considered Clinton’s partner in liberal centrism. Pollster Stanley Greenberg, for one, has long advised the Labour Party.

“All elections are always about the future, especially an economic future,” Messina said on MSNBC, arguing the results “stunned the world.” “It looks like he’s going to have an absolute majority which I don’t think many people thought we’d have.”

He also slammed the way-off-the-mark predictions going into the election.

“I think most public polling is garbage, and is wrong,” Messina said from London.

As noted, the presence of Messina and Axelrod became something that British newspapers on both sides of the aisle paid attention to:

In the lead-up to the election, Messina and Axelrod and their potential rivalry were often the focus of the British press. Conservative-leaning papers went out of their way to point out Axelrod’s relatively low visibility and repeatedly mentioned his reported £300,000 salary. Miliband described the Chicago-based operative, who has largely retired from consulting and now works at the University of Chicago, as “a huge asset to our campaign as we work to show the British people how we can change our country for the better.”

But in an interview with POLITICO Europe in the days before the election, Axelrod made clear he played a smaller role.

“Consulting on the phone, mainly consulting on message. I’ve been here half a dozen times,” he said.

Messina, whose role in the Conservatives’ re-election strategy was downplayed from when he was first hired, didn’t receive as much harsh treatment but his actions were still closely tracked by the British media.

As I noted when it was first announced that Messina would be going to work for the Tories nearly two years, the phenomenon of American political advisers going to work in foreign elections is hardly new. James Carville, the mastermind behind much of Bill Clinton’s 1992 Presidential campaign, gave up working on domestic politics for the most part after that 1992 campaign, but subsequently providing services in a number of foreign campaigns, including Tony Blair in the United Kingdom’s 2001 General Election, Ehud Barak in Israel’s 1999 Knesset elections, the Liberal Party of Canada, and the 2002 campaign of Bolivian President Gonzalo Sanchez de Lozada. In addition to Carville, other former Clinton campaign advisers, as well as a few Republicans, have worked as advisers to candidates and parties in foreign elections, usually in either the United Kingdom or Israel. Not all of them had the same kind of direct involvement that Carville did in the cases noted above, or that Messina apparently did in the just-concluded Tory campaign, of course, but there does seem to have become some sort of second career for many of theses advisers in nations where political campaigns are neither as long, nor as media intensive, as they are here in the United States.

Not surprisingly, the presence of American advisers has often been a source of criticism by members of opposing parties and some foreign political analysts who seem to see them as making the campaigns too American. Take, for example, some of the criticism that have apparently been leveled during the just concluded British elections:

“What I’m seeing in this election is the influence of these big American advisers and it’s becoming the most negative, personal and nasty campaign I’ve ever seen,” Nigel Farage, the leader of the United Kingdom Independence Party, told a radio station in the months leading up to the election. Farage lost his seat in Thursday’s election.

Following the race from here in the United States, there does seem to have been some degree of negativity in the just-concluded British elections. The most notable example of that, perhaps, is the effort that the Tories made in the past several weeks of the campaign to suggest to voters that a vote for Labour was a vote to give the Scottish National Party, and its leader Nicola Sturgeon, more power in Parliament, with the implication that doing so could lead to a repetition of the national crisis that surrounded last year’s Scottish Independence Referendum. I didn’t get the impression, though, that the campaign was any more “negative” than past British elections. The nation’s famously partisan newspapers, for example, have always been the way they are, it seems. Additionally, the fact that political commercials on television are not a phenomenon in British elections the way they are here means that there’s a hard limit on just how “negative” a campaign can get. Given that, I’m not sure that the criticisms that people like Farage leveled have very much merit.

I’ve never been entirely convinced that American political strategists are all that helpful in elections out the the United States, but I suppose they wouldn’t get hired if their clients didn’t think they could provide some value. In this case, while it’s unclear what Messina did for the Tories than any of their own strategists could not, it’s nonetheless a victory he can count as one of his own, and it does give him some bragging rights over Axelrod, so I suppose that’s worth something.

What Can Republicans Learn From The Tory Victory In Great Britain? 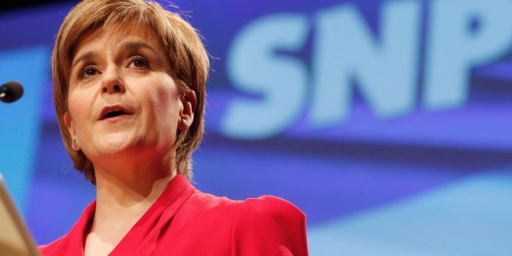