After years of calls for a College Football playoff, we'll finally get one. Let the criticism begin. 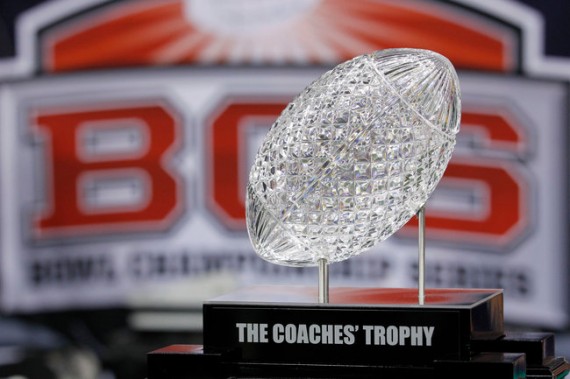 WASHINGTON — The university presidents stood on a stage in a hotel ballroom Tuesday, smiling and satisfied that the college football playoff system the nation had clamored for had been agreed upon in three hours.

After all the controversy surrounding the much-derided Bowl Championship Series, after the annual debates about which teams deserved to play in the national title game, a four-team playoff will be implemented in the 2014 season.

The four semifinalists will be selected by a committee, much as the field for N.C.A.A. basketball tournament is set. No conference will automatically qualify one of its teams. The two semifinal games will be rotated among six bowl sites over a 12-year period, and will be played Dec. 31 or Jan. 1. Those bowls have not been selected.

The championship game will be held at a neutral site, and cities will have the opportunity to bid to host the event. The game will be played on the first Monday in January, unless it falls on Jan. 1.

“It will be much like the Super Bowl,” said Jim Delany, the Big Ten commissioner. “You’ll be dealing with civic communities, and I think it’ll be a national process and people have to be very energetic about it. I think it’s going to be great for the sport.”

The B.C.S. Presidential Oversight Committee’s approval of the plan, which was proposed by the commissioners of the B.C.S. conferences, ended a six-month period that was filled with meetings, proposals and seemingly more questions than answers.

“Where we’ve arrived, I think, is a consensus built on compromise,” said John Swofford, the commissioner of the Atlantic Coast Conference.

The University of Nebraska president, Harvey Perlman, said he pushed for a so-called plus-one model that would have added a championship game after the completion of the bowl season.

“There were people who said there were good points,” Perlman said. “But on balance, our four-team playoff was what achieved the most consensus.”

The makeup of the playoff selection committee has not been determined. Its criteria for evaluating teams will include record, strength of schedule, head-to-head results and whether the team is its conference champion.

Swofford said he would like the committee to consist of at least 12 members, leaving leeway in case members must step aside while teams they are associated with are discussed. (The N.C.A.A. basketball tournament’s selection committee has 10 members).

Delany said he expected the committee to include more than 10 but less than 20 members, including administrators and possibly current or former coaches.

Although the playoff will be a welcome change for fans, some dissension will be inevitable. Roy Kramer, a former Southeastern Conference commissioner who was one of the architects of the B.C.S., said the focus would simply shift down a few slots.

“Now there will be controversy over which teams are Nos. 4 and 5 as opposed to 1 and 2,” Kramer said Tuesday in a telephone interview. “But this does broaden participation, and I think that’s what they were looking for.”

Indeed, such controversy would seem to be as inevitable as the criticism that developed over the BCS, which itself was developed to deal with the problems people had with what were then dueling Coach’s and Writer’s Polls that would sometimes result in two different “National Champions.” The computer-based system, taking into account different polls as well as other factors, was intended to have been an objective way to determine rankings between teams that play inherently different schedules in different leagues, and often different styles of football. It was inevitable that fans of teams that would lose out under such as system, such as recent years when Boise State was often placed far down in BCS Rankings largely on the basis of “Strength Of Schedule.” The first time that a similar situation happens to a team that is ranked at 5th or 6th, or 7th or 8th for that matter, you’re going to hear similar complaints about this new system as well.

In the end, though, I’m not sure there is such a thing as a perfect answer to this kind of “problem.” Expand this to a six team playoff and you’re going to get the same criticisms from fans of teams on the bubble. Indeed, you often do hear such criticisms after the selections for the NCAA basketball tournament, although its far less common mainly because that is a 64 team (plus play-in games) tournament. Of course, a 64 game football playoff would be unworkable and I’ve got to think that anything beyond 6 or 8 games wouldn’t work all that great either. After all, the NCAA and the conferences do have to keep in mind that, as the schedule moves in to December and January, they are going to be competing for television time with the NFL Playoffs.

I suspect that we’ll have this playoff system in place for many years before it gets changed again. After all, the BCS has been in place since 1998, although it was significantly revamped in 2004 after the controversy that resulted from the ranking of USC and the impact of the computer-based system on final standings. The tweaks that took place during this team didn’t satisfy the critics, though, so we’ll get a playoff and the BCS will be effectively dead after 14 years. So, don’t expect the four-game playoff to change significantly for many years after 2014. In any event, you’ve got your playoff people, and I guess that’s a start, no?