Gates Says He Wants To Leave Pentagon in 2011

Robert Gates says he wants to retire next year, but will the call of duty cause him to stay longer ? 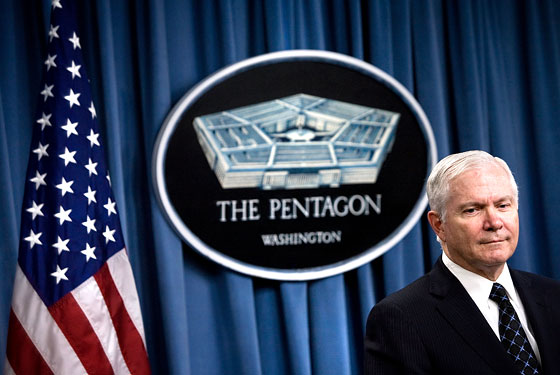 Defense Secretary Robert Gates sat down with Fred Kaplan recently to talk about his time at the Pentagon, his relationship with a Democratic President, and when he sees himself leaving:

With the fall elections looming, the defense secretary’s plans are already the subject of intense Washington speculation. When he agreed to join Obama’s team, Gates thought he might stay for a year. Then came the budget review, in which he was given the leeway to implement many ideas that he’d only talked about under Bush. Then came the Afghanistan review, the results of which would take a while to play out. This summer, he was pushing the budget agenda further, including reforms in weapons contracting (especially the way contractors calculate “overhead,” a vaguely defined money magnet that Pentagon gadfly A. Ernest Fitzgerald once called “the dark side of the moon”) and drastic cuts in the number of military commands around the world (another Cold War relic), which entail similarly drastic cuts in the number of senior officers commanding and staffing them. Gates’s goal is to cut $100 billion over the next five years through these sorts of economies. Aides say that he’s “passionate,” “revved-up,” and “stoked” about the project.

Gates, who turns 67 in September, says he wants to leave the job and retire, this time for good, sometime in 2011. “I think that it would be a mistake to wait until January 2012,” he said. It might be hard to find a good person to take the job so late, with just one year to go in the president’s current term. And, he added, “This is not the kind of job you want to fill in the spring of an election year.”

He pointed out that he’s the 22nd U.S. defense secretary since the position was created in 1947. “If I stay until January 2011,” he said, “I will have been in the job longer than all but four of my predecessors. And those four are Robert McNamara, Don Rumsfeld, Cap Weinberger, and Charles E. Wilson.” He laughed. All four are famous for having stayed long past their welcome. Two of them, McNamara and Rumsfeld, started out energetic and celebrated before tumbling into the traps of ill-considered wars.

Then again, Gates said much the same thing about not wanting to stick around after 2008. Is his new countdown ticker, set to go off in 2011, another “covert action,” as he put it, to discourage Obama from asking him to stay? He certainly doesn’t say so. But if the president does ask, Robert Gates has always been the type to say, “Yes.”

There’s been some speculation of late that Hillary Clinton may end up replacing Gates a the Defense Department, mostly because there seems to be a recognition inside official Washington that there are very few Democrats who have the credibility on national security issues that a Secretary of Defense needs. John Kerry has been one suggested possibility, but that seems even less likely than it was when Obama was first selecting his cabinet and the only other Democrat whose name has been mentioned, Jack Reed, has reportedly already said he’s not interested in the job. Hillary has the national security credentials and, ironically, a good relationship with the Republicans on the armed services committees on Capitol Hill that anyone other than Gates seems to lack, so she would seem to be a logical choice.

Of course, if the President tells Gates that he wants him to stick around for at least the rest of Obama’s current term, I can’t imagine Robert Gates being the kind of guy who would turn such a request down. So, stay tuned.