Think the auto bailout was a success? Think again. 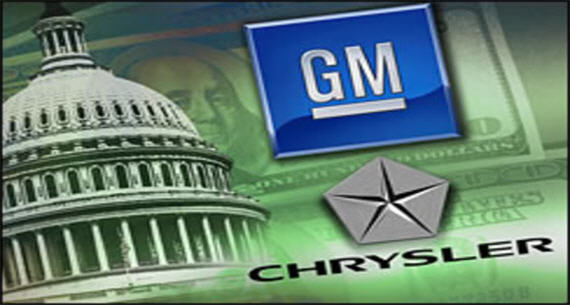 President Obama and his supporters like to point to the bailout of General Motors and Chrysler as examples of his successful economy polices, and there’s no doubt that the moves have been popular in the Mid-West and other areas with close ties to the auto industry. At the same time, though, the jury is still out on just how successful the bailout will actually turn out to be in the long run. Chrysler was once the great example of a turnaround company and considered valuable enough at one point for Damlier Benz to purchase the company. By the time they were forced to file Chapter 11 however, they were a shell of their former selves and ended up being bought lock, stock, and barrel by Italian car maker Fiat. Chrysler, the company founded in 1925 by Walter Chryler, now exists in name only.

General Motors, meanwhile, has allegedly been more successful after stripping itself of several brands and paring down a dealer network that had been far bigger than it ever needed to be. However, as Louis Woodhill notes in Forbes, the company’s future doesn’t look all that bright and a second bankruptcy seems almost inevitable:

President Obama is proud of his bailout of General Motors.  That’s good, because, if he wins a second term, he is probably going to have to bail GM out again.  The company is once again losing market share, and it seems unable to develop products that are truly competitive in the U.S. market.

Right now, the government’s GM stock is worth about 39% less than it was on November 17, 2010, when the company went public at $33.00/share.  However, during the intervening time, the Dow Jones Industrial Average has risen by almost 20%, so GM shares have lost 49% of their value relative to the Dow.

It’s doubtful that the Obama administration would attempt to sell off the government’s massive position in GM while the stock price is falling.  It would be too embarrassing politically.  Accordingly, if GM shares continue to decline, it is likely that Obama would ride the stock down to zero.

GM is unlikely to hit the wall before the election, but, given current trends, the company could easily do so again before the end of a second Obama term.

In the 1960s, GM averaged a 48.3% share of the U.S. car and truck market.  For the first 7 months of 2012, their market share was 18.0%, down from 20.0% for the same period in 2011.  With a loss of market share comes a loss of relative cost-competitiveness.  There is only so much market share that GM can lose before it would no longer have the resources to attempt to recover.

As evidence of GM’s problem’s Woodhill cites the example of the Chevy Malibu, which is being redesigned for the 2013 model year and will have to compete in the market segment dominated by cars such as Honda’s Accord, Toyota’s Camry, Nissan’s Altima, and Hyundai’s Sonata. Because of the importance of this segment of the car market, GM invested a lot of resources into the development of the Malibu and, as Woodhill notes, how the car stacks up against it competitors would be seen as a significant test of the company’s ability to engineer a turnaround and compete in the modern automobile market. Unfortunately for General Motors, the Malibu hasn’t been very well received at all:

Digging deeper, the picture just gets worse.  Despite its mild hybrid powertrain, which is intended to provide superior fuel economy (at the cost of a higher purchase price and reduced trunk space), the 2013 Malibu Eco delivered the same 26 MPG in Car and Driver’s comparison test as the Passat, the Accord, and the Toyota Camry.

In a recent speech, Dan Akerson admitted that GM’s powertrain technology had fallen behind that of competitors in some cases.  This is illustrated by the Malibu Eco’s EPA gas mileage ratings.  At 25 MPG City/37 MPG Highway, the Malibu Eco is not as fuel-efficient as the conventionally-powered 2013 Nissan Altima (27 MPG City/38 MPG Highway).

In addition to the powertrain, the Malibu also suffers from the problem of having a shorter wheelbase than any of its competitors, meaning that the interior ends up being far less comfortable for driver and passengers alike, another potentially bad selling point for the car that is supposed to be leading the turnaround of the new General Motors.

Dave Schuler sums it up nicely at his place:

Essentially, there is no place in today’s market for a company that makes mediocre products and needs to sell a lot of them to maintain its operations. Further, unlike VW GM does not appear to be preparing to make and sell the best cars in the world but to progressively reduce its operations until, presumably, there is nothing left but the smile.

When the federal government bailed out GM there were essentially two viable alternatives. The company could be allowed to resolve its problems in ordinary bankruptcy with the government’s attentions focused on bailing out GM’s employees or GM’s cost basis, most of which is labor costs for employees present and past, could be reduced and the company forced to modify its fundamental way of designing, manufacturing, and selling cars to do much, much more with much, much less, an enormously tall order.

The Obama Administration elected to do neither, choosing to remove top management (as Woodhill puts it “rearranging the deck chairs on the Titanic”), preserve GM’s labor cost problems, and double down on GM’s losing investment on EVs, assuming that the tremendous sales of an enormously popular vehicle which has proved itself anything but would right all wrongs. These were catastrophically bad assumptions. If there were vast demand for street legal golf carts in the United States, I suspect we’d already know about it.

Added on top of all of this is the news released earlier this week that the American taxpayer could end up losing $25 billion on the auto bailout:

American taxpayers could wind up losing as much as $25 billion on the 2008 – 2009 automotivebailout, according to a new report, a figure that has increased by 15% since an earlier forecast, in large part representing the significant downturn in General Motors’ stock price.

Beginning with the outgoing Bush Administration in 2008 and continuing once Pres. Barack Obama took office the following year, the U.S. Treasury invested $85 billion to help the domestic industry survive the deep recession – primarily to fund the post-bankruptcy turnarounds at GM and Chrysler.

But, in a report sent to Congress, the White House raised to $25.1 billion the amount it said it cannot now expect to recover – primarily by selling off the remaining 26% stake it still holds in GM.  The previous quarterly estimate was $21.7 billion. On the other hand, the latest figure is about 45% less than the $44 billion the Obama Administration had once predicted.

The forecast has actually been rising for some months, government analysts last year issuing a projection closer to $15 billion.  And, following the November 2010 GM IPO, there was some hope the Treasury might even break even.  That was based on some industry research, such as one report from influential Deutsche Bank that initially forecast GM shares could eventually top $50 compared to the IPO strike price of $33.

But, in recent months, automotive shares in general, GM in particular, have been tumbling.  The $25 billion government loss forecast was based on a stock price of $22.20 at the end of May.  During the last month, however, the number has dipped to less than $19 a share, though the stock has since rebounded to $20.61 at midday today.

A Treasury spokesman, Matt Anderson, continued to defend the bailout this week, insisting, “Theauto industry rescue helped save more than 1 million jobs throughout our nation’s industrial heartland and is expected to cost far less than many had faeared during the height of the crisis.”

That’s the standard reply one gets from the Administration and from the President’s supporters when the subject of the bailout comes up, but it misses the point. All that money we gave General Motors and Chrysler from December 2008 through May 2009 ended up not being enough to save either one of them from the bankruptcy proceeding that was exceedingly inevitable to anyone paying attention as early as the late summer of 2008. This didn’t start with President Obama, either. It was President Bush who, defying the will of Congress and the American people, used money that had originally been allocated for the TARP bailout and gave it to General Motors and Chrysler. Instead of doing that, he should’ve let both companies go into Chapter 11 right then and there, possibly with government guarantees for the Debtor In Possession financing. In that bankruptcy, the government should have refrained from putting its finger on the scale in the manner that Dave Schuler describes about, largely because that government favoritism has prevented GM from truly addressing the problems it faces in the future. It would have been better for the taxpayers, because they would have saved themselves some $80 billion, and it would have been better for the companies too because it would have permitted them to make the changes necessary to become companies capable of competing in the 21st Century.

Instead, we’ve gotten what we have now and General Motors’ ever shrinking market share suggests that another round of troubles isn’t very far away. What will the people praising the bailout say then?